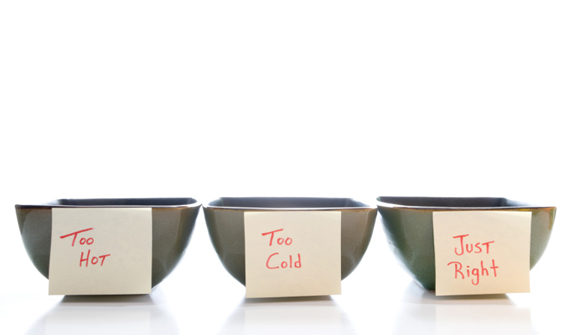 Put Extra Eyes on the Fed … From its actions during the 2008 financial crisis to its policy of quantitative easing, there has been a considerable amount of controversy regarding the Federal Reserve system in recent years. Now that Republicans have taken control of the U.S. Senate, the calls for the U.S. Government Accountability Office to "audit the Fed" have increased and gotten louder. In my view, the GAO should be granted additional authority to audit certain aspects of the Fed's activities. But that authority should be limited and coupled with safeguards to address some of the legitimate concerns Fed officials have expressed. – Bloomberg

Dominant Social Theme: Tame the Fed. Make it more transparent and accountable. But be merciful.

Free-Market Analysis: Just in time to join this larger debate comes the reasonable GAO alternative: Let's make the Fed more accountable but not TOO accountable.

Call this the Goldilocks option. We did some research and found a version of Goldilocks and the Three Bears that took the same approach as this editorial. Here's the important paragraph:

If this were a different era, Goldilocks might well have grown up to work for the GAO. Her judicious approach helped her find the best bowl of porridge. Her attitude – cool yet competent, forceful yet not impulsive – rewarded her with a sweet dish.

Of course, the author of the article, David Walker, is nothing like a young girl lost in the woods. According to his bio at Bloomberg, he is "a former U.S. comptroller general and head of the U.S. Government Accountability Office. He is a CPA with more than 40 years of public, private and nonprofit leadership experience."

But nonetheless, his approach resembles that of Goldilocks. He makes clear his concerns that the Fed not be badgered or intimidated. He is moderate in all ways. In searching for the right temperature, he suggests that the GAO's approach to oversight – competent yet not adversarial – is the one that should be adopted.

In hindsight, the Fed … [helped] to avoid a depression and deflation. Yet, certain financial institutions, along with their shareholders, executives and highly paid employees, benefited from the Fed's actions while many innocent homeowners, taxpayers and savers paid the price for the bad behavior of others. Reforms including the Dodd-Frank Law were intended to reduce the chances of repeating these experiences in the future, but only time will tell how effective they will be.

As a former U.S. comptroller general and head of the GAO, I know that many people and institutions say they are in favor of transparency and accountability – until it relates to them. Such is clearly the case in government, including at the Fed.

Still, given the size, significance and unprecedented nature of recent Fed actions, more needs to be done to enhance transparency and improve accountability at the Fed. Specifically, it's time to employ a "trust but verify" approach by using the GAO, which is an independent and nonpartisan agency, to conduct related audit work in areas other than the Fed's traditional monetary policy activities.

The article goes on to explain why such an approach is called for. The Fed, we learn, needs to have the freedom to conduct monetary policy in a confidential way. But must expand accountability by granting the GAO post-decision audit responsibility.

The GAO, we learn, could conduct "independent post-decision reviews of the criteria the Fed used for acquisition and disposal of major assets, such as Treasury securities, as well as its regulatory, oversight, bailout and other extraordinary decisions."

The article is careful to state that Fed officials should be assured of confidentiality. Also, the GAO and the Fed's inspector general should forge a cooperative relationship so that there is no duplication of effort.

Unfortunately, none of this is going to matter. The reality is that the Fed fixes the price and value of money. It has monopoly authority over the currency of a US$15 trillion economy. Its creation and maintenance does not make its actions a smidgen more economically literate.

Simply, the Fed cannot accomplish its mission. It is responsible for a low rate of price inflation and for "full employment." But the tools it uses are the tools of price fixing. It is the institutional hope that by fixing the volume and price of money, the responsibilities of the Fed can be resolved.

But reality begins a century or so ago when a group of extremely powerful men met on a tiny island in secret to plan what would become the Federal Reserve. These men, in our view, were not interested in the nation's employment rate or even the inflation rate. These men had traveled down to their meeting in disguise because they wished to create a facility that would control the nation's money – and print it on a monopoly basis.

These men were interested in control of the monetary system. Everything since then has been an afterthought. The Audit the Fed movement is thus not a congressional elaboration of a useful facility. At root it must be an effort to try to restrain the brutal machinery of the business cycle itself that puts millions out of work and wrecks families and fortunes on a regular basis.

The stakes are very high here. The audit movement could help blow up the most powerful (and perhaps most wretched) monetary system in the world.

Why should a small group of men be empowered to print trillions and give that money away to their friends and colleagues using the justification that the world's economic system itself is verging on collapse?

Let it collapse? This kind of system has surely devolved into crony capitalism. In fact, it started that way. There is no justification for perpetuating this kind of system. "Audit the Fed" may be the beginning of the end.

The editorial – in all its reasonableness – entirely misapprehends what is at stake and what would be the result of a serious probe of Fed operations. This is not a case of getting the porridge "just right" because there is no "right." You can't elaborate on a system that was meant to control the money of millions by a wealthy few.

We should end by adding that we are not optimistic that the Fed will be audited in any depth. Yet, countering this pessimism is the notion that the era of modern central banking is coming to an end. Thanks especially to the Internet, too many people understand what it really is and how injurious its procedures are to the economies it affects.

No matter what happens to the audit movement, things are going to change for the Fed. The days of this kind of extraordinary interference into the monetary marketplace may well be numbered.