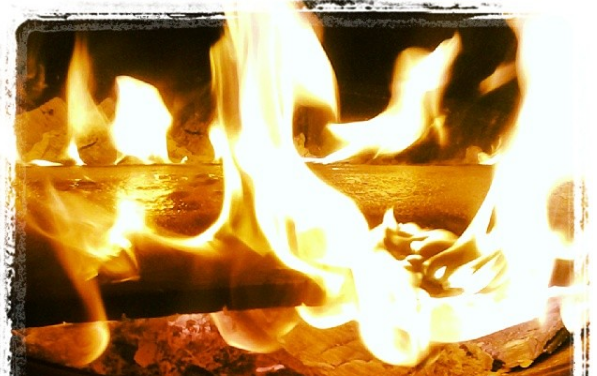 Good food plus interesting people is a recipe for happiness.

It’s tempting to romanticize those days, but they came with some pretty harsh realities. As stressful and lonely as the modern world can be, countless technological benefits have made our lives longer and healthier.

Yet automation and technology have become an end in themselves, rather than a means to live a better life. It is at this juncture that society would do well to examine where we came from, and where we are.

There is no reason we can’t meld the philosophies of our ancestors and our modern world. We can keep the prosperity and reconnect with our roots.

Bad food and social isolation are actually quite related to the industrial age. One of the saddest images I can conjure is someone eating a microwave dinner in front of the tv alone.

Humans evolved mostly foraging and hunting as groups. Strong social ties were inextricable from reaping the most necessary resources.

We don’t need to go back to loin cloths and straw huts to enjoy what our ancestors enjoyed.

But we could take a few pages out of their book.

Sapiens, written by Yuval Noah Herari, is about the origins of the human species, and its evolution up to the present.

When our ancestors were living in nomadic tribes, the childhood mortality rate was high. This brought down the average life span to somewhere in the 30’s. But not many 30-year-olds were dropping dead. It was obviously much harder to deal with traumatic injuries, but overall, people were not much less healthy than humans today.

The foragers’ secret of success, which protected them from starvation and malnutrition, was their varied diet. Farmers tend to eat a very limited and unbalanced diet. Especially in premodern times, most of the calories feeding an agricultural population came from a single crop – such as wheat, potatoes or rice – that lacks some of the vitamins, minerals and other nutritional materials humans need. The typical peasant in traditional China ate rice for breakfast, rice for lunch, and rice for dinner. If she were lucky, she could expect to eat the same on the following day. By contrast, ancient foragers regularly ate dozens of different foodstuffs. The peasant’s ancient ancestor, the forager, may have eaten berries and mushrooms for breakfast; fruits, snails and turtle for lunch; and rabbit steak with wild onions for dinner. Tomorrows menu might have been completely different. This variety ensured that the ancient foragers received all the necessary nutrients.

This is in stark contrast to the modern food pyramid that for years recommended more grains than any other food group. Despite the availability of diverse food in a global market with robust shipping networks, most people today still have a terribly bland diet.

And all this is before we even start talking about the chemicals pumped into modern processed foods as preservatives, pesticides, flavorings, and dyes.

And an actual supportive fulfilling community of strong social ties would help avoid the psychological health detriments of the modern era.

Social lives of ancient humans varied greatly depending on the tribe in which they were a part.

Ever since the Cognitive Revolution, there hasn’t been a single natural way of life for Sapiens. There are only cultural choices, from among a bewildering palette of possibilities.

This is a lesson in itself. Today there is a mass market for culture. Consumers are sold an image to emulate, and accessories to compliment it. There are a few to choose from, but they are basically all a part of the government-corporate-media conglomerate. Even rebelling against the status quo is typically done in a prescribed way, with plenty of products to help.

Harari points out in Sapiens that this is largely by design. We have been lured away from the ties of community, family, and other small scale organic institutions.

In their place, we are sold membership to consumer groups. We feel like we are apart of something, but our only real connection to others in the group is the similar products we buy–or make and sell.

Culture is much more unique than that. Using the internet, I have found communities that I would never have known existed if I was searching in the 1980’s. I found a group of people interested in Startup Societies, which is exactly what I am talking about. People can now break off into micro-societies of their own formation. They can live alongside people with a strong sense of inclusion, without withdrawing from the rest of the world.

I expect this trend will only grow as people feel that corporate and government institutions have failed them.

And I suspect it will make people quite happy. People will rediscover what it means to be a part of a group of their own choosing, not a forced commonality designed by government elites and corporate profiteers.

Just to reiterate, I do not advocate abandoning all the comforts of modern life and moving back into the woods, though at times I am tempted to do so.

I am simply making the case that the pendulum has swung a bit too far on the industrial factory food and mechanized consumer community scale. We can bring it back to center by exploring new ways to organize micro-societies.

For people who were social outcasts in ancient tribal groups, life must have been hell. But today, we can find communities to join, virtual or psychical, all around the world. It is not the luck of the draw, it is a matter of finding where you fit.

And the same goes for healthy, diverse food options. They are available, it is just a matter of proper budgeting, and caring enough to find them.

What I imagine personally is emulating a tribal group, while retaining modern comforts and technology.

I hope to someday live on a technologically advanced organic farm, complete with a food forest, and aquaponics. I want other friends and family of mine to join me, all live on the same large property, and enjoy not just our free time, but our working hours together.

It may sound utopian, but I am not talking about a hippie-commune. I am talking about melding the benefits of ancient community and diet, with the advancements of modern technology and information.

The evidence suggests, and my gut feeling tells me, that this will make me happy and healthy.

But it doesn’t have to be farming based either. I could imagine countless possibilities for small scale societies which come together based on different shared interests, goals, and values.

What would your ideal modern community be?