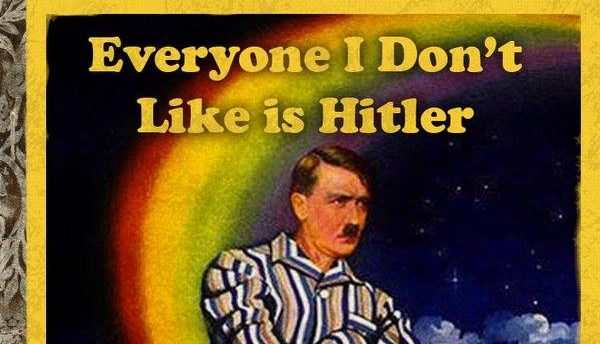 Hitler really really cared about a lot of things. He was passionate. He was dedicated. And he was effective.

Hitler fulfilled his campaign promises, and ran a very efficient operation to do so. An incompetent government was not going to successfully build, connect, staff, and fill a network of concentration and forced labor camps.

An incompetent government, headed by someone who doesn’t really care, could not have tracked down and oppress minorities with such efficiency.

Don’t get me wrong, Hitler was a horrible human being. Obviously, no one to be glorified or emulated.

And that’s my point, because you can’t deny he cared about his cause with religious zeal. His passion for righting the wrongs done to Germany led him down a path which caused millions of deaths. Hitler was dedicated to making Germany the ruling power of the earth because he was so  sure of himself, the Aryan people, and their divine destiny.

I apologize for the Hitler cliche.

They say, whenever someone brings up Hitler, you should leave the conversation. And in general, that’s a good rule of thumb. Usually, at that point, the conversation has devolved into one “side” accusing another of being the most Hitler-like.

Hitler is an easy comparison, the embodiment of evil. I could have said Stalin, or Mao–they each killed many more people than Hitler– but then I’d have to explain myself.

Hitler gives a nice emotional shot to the brain.

And that’s why Hitler comes out when people get emotional. Anyone who accuses someone–or a political party, or a movement–of being Hitler-like because really cares. They really freakin’ care about whatever point they are trying to make. They are passionate about their beliefs and dedicated to their cause.

Which is why “Hitler” is a great signal to stop caring about what they say. That kind of zealotry hints that their beliefs are not purely rational, and that emotions have a strong grip on their opinions.

Time to walk away and say, you know what, I just don’t care.

And I’m not saying they are necessarily wrong. Maybe they are right to be so passionate about an important cause. Maybe they see the truth and are just so frustrated and bitter that they can’t help but lash out.

But you can’t tell the difference between the people with righteous indignation and all the little Hitlers.

A lot of tiny tyrants will never have the opportunity to be as effective as Hitler, thank god, but they would reach such evil heights if they could. And they would do it in the name of their righteous cause that they care so deeply about.

But you can’t tell the difference. So the solution is simple, don’t join a side, don’t evangelize a cause, just stop caring.

Let me pause here before you think I am getting cynical and nihilistic.

Things matter. I’m not saying that nothing makes a difference.

Hitler was elected, after all. So it makes sense to think we need passionate, dedicated people who really care about making sure another Hitler isn’t elected to cause the same destruction.

There were people in Germany who surely saw Hitler for what he was.

Many passionately dedicated themselves to spreading the truth about the evils of Naziism.

Some of these were communists– the same type that got their guy to power in Soviet Russia. Great job guys…

Some were patriots. They just wanted to live a happy life and leave something for their children in the motherland. They probably died, likely turned in to the Gestapo by their own children for grumblings against the Nazis.

And some left. They didn’t care enough to defend the homeland, or elect a communist, or join the Nazis. They lived and thrived. They had children who had children. They wrote books, built businesses, passed ideas and wealth along to the next generations.

As I suggested in my last video, to join a cause is to fall into the Group Trap. You can have a larger affect, both personally and on the world, by taking matters into your own hands, and making small but meaningful changes that improve your life.

Moving to Puerto Rico was my vote for lower taxes– I take advantage of tax incentives and in return reward Puerto Rico for having good tax policies.

But the other thing I like about Puerto Rico is that the government is incompetent. Sure it might get annoying when they force me to go in person to get my driver’s license, or deal with other bureaucratic non-sense.

But it also means Puerto Rican residents aren’t going to be rounded up and placed in concentration camps. The police here are probably not going to solve a crime against you, but they also aren’t going to shoot you for no reason, or get-off on bullying you.

Puerto Ricans don’t rely on the government to help them, say, after a hurricane. They prepare ahead of time with extra food, and they buy a generator because of the unreliable power grid.

Sure you need more self reliance when it comes to an incompetent apathetic government. But you can be pretty sure that government won’t produce the next Hitler.

So who is the next Hitler? Just ask around, you’ll get plenty of answers, usually divided along (pretty convenient and suspect) political fault lines.

But the truth is, everyone has their counterpart on the other side, all passionately screaming to wake up the sheep because– you guessed it– they care.

Look, there is a lot that I care about. I’m not faulting anyone for caring. But in the past, I cared Hitler-style. I was so passionately caught up in what I knew to be right, that I just ended up contributing to the screaming match.

Passions flare, people get angry, and it creates dangerous zealots dedicated to their righteous cause.

The problems in society right now are not due to a lack of caring. Apathy is not causing the problems. People care.

They just care about different problems and haven’t figured out that the best way to solve them doesn’t involve forcing everyone else to bend to your demands.

So in a society of rival power factions fighting to force their way of life on the rest of the country, it makes more sense to check-out than to pick a side.

Instead of caring about this fight, lead by example, make the changes in your own life you want to see in the world— sorry, another cliche.

But that is the most effective way to manifest your vision of how the world should be. And it ensures you don’t do more harm than good.

Because if your first inclination is to force everyone else to care about what you care about, try having a little empathy. Maybe that’s not the issue for them. And maybe that doesn’t make them a punchable Nazi or Commie-scum or whatever.

Maybe it makes them just another human with unique wants and needs, who has had different experiences that put emphasis on different values.

If you’ve reached the point where you just don’t care anymore, I commend you. Because at least you know you’re not supporting the next Hitler.