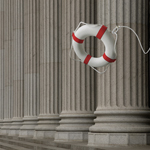 First thing’s first– I screwed up.

Yesterday I wrote to you about the US government’s initiative to loan money to small businesses, and I was wrong about an important detail.

I said the maximum amount of the loan was equal to 2.5x a company’s annual payroll expense. That’s incorrect.

The correct maximum loan amount is 2.5x a company’s average MONTHLY payroll expense over the past 12 months.

[The total amount that the government intends to shovel into the economy through this program– $350 billion– is still correct.]

So, apologies for the error… that’s what I get for reading legislation at 5am on Sunday.

A few readers alerted us to my oversight. And when I re-read the legislation to confirm my mistake, I couldn’t believe what I was seeing.

Honestly, a loan of 2.5x annual payroll made sense to me. It would give small businesses plenty of firepower to stay afloat for the long haul.

But this bailout is just 2 ½ months! That’s nothing. It implies that the government thinks everything will be back to normal by mid-June.

This is the “V-shaped recovery” theory– the idea that, while the economy has come to a screeching halt, it will come roaring back in a few months… and we’ll see an economic bonanza by the end of the year.

Most of the world certainly seems to buy into this belief, swinging from one extreme to another.

Not even ten days ago the general mood was abject terror, fear, and hysteria. Today we’re back to complacency and misguided optimism.

Stock markets worldwide have surged; the MSCI World Index (which tracks 1600+ large companies from 23 advanced economies) is up nearly 20% just in the last week, and the bear market is already over.

Governments are shoveling money into their economies, and central banks are printing trillions of dollars worth of currency… so the prevailing sentiment among investors is that companies will have a bad quarter or two, but everything will be back to normal within a few months.

Now, I need to caveat what I’m about to say by stating yet again that the world is not coming to an end. Rational, thinking people will always prevail, so please don’t take my comments as pessimistic.

Last week I wrote to you about a gentleman named James Stockdale– a US Navy pilot who spent more than seven years being tortured in a Vietnamese prison camp.

Years later when asked about how he cultivated the mental strength to survive such brutal conditions, Stockdale replied:

“You must never confuse faith that you will prevail in the end—which you can never afford to lose– with the discipline to confront the most brutal facts of your current reality, whatever they might be.”

As I explained last week, the facts of our current reality are absolutely brutal.

This virus has spread at a rate never before seen in modern history.

Reducing the contagion requires shutting down most of the global economy, resulting in a wide range of catastrophic consequences, including countless jobs lost, millions of businesses going under, and even entire nations going bankrupt.

Now, the uncomfortable reality is that many people who might die of Covid-19 would likely end up dying of some other pre-existing condition. But still– what politician wants the blood of a million people on his hands?

There are, of course, patches of good news. Infections in Italy have fallen. China is starting to carefully open up for business again after a nearly 3 month hiatus.

But in the United States it’s a different story.

Infections continue to grow exponentially. Two weeks ago there were only 4,596 confirmed cases in the US. Yesterday there were 163,844, an increase of more than 35x in two weeks.

At least some of that growth rate can be explained by the increase in testing; the more people get tested, the more positive cases will be confirmed and reported.

But regardless, it’s clear that the virus is still rapidly spreading… and that’s why I find all this optimism to be so incomprehensible.

The S&P 500 rose 17% over a period of three days last week. There seems to be zero consideration given to the possibility that the pandemic could become much worse. Or there could be a second or third wave of infections.

Or that the hospital system could become totally overwhelmed. Or that many of the businesses which have closed will NEVER re-open. Or that the unemployment rate could remain elevated for quite some time.

Or that the stimulus will fall far short of the mark. Or that the market will lose confidence in the central bank. Or that social unrest will take hold. Or that supply chains could be disrupted.

It’s clear that very few people have the discipline to confront the most brutal facts of our current reality.

There are literally thousands of potential risks and consequences from this pandemic. And they’re all being ignored.