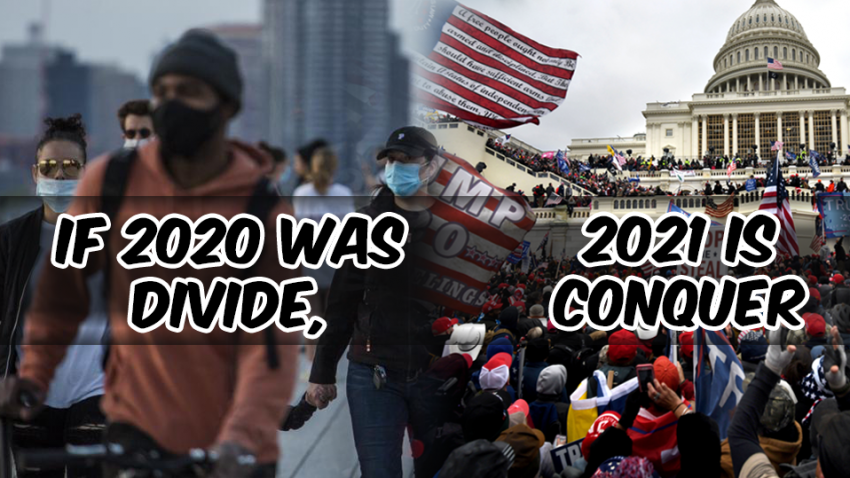 Earlier this year, a fitness magazine tweeted “It’s a great day to burn off those Christmas calories.”

It’s hard for me to think of a tweet LESS controversial. And yet, a psychologist led the woke mob, responding that the language was “hugely concerning and problematic,” because it casts exercise as a punishment, and not a normal part of everyday life. Other Twitter mobsters jumped on the bandwagon to call out the tweet.

This is where we are at. There is nothing you can say that a proper social justice warrior couldn’t twist to be offensive in one shape or form– a micro-aggression against one of many victim groups.

I don’t know about you, but that’s made me police what I say less. If I can’t win, why bother even trying? And that, in essence, is the solution– but I’ll get back to that.

Political correctness is nothing new. But it’s clearly been escalating in recent years.

For instance, we’re now supposed to believe that gender is a social construct, BUT you can get gender confirming surgery by altering your sex organs. So gender doesn’t correspond to sex, but by changing sex characteristics, you can confirm that your gender corresponds to your sexual appearance…

And when someone declares themselves the opposite gender, we are expected to pretend they have changed sex– a biological impossibility, since sex is denoted by X and Y chromosomes, which at this point in scientific development, cannot be changed.

It’s basically Orwellian double-think, where you are supposed to believe two contradictory “facts” at the same time. But just saying all this would make countless SJWs label me “transphobic,” as if I had some problem with the people themselves, as opposed to the psychological operation being run on the masses.

Which, by the way, the victims I am most concerned about are the young, vulnerable trans people convinced to make permanent body and life altering medical decisions– many who later come to regret it– egged on by people who don’t care the slightest about actually helping these people feel more comfortable in their own skin, and only care about pushing a social agenda.

You certainly can’t actually address any political issues in a rational conversation.

Militarized police have too much power, are not held accountable due to qualified immunity, the thin blue gang code of silence, and powerful police unions. Civil asset forfeiture is a complete violation of the Fourth Amendment.

ALSO, Black Lives Matter, the organization, is an admittedly Marxist front with motives far beyond police accountability. Raise your fist in solidarity, or you’re a white supremacist, right? Simple as that. You’re either with us or you’re against us.

One of the biggest things I value in the people around me is the ability to have a rational discussion despite disagreements. And I make sure to retain those friends and peers.

But it seems like the general public can barely have a conversation these days. We might be able to talk about the weather without arguing, maybe.

Except it would probably veer into a climate change debate, which yet again, cannot be addressed rationally. I care about the environment and think less pollution will obviously be a good thing. And yet, it would be insane to give governments and bureaucrats the power to destroy capitalism and enslave humanity to allegedly stop climate change.

And of course, the COVID dictators delivered the master-stroke in dividing society, testing mass compliance with illegal government mandates, making everyone suspicious of each-other, and providing a great excuse to rat out your neighbors to the Gestapo.

And also, it might make sense to protect grandma from the virus– not lock healthy people inside for a year. Imagine if all the effort and resources it took to shut down society went to protecting the most vulnerable, instead of oppressing young healthy people in an essentially 0% risk category.

That would have beat the virus and solved the problem. But it wouldn’t have given politicians the power they crave. To them, that would have been allowing a good crisis to go to waste.

We are told to cover our faces, which is dehumanizing and makes everything more difficult. People are harder to understand, it’s harder to communicate, and the depth of conversations break down.

Don’t talk to strangers, don’t meet new people, don’t mingle– those are all potentially infected disease carriers, do you want to die, or worse, asymptomatically spread the virus and kill your mother?! No? Swear off all social contact.

Are you one of those people who hesitates to inject a brand new vaccine with unknown long term consequences, and concerning side effects? We’ll label you an anti-vaxer, and anti-science. And no, you can’t talk about this rationally, it has to be an emotionally charged condemnation of the selfish people who don’t care if they murder their parents.

But the real kicker in all of this was how COVID-lockdowns have made us compartmentalize. The politicians have tried to convince us to shun the family, friends, and support groups we do get along with.

The amount of fear being spewed from the corporate media made families fight over who was invited to holiday parties, and who was the dirtiest among them, likely to spread COVID.

And, isolated targets are easier to take out.

That is where conquer comes in.

As a mob, storming the Capitol or burning down a police station feels safe. But the mob’s not there for you when you’re getting prosecuted. That’s the basic idea behind compartmentalization of society.

And they have divided people so well, that one side cheers when the other is finally conquered.

For example, some of the same people who wanted abolish the police last summer, enthusiastically support police breaking up parties and arresting the maskless in the name of COVID.

The big tech companies also moved to conquer this year. They apparently started to believe the propaganda that they were monopolies. So they arrogantly moved to conquer all those who haven’t adopted the correct opinions yet.

First it was the Trump supporters, Parler, and Facebook/ Twitter purges. And the left suddenly believed that private businesses have the right to refuse service.

Then the tech companies came for the Wall Street Bets crowd when they threatened to make the hedge funds lose money. Retail investors were shut down by Reddit, purged from Discord, and blocked from buying certain stocks on Robinhood.

But these tech companies moved to big, too early, and their attempt to conquer will have the opposite effect. It decentralized their targets, and scattered them across alternative social media and messaging apps. In many cases, apps that include encryption and that don’t harvest user data, at least to the same extent.

They gave people a great reason NOT to trust them, and hastened the need for alternatives. They pushed people to their competitors. I personally stopped using Google Docs, and started posting all my videos to Bitchute, LBRY, and Rumble.

And When it comes to the stock market, this is just a jolt for cryptocurrencies hosted on a decentralized blockchain– not so easily shut down by NASDAQ, Etrade, and Robinhood.

Of course they will continue to try to conquer, but you can take your power back by adopting alternatives to the big tech companies.

It might seem count-intuitive that spreading across apps and platforms could help avoid being conquered. After all, isn’t that a tactic of division?

But think of it instead as guerrilla warfare. It was easy to conquer a group who all used Facebook, or all use the US dollar, or all vote Republican. But how do you conquer when the enemy is everywhere and nowhere all at once?

Shut down a single app or platform, another springs up. Crash a cryptocurrency through market manipulation, there’s always another waiting to compete.

Therefore a solution is to be a leader in one of these decentralized nodes of opposition power to the establishment elites. You can build and maintain support networks of likeminded people. Likeminded in whatever way that means to you, because we are not all after the same thing. Give people a rallying point, or a gathering place for whatever your particular cause or interest is.

Keep the social interaction going. Start clubs. All the better if they teach and trade important skills.

Organize a group to drill together. Create a skill exchange where one person teaches pickling, and another foraging, or one teaches marketing, and another bookkeeping. Set up trade networks at the local level, and even emergency response for a safety net.

Now I realize you may not feel that you have enough likeminded people around you. So mix technological outreach with in person contact.

It may be hard work, but I bet you could build a group almost anywhere.

I have always been more interested in curating the type of people I am around.

And this gets me back to my, “stop caring” comment at the beginning, in response to the elites’ attempts to divide us.

I care less and less about watching what I say, because by telling the truth and speaking my mind, like-attracts-like. I am naturally calling together a group of people who have things in common, who get along, who are on the same page.

So if you hate the direction cancel-culture is going, the best thing you can do it ignore it entirely. This will naturally repulse the Social Justice Warriors, and attract people who think you are brave for saying some basic truths which have somehow become taboo.

I am going to articulate this idea better in an upcoming video about self selecting your friends, lovers, and audience– so make sure you subscribe and hit that bell so you’ll be notified.