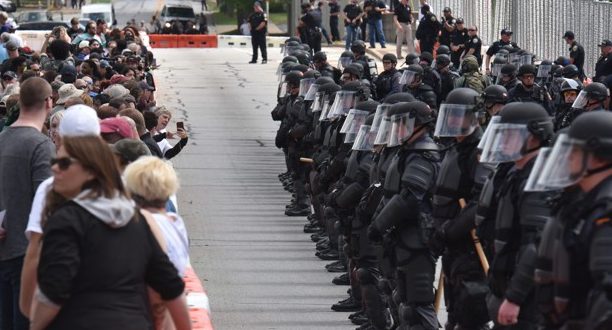 The law originally targetted the KKK. Now it has been used to arrest people protesting against white supremacists.

And that is why free speech is so important.

But as this 1951 law demonstrates, the law as it is intended is not always how it is applied.

Faced with hundreds of demonstrators rallying against a crowd of neo-Nazis in Newnan, local and state authorities turned to a little-known Georgia law adopted in 1951 to combat the Ku Klux Klan.

The law, which makes it illegal to wear a mask at most public events, was cited in several of the arrests of counterdemonstrators who joined a protest Saturday against white supremacists.

And the irony was not lost upon the organizers of the counterdemonstration, who were fuming Sunday that a law aimed at weakening white supremacists was used to arrest protesters who opposed a neo-Nazi rally.

There are so many problems with this law. Why are masks not protected forms of expression? What about hats, hoods, and sunglasses? At what point do those fit the definition of a mask?

Ironically, police routinely wear gas masks and face-covering riot helmets at these kinds of events. Apparently, the law doesn’t apply to them. But that is fitting since most laws don’t apply to the people who enforce them.

Have you ever threatened to shoot someone with a rifle because they had a mask on? Me neither. Police are a different breed.

A video posted on social media by freelance journalist Daniel Shular appeared to show authorities scuffling with counterdemonstrators. Authorities demanded that the counterprotesters remove their masks, and the footage showed an officer raising his rifle at demonstrators.

This is another good reminder that police will enforce any law handed down on high from politicians–even dead politicians who passed the law in 1951. The only actual violence at the rally was committed by police, in the name of the law.

But free speech, the very first amendment in the blueprint for this country’s government, is not so important to law enforcement. Police have no problem throwing people to the ground, handcuffing them, using pepper spray, billy clubs, and aiming deadly weapons at peaceful protesters because they wear a piece of cloth obscuring their faces.

And any other anti-free speech laws will be enforced with equal vigor.

Hate speech. Offensive displays. Fake news. Laws aimed at combatting these will absolutely limit free speech. Maybe, maybe, at first they will only be used against the neo-Nazis and the white supremacists, just like this anti-mask law was at first only used against the KKK.

But it is only a matter of time until innocent people find themselves in the crosshairs of these freedom crushing laws.

State law bans the wearing of masks, hoods or other devices that conceal a person’s identity if they’re on public property or on private property where the owner has not consented. It includes exceptions for holidays, theatrical productions, civil emergencies and sporting events.

The laws have been adopted by about a dozen states, most aimed at weakening the KKK in the middle of the 20th century. The Georgia Supreme Court in 1990 upheld the state’s ban after a Klansman donned a hood on the Lawrenceville Square, citing his First Amendment rights.

The law has mostly been used to target KKK demonstrations, though it has also been employed before to arrest demonstrators who are objecting to white power groups. At a 2016 rally, the law was used to arrest eight demonstrators protesting a white supremacist rally at Stone Mountain Park.

This is just one of many laws in the arsenal of the police state. There are enough laws that you can be arrested for basically anything. It gives an official appearance to entirely arbitrary policing. You can be arrested on any officer’s whim, and then he will be able to find an excuse.

Other counter-protesters were arrested for “resisting arrest,” a classic joke of a charge. How can you be charged with only resisting arrest? It means there was no reason for them to be arresting you, and only once they illegally tried to arrest you did you commit a crime.

If common law reigned supreme, where attacking someone is always wrong, these police would not have the protection of the state to shield their violent actions.

A blot of ink on a 70-year-old piece of paper would not protect these cops from charges that they threw people to the ground without provocation, that they chained and kidnapped people, that they aimed loaded guns at people who had done nothing aggressive or threatening.

Make no mistake, ANY anti-free speech law will be used against innocent, non-violent, peaceful people. And the American police state will enforce those laws on its victims with glee.