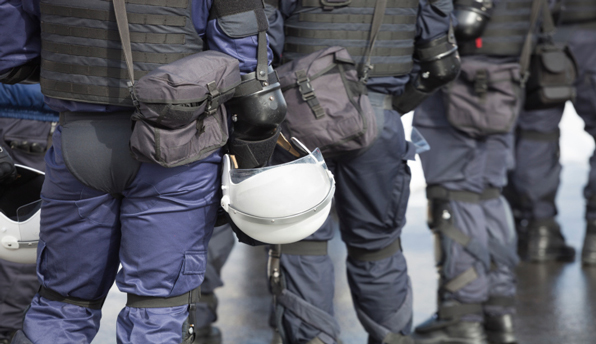 STAFF NEWS & ANALYSIS
Immigration Reform: Do They Fear a Reaction to What They Plan?
By Staff News & Analysis - July 07, 2014

Feds to Bring in Riot Squad Against Illegal Immigration … As illegal immigrants continue to spill across the U.S.-Mexico border, federal authorities are attempting to relocate the migrants from South Texas to housing facilities in states across the nation. One such facility is located in Murrieta, California, where a large group of protesters recently blocked a bus full of migrants from arriving. The protesters remain there, adamant that illegal immigrants don't get dumped in their town. But soon the concerned citizens may be forced to step down – Breitbart Texas has learned that federal agents plan to arrive in Murrieta on Monday with riot gear to ensure that another busload makes it to the housing facility. – Breitbart.com

Dominant Social Theme: Radical agitation is not civilized and won't be tolerated.

Free-Market Analysis: Dominant social themes having to do with civil unrest are piling up quickly now. This article above is a kind of elaboration on a theme, but no less troubling for that.

Previously, we covered the "neo-French Revolution" meme, in which the power elite seems to be seeking to create a kind of class warfare.

And in a number of articles we've covered the demonization of the Tea Party as well. The idea seems to be to marginalize free-market thinking in the mainstream media and even in some cases to criminalize it.

But the broadest meme of all, an emergent one, has to do with increasingly lawless fedgov actions combined with a deliberate perception that authorities recognize the lawlessness but are determined to move forward nonetheless.

We've covered this new trend in at least three recent articles, listed below. "The Brutalization of the West" is perhaps the most applicable to today's analysis because this is how civil society suffers – when those in charge make it clear that laws applying to everyone else don't apply to them.

The Brutalization of the West

One main point of the "The Brutalization of the West" is stated here:

The [immigration] crisis has been to a large degree manufactured. There are reports, mainly in the alternative media, that Latin Americans have been given to understand that if they can get into the US they may be able to stay.

According to a Breitbart news report, immigrants who cross over as incomplete family units are being processed for future court dates and then put on buses to cities of their choice around the US. These immigrants will then skip their court dates but will not be penalized for doing so. They will simply stay in the US and perhaps at some point may receive amnesty or formal documents allowing them to stay.

This is truly a lawless affair – and that is surely the most disturbing part of the exercise. A US president is no longer afraid to flout laws as he chooses and to justify his actions by claiming that it is the "right thing to do."

The US executive branch seems determined to do what it considers "right" even though it might easily be argued that its actions subvert established law. But what is "right" to one may well appear to be "wrong" to another.

Once law begins to be a matter of perception, with the most powerful establishing "right and wrong," then a bad precedent is being set. In fact, those in power are likely sending a significant message: We're doing as we please but you cannot.

Here's more from the Breitbart article:

Jeremy Oliver, a resident of Temecula, California – a town that neighbors Murrieta – told Breitbart Texas that local police officers warned the protesters that "it's going to get ugly." Oliver said, "The feds are pissed that they haven't been able to use this facility. Officers out there warned people that federal agents will be in Murrieta on Monday – they are going to get the next bus through no matter what. Riot gear and shields will be used to push the crowd back."

John Henry, a Murrieta resident since 1991, was told the same thing by local officers. "We're being told that federal Marshals or ICE will be here in the next few days and that they are bringing riot gear," Henry said. "They're apparently going to be blocking off the street with concrete blockades so that no vehicles can get through. The River County Sheriff's Department showed up last night and brought a huge watch tower that shoots up into the air 35 feet." On Friday, six protesters were arrested in Murrieta. One was apprehended for crossing "the yellow tape that blocked protesters from the Border Patrol station entrance," according to USA Today.

Henry expressed frustration at the fact that the illegal immigrants are being "rewarded" for breaking the law – after illegally crossing the border, they receive a slew of taxpayer subsidized benefits like housing, food, education, vocational training, and legal counsel. Most are then released onto U.S. soil. When U.S. citizens break the law, on the other hand, they pay the price. "If any one of us were to roll through a stop sign, we'd be pulled over and ticketed," Henry noted.

Watching these events, it occurs to us that the reasons that the US fedgov has been arming itself and its civilian police force so aggressively in the past few years has to do with the knowledge that continued provocations are going to be generated as a matter of policy.

The IRS scandal is one case in point. While it seems fairly obvious that forces in the government attempted to intimidate Tea Party constitutionalists and are now covering it up, the more important point is the arrogance with which IRS officials have defended their innocence and even the innocence of the larger institution.

The Cliven Bundy confrontation was surely another deliberate provocation, one that could have been avoided had officials not decided to make a show of force. Now according to news reports, further force of some sort is being contemplated that may force an additional confrontation.

One of the biggest examples of what might be considered a sociopolitical provocation is Obamacare. It is common knowledge now that despite the executive branch's assurances, an individual will not be able to "keep" his or her current medical insurance if they are satisfied with it.

Moreover, the rollout of Obamacare was so incompetent as to be contemptuous. Even now the US healthcare system remains in chaos and the Supreme Court's justification for the legality of the program rests on the dubious assertion that the funding is a "tax."

And now an immigration crisis … Here, the executive branch and elements of the legislative branch are obviously orchestrating a surge of "illegals" designed to create an immigration "emergency." The hope is, apparently, that enough chaos will be created to generate unstoppable momentum for reform.

Regardless of what anyone thinks of the above policies, the determination to implement them in a way that circumvents acknowledged legal structures must be seen as troubling.

It is a reason that Congress's approval rating has fallen to single digits, while approval of the Supreme Court and the executive branch has plummeted as well. One could well argue that the US government as currently constituted is facing a crisis of confidence, but the media on a day-to-day basis is not willing to portray the current events in this light.

Does Fedgov’s almost compulsive purchase of armaments have to do with the knowledge that further provocative programs are going to be implemented? Perhaps those in power are not afraid of people’s current perception of government. Perhaps they are afraid of the reaction to what they plan.