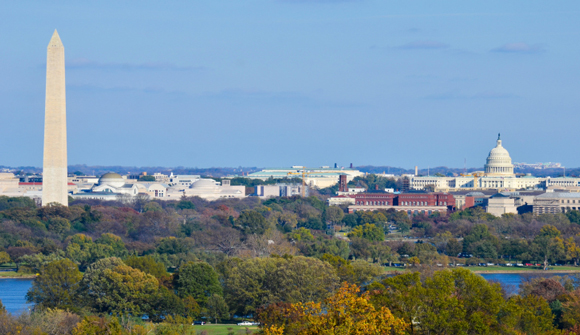 California Should Have an Embassy in Washington, Lawmaker Says … California Governor Jerry Brown said in his annual state-of-the-state speech yesterday, "We are leaders in renewable energy and efficiency; we have extended health care to millions; we are transforming our educational and criminal justice systems; we are building the nation's only high-speed rail system." – Bloomberg

Dominant Social Theme: This sounds like democracy at work.

Free-Market Analysis: California's officials are mulling this idea … and Florida has already done it. "Florida has had a similar office in a 124-year-old Victorian home on Capitol Hill since 1973," the article informs us.

The move is treated merely as another news item to report on. The idea that a state would choose to lobby the federal government in an organized fashion "on the ground" in DC is not seen as really unusual. California, we learn, runs an economy that makes it the seventh largest region in the world.

The state, in fact, will probably overtake Brazil as the seventh largest economy in the world … and there are more S&P 500 companies in California than any other state. If Brazil can have a Washington embassy, why not the West Coast behemoth?

The bill, introduced by Assembly Speaker pro Tem Nora Campos, a Democrat from San Jose, would allow California to partner with private nonprofit groups to establish and maintain an embassy within a one-mile radius of the U.S. Capitol. No state money would be spent on the facility.

The idea is that a "privately financed" location could provide a place to promote California and build a critical mass of pro-California tourists and "dignitaries." Yet perhaps there is another way to recognize and support California's size and industrial stature.

There are numerous secession movements in the US currently and the topic has been increasingly broached in various public formats. In California, a widely reported public discussion was sponsored some five years ago by Zocalo Public Square. The website posted coverage entitled, "Should California Be Its Own Country?"

California has a lot going for it. As New America Foundation senior fellow Joe Mathews explained, California boasts 17 of the top 30 American tech companies – including Google and Facebook – receives three times as many patents as the next most inventive state, hosts five of the country's top 10 universities by research funding, and is larger in size and population and economy than many of the world's countries. And by the latest estimate, California only gets about 80 cents for every dollar it pays in federal taxes.

So Mathews' greeting to the crowd at the Autry National Center seemed appropriate: "Welcome fellow secessionists." … He was joined by PoliPoint Press editor Peter Richardson, political consultant Darry A. Sragow, writer and blogger David Dayen, and Global California author Abraham Lowenthal to figure out whether California would be better off as its own country, and, short of seceding, how close Californians can get to independence.

The discussion concluded, however, that California wouldn't be better off seceding from the federal government. "It was Sragow put the question to the most practical test: 'I don't want to have to use a passport to get to Vegas.' "

This is often the sort of approach taken: One that is often more lighthearted than serious. Reuters approached the subject similarly in late 2014, surveying US citizens regarding secession on the occasion of the Scottish vote. But the results seem to have charged the effort with considerable gravity.

The article's tone is one of palpable astonishment, beginning with the title: "One in four Americans want their state to secede from the U.S., but why?"

For the past few weeks, as Scotland debated the wisdom of independence, Reuters has been asking Americans how they would feel about declaring independence today, not from the United Kingdom, but from the mother country they left England to create. The exact wording of the question was, "Do you support or oppose the idea of your state peacefully withdrawing from the United States of America and the federal government?"

It was hard to imagine many people would support secession. Forget the fact that the cautionary lesson of the Civil War is top of mind for many people as we commemorate its 150th anniversary; just in terms of dollars and cents, who in their right minds would give up all the money they've already paid into the Social Security and Medicare systems? Besides, most states get more back from the federal government than they put in.

Then the results came in … Any way you slice it, the data are startlingly clear: Almost a quarter (23.9 percent) of those surveyed said they were strongly or provisionally inclined to leave the United States, and take their states with them. Given the polling sample — about 9,000 people so far—the online survey's credibility interval (which is digital for "margin of error") was only 1.2 percentage points, so there is no question that that is what they said.

To give Reuters credit, the article provides the results factually. In what seems to have been an attempt to see if the responses were entirely accurate, Reuters actually did some follow-up calling.

Those we spoke to seemed to have answered as they did as a form of protest that was neither red nor blue but a polychromatic riot — against a recovery that has yet to produce jobs, against jobs that don't pay, against mistreatment of veterans, against war, against deficits, against hyper-partisanship, against political corruption, against illegal immigration, against the assault on marriage, against the assault on same-sex marriage, against government in the bedroom, against government in general — the president, Congress, the courts and both political parties.

The article characterizes the "aggrievement" as "comprehensive, bipartisan, somewhat incoherent, but deeply felt."

Again, to Reuters's credit, the article's conclusion didn't seek to minimize the findings, explaining that sentiments could evolve in a "dangerous" way given that (if one extrapolates) some 60 million are sincerely disturbed with their political status and the overarching supervision of the US federal government.

What such a poll tells us clearly is that Jerry Brown is on the wrong side of a national trend. The overarching sentiment of US citizens is toward devolution not toward more interaction with Fedgov or additional support of the federal system.

It is quite possible that the poll understates real sentiments regarding secession – were such a movement to take root nationally and to be seen as serious. The support for the current arrangement in the US – and probably in the EU as well – is shallow and easily disturbed. Further stress on the economic or sociopolitical situation would probably yield more discontent and even a willingness to act.

These trends are deeply laid and not easily redirected. Those aware of these trends will take human action – as we have often suggested – to secure themselves, their family and their property and investments in a prudent manner.