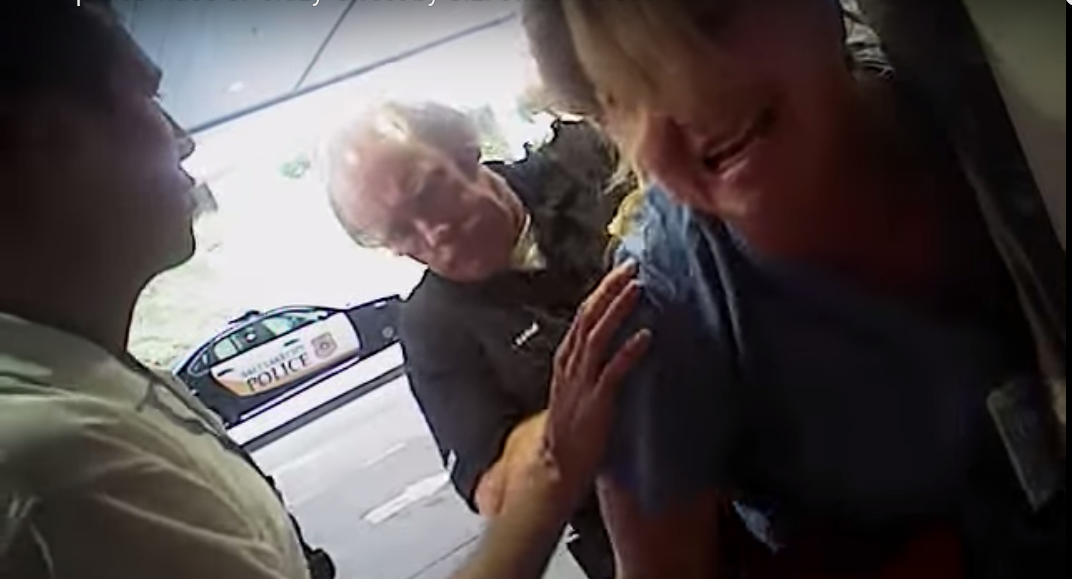 “Is this patient under arrest?” Alex Wubbles asks the officer, being instructed by legal counsel on the phone.

“Do you have an electronic warrant?” She asks, searching for a way to legally comply with the officers.

“No,” The officer admits bluntly, getting annoyed.

The nurse, Alex, printed out the hospital’s policy which the Salt Lake City Police Department agreed to. She showed it to the officers. She clearly and calmly listed the three things which would allow her to give the police the blood sample: a warrant, patient consent, or a patient under arrest.

The police had none of these things.

“Okay, so I take it, without those in place, I am not going to get blood?” The Officer Jeff Payne is heard saying behind his body cam.

The legal counsel on the phone tries to tell the officer not to blame the messenger, and that he is making a big mistake.

Then, the officer attacks the nurse, Alex Wubbles. He drags her outside, and handcuffs her, while she cries.

“What is going on?!” She says exasperated, wondering why they are doing this to her.

She couldn’t just break the hospital policy and put her job in jeopardy because some police officers illegally told her to. She couldn’t simply collude with the lawbreakers–the police–and illegally hand over a blood sample on behalf of an unconscious patient.

That would have opened her up to lawsuits and job loss.

The officers were, in fact, breaking the law. They had no legal right to demand blood from an unconscious patient who could not consent.

The man they wanted blood from was a truck driver who had struck a vehicle being pursued by the police. It is unclear why they would even need a blood sample from the victim.

But none of these legal facts stopped the police from placing the nurse under arrest.

Wubbles was handcuffed and placed in a police vehicle. She was never actually charged.

You could chalk this up to one crazy officer, Detective Jeff Payne with the Salt Lake City Police.

But then his supervisor showed up to the scene. While the nurse was handcuffed in the cruiser, the supervisor started to lecture her.

“There are civil remedies,” he said, telling her she should have broken the law when the officer told her to. Of course, this ignored the fact that she would have been caught up in the civil action against the officers!

It’s like an episode of the Twilight Zone as the Supervisor lies and says the nurse was obstructing justice. All the nurse wanted was a warrant signed by a judge, the legal requirement to execute a search! And yet not just Officer Payne, but his Supervisor insist that she should have given them what they wanted, without a warrant.

Listening to the Supervisor’s justification is a real trip. He repeatedly says, things like, “If you already have a sample, we can just go get a warrant, but all I’m hearing is no, no, no.”

What? Yes, go get a warrant! That is what you have been repeatedly told by the nurse and hospital staff!

You can tell from the video she is not some anti-cop crusader. She was legitimately trying to do her job and follow the law to the best of her ability. Before she is arrested, you can tell she is worried and uncomfortable, trying her best to keep the situation calm and professional.

And then the police handcuffed and dragged a crying nurse out of the building to intimidate and harass her further.

She is a strong woman. She stood up to their bullying and lies and did not give in. Despite the best efforts of the police, she would not help them violate the Fourth Amendment rights of her patient.

Police should not be able to just handcuff people and drag them to a car as an intimidation method. Payne should be fired and charged with assault.

The supervisor should also be fired, for continuing to harass that poor woman after learning quite clearly that his officer was attempting to break the law. These people are a threat to the public.

But all too often Police Chief’s and other officers line up behind their disreputable colleagues.

And that is why people have such a problem with the police. Fire the bad officers, and maybe the good ones can take the public spotlight.

But if the police treat nurses like this, surrounded by hospital staff, how can we expect them to treat the rest of us?

This is the Salt Lake City Police Facebook page if you would like to leave a friendly note.