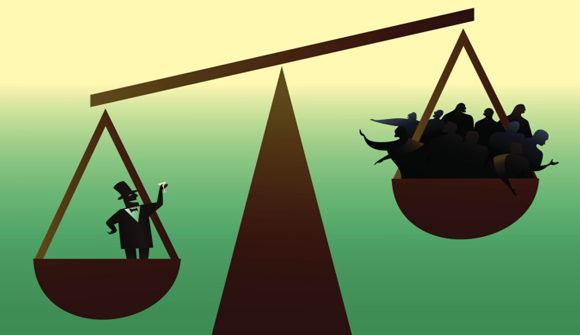 Nobel gurus fear globalization is going horribly wrong … An interconnected world was meant to reduce inequality – but that doesn't seem to be happening. David Ricardo's Theory of Comparative Advantage has broken down after 200 years, or so I learned at the Lindau forum of Nobel laureates in Bavaria. The theory published in 1817 has been a guiding principle of free trade, taken as a given by every student of economics in the modern era. It has served us well, but just as Newton's theories ran into limits and were overtaken by Einstein's relativity, comparative advantage no longer explains the world. – UK Telegraph

Dominant Social Theme: Capitalism is a failure, and Nobel laureates are sounding the alarm.

Free-Market Analysis: The big brains have figured out that capitalism is a failure. That's the gist of this UK Telegraph article. What's the solution? Enforced income equality, maybe even a universal living wage.

We've written about that here:

This is not just a meme, it's a kind of raging forest fire, a conflagration that is burning up the pages of the mainstream media – digital or not. And now its infection has spread to the pages of the UK Telegraph and more importantly, the issue of "income inequality" has become a sudden "cause célèbre" among "Nobel laureates."

Of course, these laureates didn't win a "real" Nobel prize, only one labeled in a certain manner to allow the faux-glamor of a "Nobel" to rub off on them. No matter, these are important names. And they are all "concerned."

Under Ricardo's model, inequality was supposed to narrow within countries as globalisation accelerated exponentially in the Nineties. Instead it is getting wider. The Gini coefficient measuring the spread between rich and poor is narrowing between countries, but is widening almost everywhere within countries, leading to a corrosive concentration of wealth.

"Globalisation today is very different from the 19th century," said Eric Maskin, winner of the Nobel Prize in 2007. Ricardo described a world where free trade in goods was opening up, but labour markets remained largely closed. This is no longer the case. Globalisation bids up the wages of high-skilled engineers or software analysts towards international levels wherever they live.

Prof Maskin – who happened to live in Einstein's old house in Princeton for 19 years – has developed a new model with Harvard's Michael Kremer that tackles the reality of international production, one where the Apple iPhone is designed in Palo Alto, but where Korea contributes $80.05 in components, Taiwan $20.75, the US $22.88, Germany $16.08, and China just $6.50 in final assembly (OECD study form 2010). (Note that this looks like a multi-billion trade deficit for the US against China. In reality it is trivial, showing how misleading trade data can be.)

"Ricardo's theory of comparative advantage is still valid, but it needs to be supplemented by new theories," he told me. That is a polite way of saying the assumptions no longer hold. Prof Maskin said it would be a counsel of despair to turn away from globalisation. The last quarter-century has led to a surge in living standards for the emerging world as a whole. Yet it must be tamed.

An answer lies in Brazil, one of the few countries to buck the trend and lower its Gini index. One of the tricks was a scheme introduced twelve years ago to make "conditional cash transfers" to poor families provided their children stay in school up to the age of 17, and must be vaccinated.

We mentioned portmanteau memes in a previous article, and the above paragraph is a good example of how elite dominant social themes are being mixed and merged – presumably with the idea that each one can reinforce the other. (Individually they are increasingly weak, but perhaps together they can be made stronger.)

But it is, in fact, the idea that traditional economic "rules" are being overturned by the modern environment that is the most offensive. The journo authoring this article must know full well that the distortive elements of society are generated principally by monopoly central banking. The argument is made, however, that Western societies – tortured into submission by central banking, corporate personhood and graduated income taxes – are somehow not properly conforming to free-market expectations.

The dishonesty of this kind of reporting is discouraging. How can one claim that this economic rule or that one has "broken down" without providing a larger frame of reference? At least that would be the intellectually honest thing to do.

Instead, the article plunges on as if oblivious to its illogic. Sir James Mirrlees is quoted, for instance. We learn that he won the Prize in 1996 for work on incentives, advocates outright subsidies for poorer workers in the West to stop them "falling out of the bottom." Mirlees's perspective: "Just as you have social security taxes on employment, you could have negative taxes. Housing subsidies already work in this way in the UK."

Prof Mirrlees says capital controls may be needed to right the ship, warning Europe could be trapped in high unemployment for "years to come", unless they keep their capital at home for their own use. "The Europeans don't yet seem to have realised this," he said.

Why not get rid of distortive economic mechanisms instead of creating further command-and-control economic facilities? Western economies are crippled, but instead of alleviating injuries, the economists mentioned in this article merely prescribe more palliatives.

Compare the economy to a wounded lion – one that has a thorn in its paw. Instead of pulling the thorn, these big brains are suggesting that the lion learn to use crutches. Here's the conclusion:

There is an enduring myth – a self-serving one – that inequality is a price we must pay to achieve higher growth. Advocates posit a trade-off effect. They argue that "levelling" pulls down everybody and damages the economy in the end.

Prof Joseph Stiglitz says the data proves otherwise. "We now realise that less inequality leads to greater stability, growth, and economic efficiency. They compliment each other," he told the Lindau forum. "We are seeing an ever-increasing concentration of wealth. It is fundamentally different from what occurred in the 19th century and up to the First World War, when real wages were rising. What we have seen with globalisation since the Eighties is stagnation in real wages," he said.

For Stiglitz, a ferocious supporter of globalization, every problem looks like a nail; every solution is to be the internationalist hammer. Inequality is NOT a price that need be paid for "higher growth." It is only a "price" because monopoly central banking concentrates wealth into fewer and fewer hands. As for "less inequality leading to greater stability" – that's a kind of economic non-sequitur. Who wants the "stability" of an authoritarian society?

This article is pounding the meme once more of "income inequality." We've documented about six articles on the subject in the mainstream media in the past few months. The idea seems to be to build the case against "inequality" by making it into an intellectual proposition. This is why "highbrow" mainstream publications are being employed. And now "Nobel" prize winners.

Occupy Wall Street fizzled. So now another gambit: Once the case is made at the highest levels of academic polity, politicians can begin to act on the arguments. Anti-income inequality legislation can be drafted and implemented. One way or another the power elite seem intent on radically expanding the welfare state.

Opportunities are increasingly stifled, but everyone will be entitled to a "living wage" – whatever that is.