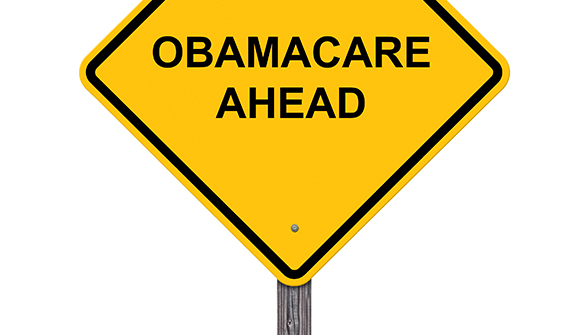 Delaying the Employer Mandate Requires Delaying All of Obamacare … The IRS has announced it will postpone the start date of Obamacare's "employer mandate" from 2014 to 2015. Most of the reaction has focused on how this move is an implicit acknowledgement that Obamacare is harmful, cannot work, and will prove a liability for Democrats going into the November 2014 elections. The Washington Post called the decision a "fresh setback" and a "significant interruption" to the law's implementation. John McDonough, a prominent supporter of the law, observes, "You've given the employer community a sense of confidence that maybe they can kill this. If I were an employer, I would smell blood in the water." – Cato

Dominant Social Theme: This is not an efficient way of doing business, but we do what we must.

Free-Market Analysis: Western law is a plaything in the hands of the powerful. The libertarian think tank Cato makes this point powerfully, above. Here's more:

The IRS's unilateral decision to delay the employer mandate is the latest indication that we do not live under a Rule of Law, but under a Rule of Rulers who write and rewrite laws at whim, without legitimate authority, and otherwise compel behavior to suit their ends.

Congress gave neither the IRS nor the president any authority to delay the imposition of the Patient Protection and Affordable Care Act's employer mandate. In the section of the law creating that mandate, Congress included several provisions indicating the mandate will take effect in 2014.

In case those provisions were not clear enough, Section 4980H further clarifies: (d) EFFECTIVE DATE.—The amendments made by this section shall apply to months beginning after December 31, 2013. It is hard to see how the will of the people's elected representatives – including President Obama, who signed that effective date into law – could have been expressed more clearly, or how it could be clearer that the IRS has no legitimate power to delay the mandate.

Again, Ezra Klein: "This is a regulatory end-run of the legislative process. The law says the mandate goes into effect in 2014, but the administration has decided to give it until 2015 by simply refusing to enforce the penalties." This matters because the Obama administration has abused nearly every power it possesses–and asserted powers it clearly does not possess–to protect Obamacare.

… As it became clear that dozens of states would refuse to implement Obamacare's health insurance "exchanges," the IRS announced it would implement the law's tax credits, subsidies, and taxes in states with federal fallback exchanges – even though Obamacare clearly, repeatedly, consistently, and intentionally prohibits the IRS from doing so.

The IRS has literally asserted the authority to tax, borrow, and spend more than $1 trillion contrary to the express will of Congress. Despite the Supreme Court's ruling that the federal government cannot coerce states into implementing Obamacare's Medicaid expansion, the Obama administration continues to coerce states into implementing most of the expansion's provisions.

Let us make two other points.

First, laws should apply to everyone. Congress, for instance, routinely exempts itself from laws applicable to others. When the legislative body constantly exempts itself from obeying the Law of the Land (no matter how irrational it might be) then lawlessness and corruption have reached the highest levels of society.

Second, a legislative body (or law enforcement agency) shouldn't single out certain individuals or groups with specific lawmaking. From what we can tell, this is happening more and more. Even the targeting of Edward Snowden seems representative of this sort of activity – where US officials seem to be "making it up" as they go.

These are the kinds of abuses that happened long ago in Rome – perhaps the empire most like the US despite the age difference – and eventually Rome collapsed.

We are told that barbarians over-ran Rome. But the reason they did so was because Roman citizens had lost the will to defend their civilization. It was so abusive and corrupt that those who were part of it had no desire to continue under it.

The Cato article also explains that by exempting some targets from Obamacare but not others, the costs for some are being driven up to prohibitively high levels.

Congress and the Obama administration should stop perverting the law generally by making it applicable to some but not others. Eventually what happened in Rome will surely happen in the US if this continues. People, seeing evident and obvious injustices, will withdraw the "consent of the governed."

This is not an abstract or theoretical observation, but one grounded sadly in history. The mishandling of "Obamacare" is unfortunately symptomatic of a much larger sickness.