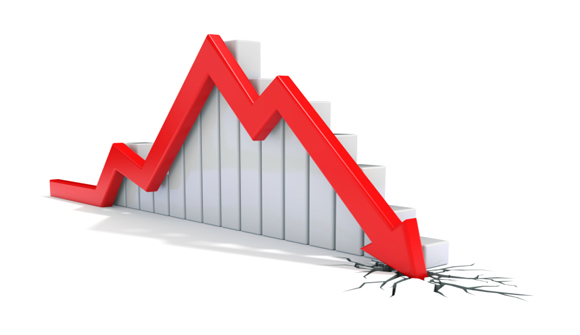 It’s not enough to hand over your money to the government anymore.

Now you have to pay them for the privilege to do so.

That’s the basic premise behind negative interest rates: investors around the world are crazy enough to buy government bonds whose yields are actually below zero.

In technical terms, this GUARANTEES that anyone who holds the bonds to maturity will lose money. It’s genius!

What’s truly remarkable is that the issuance of negative-yielding bonds is actually on the RISE once again.

From October through the end of January, the amount of negative yielding bonds in the world rose by 21% according to data from Bank of America Merrill Lynch.

This is one of the many, many consequences of central banks keeping interest rates at historic lows for so long. They’ve destroyed the financial system to the point that almost nothing makes sense anymore.

Think about it– if you hold money in your bank account, you stand to earn a whopping 0.02%. Even with a “high-yield” savings account, you’re lucky to earn half a percent.

This means that, when you adjust for inflation and taxes, the value of your savings is guaranteed to decline.

That’s one of the reasons investors are chasing any asset they can find that pays any yield whatsoever.

I’m the controlling stakeholder in a group that recently sold a large commercial property for about $25 million. That was MUCH more than we had paid for the property only two years before.

But what really struck me was, based on the property’s income relative to the price the new buyers were paying, they are only going to earn an annual yield of about 3%.

And that wasn’t a fluke either. The investment banker we hired to market and sell the property brought us more than a dozen offers in the same price range.

So there was practically a stampede of sophisticated investors willing to accept a measly 3% annual yield.

Though when you’ve been abused with negative interest rates for so long, I suppose 3% seems luxurious by comparison.

This is one area where small investors have a MAJOR advantage.

Large institutions, banks, hedge funds, etc. have hundreds of billions of dollars to manage. And for them, they don’t have very limited choices. There are very few asset classes in the world capable of absorbing large capital flows, i.e. billions of dollars at a time.

But smaller investors are dealing with tens of thousands, hundreds of thousands, or even a few million buck. Those are MUCH easier numbers to manage and open up an entirely different universe of options.

We made a multi-million-dollar loan secured by a European estate worth many multiples the loan amount. If the borrowers default, we immediately get ownership of the property (without lawyers getting involved)… and we’re earning a 12% annual yield on our money.

You’ve probably heard me mention other asset-backed loans before; we’ve loaned over $30 millon over the past few years through a peer-to-peer program where the loans are backed at a three-to-one margin by fine wine that’s held by an independent, third party custodian.

We’ve also made loans backed by gold and silver bullion at a 2:1 margin which have paid up to 6% interest. And with those loans, the collateral is also held by an independent, third-party custodian.

I’m always seeking out these types of deals; any time I can generate solid returns with minimal risk where I can take legal, physical, or administrative custody of a valuable, marketable asset that’s worth multiples of my investment, I’m interested.

Like me, Tim recognizes that global financial markets and major economies around the world are due for a major correction. So he plays it safe looking around the world for deeply undervalued investments.

Merger arbitrage is an excellent strategy to make solid gains in a short period of time – without exposing yourself to general market risks.

Here’s how it works…

After the announcement, shares of company Y will rise to, say $9. It doesn’t trade up to the full $10 purchase price because there’s always a chance that the deal falls apart.

The merger arbitrage strategy is to buy shares of company Y at $9… then wait a few months for the deal to close at which point we’ll be paid $10 for our shares– a return of about 11% in 2-3 months.

It sounds simple in theory. But it’s actually quite difficult to find the deals with the highest likelihood of closing.

But Tim has 18-years’ experience in the space. And he’s amassed a stellar track record over the years following this strategy… 77% of his merger arb trades have been profitable (with an annualized return of 42.6%).

2018 was a record year for takeovers. And the pace this year is just as frenzied (including the major deal we discussed yesterday)…

Tim has a new takeover trade he’s recommending in his latest 4th Pillar, which comes out March 1.

While merger arb will be a big focus for 2019, that’s not the only opportunity Tim is excited about right now.