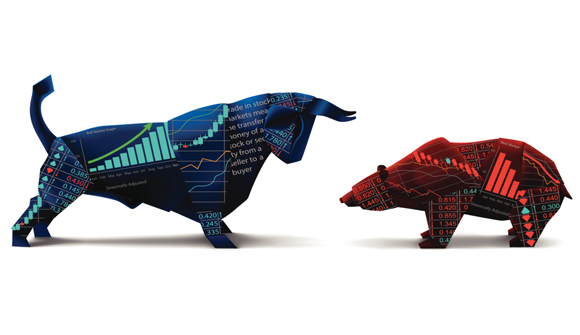 Dominant Social Theme: Things will go on. They always do.

Free-Market Analysis: In this analysis we'll cover a predictable stock market meme and then provide an alternative media examination that makes more sense to us.

We'll draw a conclusion from it – a famous one.

Begin, however, with this CNN article. What could be more predictable in the mainstream media than another report explaining that doom and gloom are greatly exaggerated and that the system is a good deal more resilient than it seems?

The S&P 500 is down over 2% so far this year, putting it on track for its worst year since the 2008 financial crisis. "We think this cyclical bull market has more room to run and expect a good (but not great) return for the stock market in 2016," wrote Scott Wren, senior equity strategist at the Wells Fargo Investment Institute

Great job growth? We don't believe federal economic numbers when it comes to employment, wages or inflation. But nonetheless, statistics provide a foundation for this … meme.

And to be fair, the article does provide some negatives including China's instability and equity drawdown. Investors are watching China "nervously" for signs that its lagging equity market will have an impact on the larger economy.

Yellen's decision to hike may prove problematic as well, or at least it may inject considerable market volatility into the 2016 market. However, optimists are advising that such volatility will allow investors to "buy on the dips."

But let's examine an analysis with a bit more substance, from our point of view. The article in question was posted at LewRockwell.com and is entitled, "The Big Short's Michael Burry on the Crash."

What Does Michael Burry Say About Today's Economy and Investment Scene? … Michael Burry was the hero of Michael Lewis's book The Big Short, about the Crash of 2008, and also the hero of the popular film of the same name.

Burry is a hedge fund investor (Scion Asset Management) who normally keeps a low profile. Lewis is perhaps the most readable writer on Wall Street today. His articles and books are always hard to put down, partly because he finds either very colorful figures or thoughtful, interesting, and little-known figures such as Burry and builds his story around them.

New York Magazine had the good idea to interview Burry for an update of his views and fortunately he agreed to respond by email. The resulting article, entitled "Michael Burry, Real Life Market Genius From The Big Short Thinks Another Financial Crisis is Looming," appeared on December 28.

The Burry article does us the favor of summarizing his observations. It explains that a central point of Burry's insights is that the crash and subsequent Great Recession didn't fundamentally change the texture of Western culture. Finger pointing continued and people refused to take personal responsibility. This disappoints him.

Other points? The banking sector, including the Federal Reserve, has gained even more power in the past half-decade. The Dodd-Frank reform legislation has done little or nothing to restructure investing or make another crash less likely.

Wall Street's use of "free" money – printed obligingly by the Federal Reserve – benefited the biggest investors while the middle class paid. This is part of a larger problem that has to do with the Fed's corrosive price fixing of the volume and value of currency. "Government is creating the very economic inequality it claims to deplore," Burry explains.

Finally, we learn what is perhaps the most important, that "risk cannot be priced without market interest rates, so the economy is floundering without reliable road markers." Another way to say this is that a valid money price cannot be established without the competition that monopoly central banks consistently deny to the market.

These are much more cogent points, in our view, than the ones CNN makes – simply because they are far broader. To confine oneself to a market analysis in this day and age strikes us as facile.

There are so many deeply embedded problems in the current economic environment that whether the market goes up and down is probably of secondary importance to many savers, especially those that have a broadly diversified portfolio.

Ultimately, this is probably the best approach given current tumultuous times. There are epochs when the business cycle provides us with clues that can lead to overweighting but this probably is not one of them.

The prudent investors will likely include a variety of asset classes in his or her portfolio – including precious metals, real estate, perhaps pre-market equity, second homes and a good deal of cash, preferably not all of it in a bank.

One should also bear in mind that the current sociopolitical environment is not much more stable than the economic one. In such times, one should pay close attention to Will Rogers's singular insight, "I'm not as concerned about the return on my money as I am the return of my money."