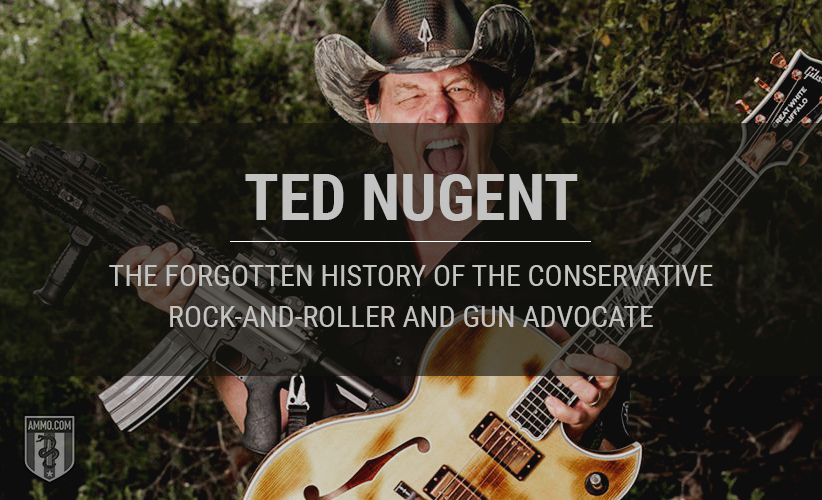 “I’m the gun guy, a loud guitar Dirty Harry with a ponytail.”

The list of conservative rock-and-rollers is pretty short. But even if you were only going to have just one, Ted Nugent would do the trick.

The Nuge. Uncle Ted. Great Gonzo. The Motor City Madman. He goes by many names, but he was born with the unassuming moniker Theodore Anthony Nugent in 1948, the third of four kids in Redford, MI. Part of a military family, Nugent’s father was a career sergeant in the army. For his part, though, Nugent was of draft age during the Vietnam War, he flunked his physical and was declared unfit for military service. Today, however, he is a member of the U.S. Marshals Fugitive Felony Task Force.

Nugent began his rock-and-roll career with the Amboy Dukes, one of the premiere psychedelic rock bands of the era. They replaced the equally legendary Shadows of Knight as the house band at The Cellar, a teen rock club in the Chicago suburb of Arlington Heights, IL. Their breakout hit was “Journey to the Center of the Mind,” a song that is clearly about LSD use – but not to Uncle Ted, who is one of the most notoriously sober rockers in history. In fact, he was cited by Minor Threat’s Ian MacKaye, and others of the early hardcore scene, as one of the biggest inspirations for the straight-edge movement.

Indeed, The Nuge claims and proudly owns his role as the inspiration for this movement. In a VICE interview he said that he will work with anyone who is anywhere on the political spectrum (citing Rage Against the Machine’s Tom Morello as both a friend and a collaborator), but that he’s reticent to work with anyone who does drugs of any kind because he believes that it robs them of focus.

The Making of a Rock-and-Roll Outlaw

The Amboy Dukes slowly transformed from a band into Nugent’s solo project. After a series of personnel changes, they became known as Ted Nugent and the Amboy Dukes, with “the Amboy Dukes” eventually dropped. (The Dukes made their first appearance in 30 years at the 2009 Detroit Music Awards.)

Ted Nugent is noteworthy in rock history for a number of reasons, not least of all being a solo act who isn’t a singer. While he did eventually take over vocal duties, this came much later. During his classic period (Ted Nugent, Free For All and Cat Scratch Fever), vocals were handled by Derek St. Holmes. In 1989, he formed his next supergroup (whose second album was called Don’t Tread, presumably at Nugent’s suggestion) with former members of Night Ranger and Styx.

Of course, all of this is really cool, but it has almost nothing to do with why Ted Nugent is an “unsung hero.” Ted Nugent is not just a conservative, but an outspoken conservative, Second Amendment advocate and conservationist. To that end, he has supported President Trump and Sheriff Joe Arapaio. He is also a board member for the National Rifle Association.

He defended fellow Michigander Kid Rock after Rock was criticized for bagging a mountain lion. Nugent has come under criticism for his own wildlife preserve, Sunrize Acres, being “canned hunting.” It is 340 acres.

He attended the 2013 State of the Union Address as the guest of U.S. Representative Steve Stockman (R-TX).

Nugent has – in his own words – “threatened” to run for public office several times, but has yet to (pun intended) pull the trigger. He talked about running for governor of Michigan in 2006 and 2010, but ultimately decided not to do it. The Illinois Republican Party considered him as a candidate for Senate in 2004, due to his roots in the state.

Imagineer Magazine asked him what his policy solutions were in 2010, and he gave a very direct answer, characteristic of Great Gonzo: “Slash the living hell out of the waste and corruption and the outrageous army of do-nothing bureaucrats. I would fire every government worker whose job I would deem to be redundant and wasteful. No able-bodied human being would ever get a handout again.”

He also spoke about running for president as a Republican in 2016, but this never came to fruition, presumably because another celebrity politician took center stage.

Ted Nugent is known for making a lot of outrageous statements that, unlike most “outrageous” statements reported on by the media, tend to be 100-percent true and totally in context. They call him “the Motor City Madman” for a reason. But it’s this intense energy that makes Uncle Ted who he is. He has frequently said that every gig he plays is the most important one of his life. Anyone who has seen him live knows this isn’t hyperbole.

For anyone curious, Uncle Ted recommends a .22 bolt action for your first weapon. When a man who is one of the greatest guitar players in the history of rock and roll, who claims that he could survive “forever… bare naked” in the woods, recommends a weapon, you pay attention. And while we might not stand behind every last word The Nuge utters, it’s hard to come out against someone who does such a good job at irritating liberals and gun grabbers.

Ted Nugent, the American musician and gun enthusiast, swears by the 10mm. He even had a hand in creating a custom Glock G40 10mm called the NUGE/TMT Tactical. Along with much customization, the NUGE G40 features a machined American flag on the slide, Ted Nugent’s stick man logo, and his signature. The firearm comes with a matching case, and only 100 were manufactured.

Nugent has also lent his name to a co-branded line of high-performance hunting ammunition from Pierce Ammunition. That venture is now defunct, however, Pierce planned to manufacture “Ted Nugent Ammunition” in .357 magnum, 10mm, 44 magnum, 9mm and 45 Long Colt as well as various hunting rifle ammunition from the .223, 308, 30-30, 243, 30-06, 270, 300 Win Mag and the 50 cal. BMG according to the company’s press release. In response, Nugent noted that “It was psychobabbler Abraham Maslow who wrote of the phenomena of self-actualization. What Maslow failed to grasp is that reaching true self-actualization can only be ultimately achieved when you have your own brand of ammunition.”

Ted Nugent is one of those “only in America” stories like many other right-wing rockers (Elvis Presley, Gene Simmons and Johnny Ramone are just some of the more obvious and awesome examples). The EU and the UK would have thrown him in jail for speaking his mind ages ago, but here in America he’s continued to exercise his freedom of speech despite being excluded by the media elites: “I’m not in the leftist-controlled Rock & Roll Hall of Fame because of my political views, primarily my lifelong militant support of the NRA, the Second Amendment and my belief that the only good bad guy is a dead bad guy.”

If you’re new to the work of Ted Nugent, we might recommend Weekend Warriors. It’s not necessarily his best work, but it’s far from his worst and it features him wielding a machine gun shaped like a guitar. Give it a spin the next time you have some friends over for plinking. Uncle Ted will definitely approve.

Ted Nugent: The Forgotten History of the Conservative Rock-and-Roller and Gun Advocate originally appeared in the Resistance Library at Ammo.com.