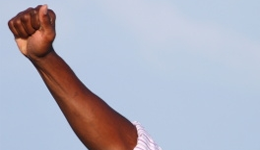 Economic focus should shift from the BRICs to Africa's emerging markets … Just as the green shoots of recovery are appearing in the UK, and positively sprouting upwards in the US, so it seems that the so-called BRIC economies – Brazil, Russia, India and China – are slowing. 'The BRICs really matter. They now account for one quarter of global GDP and, since 2005, they have produced nearly two fifths of global growth.' Just as the BRICs have slowed, so other emerging markets have started to improve. I reckon that the two countries with the most exciting prospects over the next 10 years are African – Ghana and Nigeria – with several other African countries not far behind. In the end this is far more important for the relief of poverty and the shape of the world than whether the BRICs grow at slower rates in the years ahead. – UK Telegraph

Free-Market Analysis: For several months now we've presented analyses of articles in such papers as The Economist about "Africa Rising." The meme is all over the Internet. This is how these promotions build, as those who run the money business select targets and make their promotions a self-fulfilling prophecy.

The so-called BRIC promotion began a decade ago when a Goldman Sachs banker labeled Brazil, Russia, India and China the "BRICs." South Africa was included, too, for some reason. But over the years, the BRICs have generally made extraordinary progress.

Was this simply good forecasting? Perhaps. But one has to keep in mind that large Wall Street firms working in concert with other centers of influence such as central banks can literally turn prophecy into reality.

We would argue the same sort of transformation will happen in Africa, given the amount of attention now being paid to the "dark continent." At the same time, we see a diminishing growth rate among the BRICs, which this article is pointing out. Those who are more conspiratorially minded will wonder if all this is not a kind of self-fulfilling prophecy.

Perhaps the idea is to build up the BRICs, much as China and Japan were built up – and then let the growth rate lag as attention turns to Africa.

The BRICs really matter. They now account for one quarter of global GDP and, since 2005, they have produced nearly two fifths of global growth. So their recent slowdown has surprised many people.

The explanations for how the four countries have got to the present situation are different but, with regard to how they get out of this mess and regain their vigour, they share something in common. They all require major structural economic reform.

China needs to become more like Brazil with its consumption-led growth; Brazil and Russia need to become more like China and raise investment rates and India needs to break out from its over-regulation and invest more in infrastructure. But in all four cases, vested interests are likely to prevent a radical shift in policy.

This does not mean, though, that we should write off the emerging markets boom overall. Far from it.

Yes, the international investment boom is not over because Africa is being groomed as a substitute. These are not merely innocent observations. There are tacit, concrete steps being taken to make speculation into reality.

An African central bank is being constructed and a pan-African union is being strengthened. Additionally, the West is focusing on certain African countries that may benefit from a boom.

These, as we have identified, include South Africa, The Ivory Coast and Kenya. This article adds two more: Ghana and Nigeria.

One can see this meme being constructed. Whether it will come to fruition successfully is an open question. But there is no doubt that it is receiving a good deal of promotion.