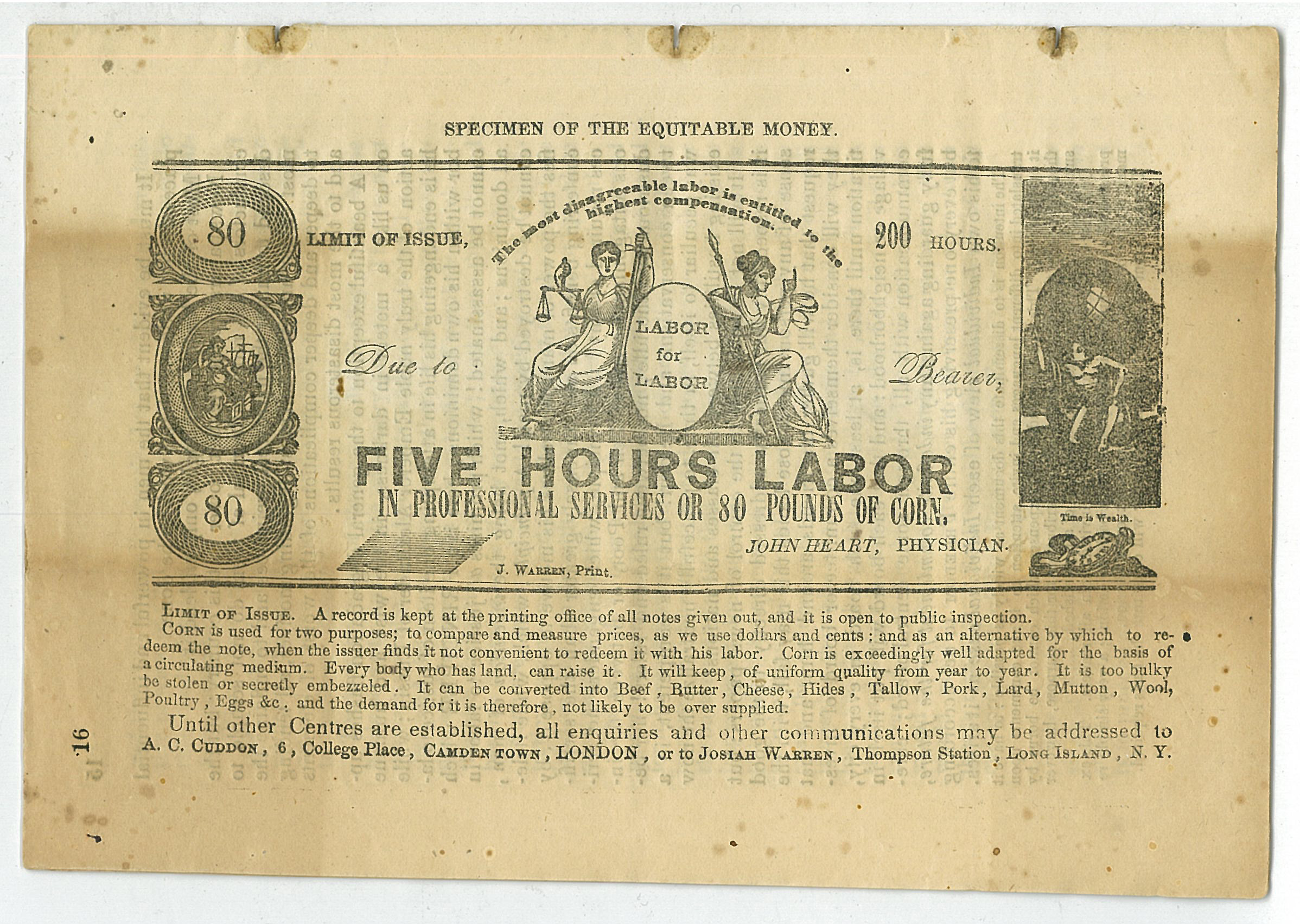 STAFF NEWS & ANALYSIS
The Alternative Currency of a 19th Century Abolitionist
By Joe Jarvis - May 09, 2017

Have you ever had the dream of starting your own society? What about introducing a new currency? Turns out Bitcoin was far from the first private currency.

Josiah Warren didn’t like the political system, and he didn’t like the economic system, so he started his own little alternative community, with a unique medium of exchange. Warren actually started multiple “anarchist” micro-societies, with varying levels of success. Although he never called himself an anarchist, he believed in individual freedom to the point that he argued government was inherently a violation of rights.

Warren said that when laying out laws and constitutions, governments always present the problem of interpretation. The power of the interpreter of laws becomes unlimited power. Because of this, attempts to fit everyone under one unified umbrella of law and order will inevitably cause schism, disappointment, and resentment.

To be harmonious and successful we must begin anew; we must disconnect, disunite ourselves from all institutions or rise above them.

But how, you ask, can this be, where each is a member of the body politic–where obedience to some law or other is indispensable to the working of the political machine? If every one was the law unto himself, all would be perfect anarchy and confusion. No doubt of this. The error lies further back then you have contemplated. We should be no such thing as a body politic. Each man and woman must be an individual, no member of any body but that of the human family. Blackstone says, “It is the wants and the fears of the individuals which make them come together,” and form society.

In other words, it is for interchange of mutual assistance, and for security of person or property, that society is originally formed. Now if neither of these objects has ever been attained in society, we have no reason for keeping up a body politic…

With regard to security, we see that in the wide range of the world’s bloody history, there is not any one horrid feature so frightful, so appalling as the recklessness, the cold-blooded indifference with which laws and governments have sacrificed person or property in their wanton, their criminal, or ignorant pursuit of some blind passage or unsubstantial phantom of the imagination.

Governments have failed in their expressed purpose, so why bother preserving that failure? After all, people will voluntarily come together when they need mutual assistance, which is supposedly the entire point of government anyway.

Before the Civil War, many prominent abolitionists were basically total anarchists, because they saw the injustice perpetrated by the government on the black slaves.

Frederick Douglass spoke about slavery in a way that is impossible not to draw parallels between government citizens and slaves.

To make a contented slave, you must make a thoughtless one. It is necessary to darken his moral and mental vision, and, as far as possible, to annihilate his power of reason. He must be able to detect no inconsistencies in slavery. The man that takes his earnings, must be able to convince him that he has a perfect right to do so. It must not depend upon mere force; the slave must know no Higher Law than his master’s will.

And many people do repeat like sheep, “Because it’s the law!” without ever analyzing whether such laws are just and moral. Henry David Thoreau argued that the moral thing to do is break unjust laws and make an effort to pay as little taxes as possible, lest one be a party to injustice.

If the injustice is part of the necessary friction of government, let it go, let it go; perchance it will wear smooth,-certainly the machine will wear out… but if it is of such a nature that it requires you to be the agent of injustice to another, then, I say break the law. Let your life be a counter-friction to stop the machine. What I have to do is see, at any rate, that I do not lend myself to the wrong which I condemn.

Lysander Spooner, another 19th-century anarchist, perfectly summed up the blaring inconsistency of government policy just after the Civil War:

There was no difference of principle—but only of degree—between the slavery they boast they have abolished, and the slavery they were fighting to preserve; for all restraints upon men’s natural liberty, not necessary for the simple maintenance of justice, are of the nature of slavery, and differ from each other only in degree.

Lysander Spooner actually started a service to deliver mail to compete with the U.S. Postal Service.

Likewise, Josiah Warren was not simply satisfied with criticizing the government; he invented ways to compete with the government. One of his ideas was an attempt to wrest the control of money away from government power. His ideas for currency were aligned with the value of labor.

In 1827 Warren introduced his own currency called a labor note, linked to a “Time Store” he set up. The idea behind the time store was that one should charge an amount for goods based on their labor in bringing the goods to market, versus supply and demand.

Clearly, this only really works for goods in sufficient supply. He bought flour, for instance, and charged customers the price he paid, plus a fee for the amount of time it took him to purchase the flour, store it, and bag it to sell to the customer. In turn, the customer would agree to trade their labor for the same amount of hours or minutes. So if the total cost for Warren to supply them with a pound of flour was ten cents and an hour, then the customer owed Warren ten cents and an hour of, say, sewing or wood splitting.

It was a slightly more advanced form of barter. But in a sense, it was also too simplistic. Warren asks, why should someone get a large sum for digging up gold when the labor is the same to dig a ditch? He failed to take into account the scarcity of the resource. Prices rise as goods with a limited supply become in comparably higher demand.

At one point, Warren even refused to sell his entire supply of grain to a speculator, because he wanted to be able to sell smaller amounts of grain to whoever needed it. Even when the businessman offered him more than just the cost of Warren’s labor for the grain, he still refused.

The Time Store did seem to be successful, however. Warren was able to keep it running, and the customers loved it because they could get goods for a better price. Then the labor notes could be traded so that if Warren didn’t need an hour of sewing, but a lumberjack did, Warren could get the labor from the lumberjack in exchange for the sewing labor.

Of course, the internet makes Warren’s ideas about human capital more viable. A website called Simbi.com allows users to offer their services in exchange for others’ services. Like the Time Store, if you provide a service, but aren’t interested in the services of your customer, you can earn Simbi credits instead, and spend these elsewhere. Services offered range from marketing help, athletic coaching, recipes, training to create products out of shopping bags, logo creation, relationship advice, and so much more. There are reviews, stats, and badges to help you know who is best to work with.

But Simbi is far from the only bartering service on the web. This MoneyCrashers article highlights 34 different web platforms for trading vacation accommodations, rides, clothing, children’s toys, books, and more.

Josiah Warren wanted to create a Utopian society. While he never fully succeeded in creating the perfect society, let alone separating one from the United States, his writing, and experiments in governance has influenced the efforts to create a more fair and just society.

Warren’s Time Stores didn’t stand the test of time, nor did his mini-societies which fell victim to land speculation. But his ideas have stood the test of time, and likely influenced others who came after him, like Lysander Spooner and Henry David Thoreau.

His contributions are little known and oft overlooked by those who fight for freedom. But he offers a unique perspective that differs from the typical libertarian or anarchist thinking. I certainly don’t agree with all he wrote, but his perspective offers an interesting challenge to entrenched beliefs about the market and serves as a churn to test their validity.