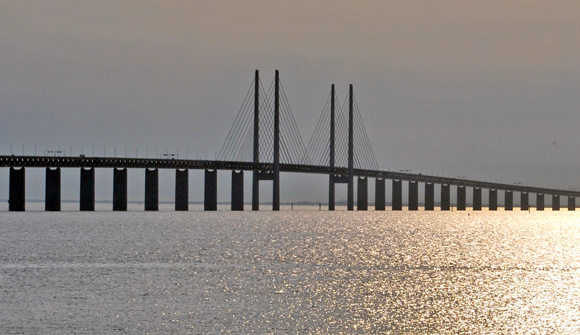 After 1 million migrants, Europe's borders are back … Since it opened in 2000, the Oresund bridge between Sweden and Denmark has been a towering symbol of European integration and hassle-free travel across borders that people didn't even notice were there. On Monday new travel restrictions imposed by Sweden to stem a record flow of migrants are transforming the bridge into a striking example of how national boundaries are re-emerging. – AP

Dominant Social Theme: Borders must be maintained and strengthened. That's the EU way.

Free-Market Analysis: A borderless Europe is no more, we learn from AP. Of course, there is a solution to this as well – and three clues give us a sense of what that is.

But let us examine the article first, as it builds a logical argument.

It is "terrorism" that has killed Open Europe; that much is clear. Terrorism and massive migration. The ID checkpoints on borders that a united Europe removed are now coming back into fashion.

Sweden, one of the most forward-looking European entities, is also one of those moving aggressively to control immigrant flows. It reportedly received some 160,000 asylum-seekers last year, "mainly from Syria, Iraq and Afghanistan."

But Sweden is not first on the list by any means, according to AP. Germany, Austria, France, Belgium and other countries are in the process of tearing down what used to be a passport-free travel zone that involved some 26 nations.

Of course, all this is considered temporary, but those who are supportive of a united Europe worry that the crisis will continue along with increased ID invasiveness. In fact, certain countries have formally suspended rules requiring them to keep their borders open.

The article quotes Mark Rhinard, an expert on the European Union at the Swedish Institute of International Affairs, as saying, "It's a significant development that strikes at the very heart of the EU project — the free movement of goods and people across borders. "

AP asks something very interesting at this point – whether the erection of physical borders will in some sense reignite nationalistic passions. Perhaps the open borders structure was more than a significant convenience; perhaps it was a key psychological factor in signaling a united Europe was viable and practical.

At this point in the article we come to a place where AP suddenly turns shy and drops several hints instead of making statements. Here are the pertinent grafs:

The crisis underlines structural flaws in the EU, showing how it has implemented common rules that it just can't enforce once the external pressures become too great, said Karl Lallerstedt, co-founder of Black Market Watch, a Switzerland-based non-profit group focusing on cross-border smuggling.

"It's not a strong federal state that can overrule its members," he said. "At the same time individual states have obligations to the EU. So you're in this sort of half-way house."

There are keywords here that indicate arguments are being structured for the future. The brain trust that runs Brussels intends to push forward with European centralization but they have been having trouble because most every part of the union is functioning inefficiently.

To some degree this should not be a surprise. We have often pointed out that EU planners placed the currency union ahead of the political union because one would drive the other.

It was too much to ask Europeans to support a political union anyway. But a currency union seemed harmless enough – even forward-looking and modern. The trouble was a currency union came with a single central bank and thus individual nations lost the ability to liquidate sovereign debt via monetary debasement.

This has had a tremendous impact on Europe, especially southern Europe, which is afflicted with joblessness, poverty and homelessness as never before.

It seems that Europeans wanted prosperity and freedom of movement. But they have traded their nation-states for authoritarian centralized rule and a one-size-fits-all monetary policy.

Of course, the Eurocrats are frustrated, too. The great EU convergence they long for has not yet taken place. But perhaps it will. The third clue surfaces toward the end of the article in a statement that people are going to grow fed up with the resurgence of border controls, especially as "bottlenecks" build.

We can see from these three clues that a meme is taking shape, one that will emphasize the union's structural flaws when it comes to providing efficient security.

This meme will suggest that there is no way around further centralization in order to restore order. Individual frustration with measures now being imposed will drive acceptance of an increasingly federalized Europe.

If this is indeed the case, look for numerous ramifications. To provoke a public outcry, Brussels may actually make the cross-border passage more onerous than it needs to be. And fears may be fanned to justify even further border complexity.

All of this may actually have an economic knock-off effect as well. Terrorism will be blamed for economic difficulties, in other words. Call this the "cross border" meme.