Birthed from the bloated bowels of US academia is a cottage industry of speech suppression on behalf of the corporate state.

It rolls out new pseudo-woke virtue-signaling campaigns whenever it gets the chance — the bread and butter of overpaid academics. Mortgages don’t pay themselves.

Enter the Dangerous Speech Project, which ostensibly claims to want to make speech “safer.” It is the brainchild of Susan Benesch, faculty associate at Harvard’s “Berkman Klein Center for Internet & Society” and an esteemed Ivy League “Scholar of Speech.”

The project defines “dangerous speech” as “any form of expression (speech, text, or images) that can increase the risk that its audience will condone or participate in violence against members of another group.” Yet, Benesch and comrades offer no way to objectively measure that increased risk of violence.

“Dangerous speech” as a social science concept conveniently lacks any way to objectively measure its applicability in any given real-world situation. This leaves the interpreting to the whims of the censor – perfect for Silicon Valley technocrats (more on that later). 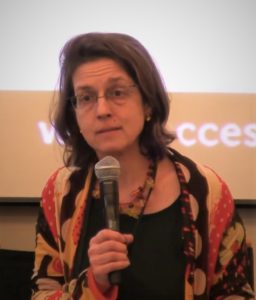 Susan Benesch, founder of Dangerous Speech Project and wearer of vaguely ethnic garb as a signal of her allyship

While the new terminology invented by Benesch has yet to catch on in the mainstream, it’s ripe for the snatching. CNN and MSNBC news actors would jump at the chance to push a ban on a newly invented category of (right-wing) speech.

The Dangerous Speech Project has already enjoyed elevated media platforms around the globe, hosting dangerous speech “workshops” in Myanmar, Thailand, and at the Holocaust Museum in D.C. The organization is clearly positioning itself at the helm of the new push to inflict yet another category of prohibited speech on the general public.

In an excruciating YouTube video introduction to her nonsense, Benesch attempts to explain that her new turn of phrase “dangerous speech” is distinct from “hate speech” and that, therefore, it deserves its own legal and institutional definition.

“If people could learn to identify this speech that seems to increase the risk of violence, then maybe one could decrease that kind of violence.”

Ironically, Benesch seems to define the very issue with her own new “dangerous speech” invention by discussing the absurdity of its partner-in-crime, “hate speech”:

“There’s a much more familiar term, of course, which is hate speech. The problem is that it’s hard to find two people who would define ‘hate speech’ in exactly the same way.”

She even brazenly acknowledges her own inability to define “dangerous speech,” even as the founder of the Dangerous Speech Project herself:

“I can’t give you a list of words that constitute dangerous speech, unfortunately, because language has such different meaning depending on who is listening.”

Rest assured that Silicon Valley and Wall Street are listening to Benesch.

In the modern era, corporations are quicker to enshrine invented new categories of speech into their policies than governments are to enact them into law. Peruse Facebook’s “Community Standards,” for example, and you’ll find fantastical new terminologies and preposterous standards of behavior that have yet to make their way into law.

Semantical engineering is a necessary component of a healthy censorship regime in the midst of a population that still enjoys relatively high access to information. The social engineers must consistently provide new explanations for their power grabs as they censor more of the language. New categories of speech to censor by fiat based on parameters invented out of whole-cloth are tools to that end.

The most pernicious danger of the current trend in digital censorship is that we lose the ability to articulate exactly what it is the technocrats are up to and how they are doing it.

Living under an oppressive system where it’s still possible to relay evidence among average people that censorship is taking place and even the systemic way in which it is instituted is much preferable to the nightmare scenario: a world in which even being allowed to disseminate the information necessary to understand the reality of systemic censorship is no longer possible.

Or, even worse, we may find ourselves without the vocabulary to articulate what is occurring. In the final stage, there will be no resistance because to even access the information required to understand the nature of the oppression at hand becomes impossible.

This is precisely what Orwell warned about in 1984:

“In the end we shall make thought-crime literally impossible, because there will be no words in which to express it. Every concept that can ever be needed will be expressed by exactly one word, with its meaning rigidly defined and all its subsidiary meanings rubbed out and forgotten… Has it ever occurred to you, Winston, that by the year 2050, at the very latest, not a single human being will be alive who could understand such a conversation as we are having now?”

Benesch and Co. would undoubtedly deny that the Dangerous Speech Project poses any threat to the ability to analyze, openly debate, and ultimately to understand complex ideas – the fundamental feature that distinguishes humans cognitively from lower primates. Their denials of the agenda they advance are to be expected.

16 seconds into her explainer video, Susan Benesch makes the obligatory nod to the Holocaust as evidence of her new speech category’s imminent danger to humanity. Soon, opposing the censorship of “dangerous speech” will be tantamount to Anti-Semitism in the same way that criticizing any pet project of the social engineers from the right or the left or the center is invariably Anti-Semitic, racist, sexist, misogynistic, transphobic, Islamophobic, etc.

The mass-scale psychological manipulation is right in front of our faces. Nazis behind every corner. Nazis behind you in the line at Starbucks. Nazis at your kids’ soccer game. Nazis at the PTA.

Benesch and Co. will root them (you) out.