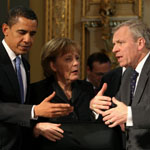 Barack Obama, the World's Greatest Orator (TM all news organizations), didn't exactly cover himself in glory when the BBC's political editor Nick Robinson asked him a question about who was to blame for the financial crisis. Normally word perfect, Obama ummed, ahed and waffled for the best part of two and a half minutes. Here, John Crace decodes what he was really thinking …

Nick Robinson: "A question for you both, if I may. The prime minister has repeatedly blamed the United States of America for causing this crisis. France and Germany both blame Britain and America for causing this crisis. Who is right? And isn't the debate about that at the heart of the debate about what to do now?" Brown immediately swivels to leave Obama in pole position. There is a four-second delay before Obama starts speaking [THANKS FOR NOTHING, GORDY BABY. REMIND ME TO HANG YOU OUT TO DRY ONE DAY.] Barack Obama: "I, I, would say that, er … pause [I HAVEN'T A CLUE] … if you look at … pause [WHO IS THIS NICK ROBINSON JERK?] … the, the sources of this crisis … pause [JUST KEEP GOING, BUDDY] … the United States certainly has some accounting to do with respect to . . . pause [I'M IN WAY TOO DEEP HERE] … a regulatory system that was inadequate to the massive changes that have taken place in the global financial system … pause, close eyes [THIS IS GOING TO GO DOWN LIKE A CROCK OF SHIT BACK HOME. HELP]. I think what is also true is that … pause [I WANT NICK ROBINSON TO DISAPPEAR] … here in Great Britain … pause [S–T, GORDY'S THE HOST, DON'T LAND HIM IN IT] … here in continental Europe … pause [DAMN IT, BLAME EVERYONE.] … around the world. We were seeing the same mismatch between the regulatory regimes that were in place and er … pause [I'VE LOST MY TRAIN OF THOUGHT AGAIN] … the highly integrated, er, global capital markets that have emerged … pause [I'M REALLY WINGING IT NOW]. So at this point, I'm less interested in … pause [YOU] … identifying blame than fixing the problem. I think we've taken some very aggressive steps in the United States to do so, not just responding to the immediate crisis, ensuring banks are adequately capitalized, er, dealing with the enormous, er … pause [WHY DIDN'T I QUIT WHILE I WAS AHEAD?] … drop-off in demand and contraction that has taken place. More importantly, for the long term, making sure that we've got a set of, er, er, regulations that are up to the task, er, and that includes, er, a number that will be discussed at this summit. I think there's a lot of convergence between all the parties involved about the need, for example, to focus not on the legal form that a particular financial product takes or the institution it emerges from, but rather what's the risk involved, what's the function of this product and how do we regulate that adequately, much more effective coordination, er, between countries so we can, er, anticipate the risks that are involved there. Dealing with the, er, problem of derivatives markets, making sure we have set up systems, er, that can reduce some of the risks there. So, I actually think … pause [FANTASTIC. I'VE LOST EVERYONE, INCLUDING MYSELF] … there's enormous consensus that has emerged in terms of what we need to do now and, er … pause [I'M OUTTA HERE. TIME FOR THE USUAL CLOSING BOLLOCKS] … I'm a great believer in looking forwards than looking backwards. – UK Guardian

Free-Market Analysis: There is virtual Obama-mania in the media throughout the Western world following the G20 summit. The most enthusiasm seems to come from Britain where much discussion has been generated following Michelle Obama's touching of the Queen. (She put her arm around the diminutive monarch.) In the meantime, Western leaders have been praising President Obama himself, with the Russian leader calling Obama his comrade and the French President, Nicolas Sarkozy exclaiming that Obama is someone he can do business with.

But despite the great impact that Obama has had on world leaders, the reality of what has been accomplished and Obama's own personal understanding of what is actually going on remains suspect. He is a very young man for the world stage, with a Harvard law education that apparently doesn't equip one to understand real economics and it is increasingly understandable why he travels everywhere with a teleprompter.

But teleprompters are not always available during press conferences. One way that Obama has gotten around this problem at home is to call on selected individuals whose questions are known to Obama in advance, thus giving his staff time to prepare answers. Also, the questions that Obama seems to get at press conferences often are not very difficult ones.

When he does get asked an honest question, however, in an honest and open venue, the results can be problematic. That is, in fact, why the article excerpted above is so interesting. The Guardian itself is a leftist paper that should be counted on to support Obama, but obviously his performance as regards an answer to at least one economic question was so lacking in serious content that Guardian columnist John Crace not only noticed but felt compelled to comment.

Of course, we don't blame him. We have noticed previously when Obama speaks on economic matters extemporaneously, the uhs and ers go up dramatically and while the eloquence and even the ability to speak in an understandable way goes down noticeably.

We are not pointing this out to take a cheap shot at the American president. It is actually a very important point. And a worrisome one. Whenever Obama speaks out of pocket, especially on economic issues, he has difficulty making sense. He tends to string together bits and pieces of campaign slogans, speeches and odds and ends of previous answers, the ones he can recall, anyway.

In the case of the answer above, what Obama said can be summarized as follows:

Yes, the American regulatory system was inadequate, but the regulatory systems were mismatched and overmatched in Europe, too, and could not cope with potential abuses offered by an increasingly global financial system. There is a need to focus on risk, not products and on coordination between Western financial centers. Derivatives risk needs systemic overhaul as well. But ultimately, we need to look forward not backward.

This is close to gibberish. The financial crisis was caused, at its heart and root, by central banking stimulation via paper money which misaligned wealth and resources to such a degree that a worldwide crash was eventually inevitable. The solutions the G20 has proposed – regulating tax havens, stimulating depressed countries with additional funds from the International Monetary Fund and some sort of increased, coordinated regulatory regime – are no more persuasive than Obama's fumbling answer.

So … the question itself – what caused the financial crisis – has never been satisfactorily proposed and the solutions therefore are equally lacking. Again, Obama doesn't seem to care. One gets the feeling, in examining Obama's teleprompter-less rhetoric, that he is reciting a string of phrases that have little more meaning to him than the reminiscences of a schoolboy over his head in a class not of his liking. Of course, Obama has goals and is a most intelligent man. But his intelligence is harnessed to his agenda, and his agenda has little or nothing to do with delving into the root causes of global financial dysfunction.

When it comes to the economic crisis, Obama seems uninterested in internalizing either real difficulties or credible solutions. In fact, it is a measure – not of his intellect – but of his intellectual agenda that he does not seem to care. It is not important to him. He is not interested. Again, this is worrisome. What IS he interested in, anyway?