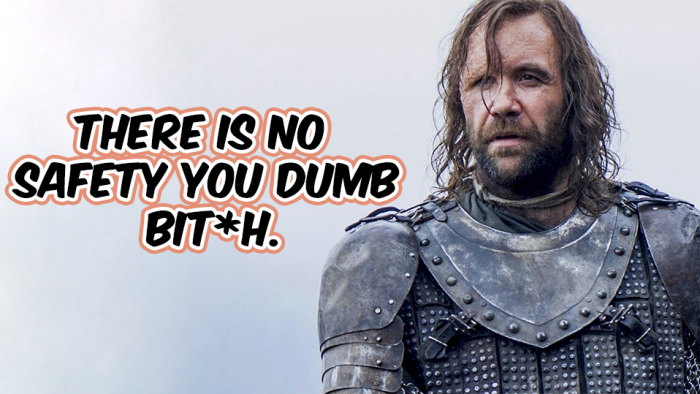 Take heed of The Hound’s warning, and let it free you.

There is no guarantee of a job or safety net, there is no absolute security from evil doers, and there is only so much you can do to prevent accidents and illness. The silver lining is that recognizing this is the best way to cushion yourself from the vulnerabilities of an unpredictable world.

Brienne of Tarth, in Game of Thrones, nobly intends to uphold an oath she swore to Lady Stark to keep her children safe. But she is also a bit naive about the nature of the world in which she lives.

Brienne thinks she can bring Arya to a safe place, wherever that is. But as The Hound so eloquently reminds her:

“There is no safety you dumb bitch. And if you don’t know that by now, you’re the wrong one to watch over her.”

If Brienne thinks she can ever let her guard down, or relax, she will never be safe. There is no destination at which point she and Arya will be ultimately secure. It just does not exist.

And Sandor Clegane–The Hound–is right; if Brienne of Tarth cannot understand this basic fact about the world, she is the wrong person to be watching over Arya.

The Hound’s negative view on the danger in the world actually leaves him less vulnerable. He never expects to be safe, and is therefore safer because he is alert to danger.

As rough as the Hound is, Arya was in fact safe the entire time she was with him. This was no guarantee, it’s just how it happened, mostly due to the fact that The Hound knows is constantly vigilant against danger.

And although Brienne’s goal is to make Arya even safer, she instead severely wounds the person protecting Arya. Brienne incorrectly judges The Hound to be a danger to Arya, and then fails to secure Arya, leaving her more defenseless than she had been previously.

Brienne’s actions actually prove The Hound’s point. Brienne’s belief that she could bring Arya to safety created a dangerous situation that could have been avoided if she only realized that safety is a constant effort, and not a destination.

But Should We Really Apply a Lesson From a Fake Story in a Mythical Setting?

In the modern world we are much safer than humans were in the middle ages. And in the real world there are certain things we don’t have to worry about, like white-walkers and dragons.

But unfortunately we do still have to contend with the likes of Cersi and the Lannisters, the Ramsy Boltons, and the treacherous Freys all playing their part in our world’s own “Game of Thrones”.

In our lives, they are usually less murdery and slightly more subtle in their elitist desire for domination.

The lesson however remains: there is no guarantee of safety (you dumb bitch).

But before you think I am being gloomy and pessimistic, consider the gift of understanding this.

In the pursuit of the ultimate goal of “safety” we expose ourselves and society to all sorts of dangers.

For instance, even assuming the US government had the best intentions over last two decades of drone bombing the Middle East, to supposedly make us more safe, all it really did was create more terrorists. When innocent civilians get murdered by the USA’s bombs, their friends and family become radicalized.

Would there still be terrorists and crazy people without all that provocation? Yes, I’m sure. But the numbers would most likely be lower, and we could focus on actual defense.

And even if we assume, for example, that the PATRIOT Act and indefinite detainment clause in the NDAA were passed with the best intentions of targeting terrorists, they has made our own government a much greater threat with the powers they granted.

The people who advocate gun control, strict Covid lockdowns, or a government safety net are like Brienne of Tarth, making us less safe because they misunderstand the inherent danger that life carries with it.

If other people take away our agency to respond decide what are the biggest threats facing us, or force us to respond to those threats in a particular way, they will inevitably put us in more danger.

That is especially true if they suffer no consequences for their decisions. For example if the people who ban guns can afford to hire private security, then what difference does it make to them if you can’t protect yourself when your home is invaded?

We like to imagine a perfect society in which we are secure, safe, comfortable, and just generally all set, happily ever after.

But the desire for a finish line is elusive. We can make ourselves robust against threats, or even anti-fragile so that we could gain from disorder, as Nicholas Nassim Taleb says. But even this requires maintenance and vigilance. You always have to be understanding new threats, and preparing more options which you can choose to exercise, depending on what happens next.

And this goes as much for economics as for physical safety. Don’t expect Social Security to be there for you, have a backup plan. There is no guarantee that any one currency will always stay stable, valuable, or even continue to exist. Don’t put all your eggs in one basket, including streams of income, and the skills you have to earn a living.

At the end of the day, safety comes down to vigilance. Unless you are constantly on alert to those things which threaten your safety, you will be taken by surprise.

It doesn’t really matter if the person making you less safe is the well meaning but naive Brienne of Tarth or the calculating power hungry Cersi Lannister.

Cersi, in a sense, is safer to be around, because you understand that she is dangerous, and can protect yourself.

But how can you protect yourself from someone who thinks they have your best interests at heart, whether you like it or not?

Some people will have noble goals and try to force you into their “safe” world that they have flawlessly designed for security. Their ignorance makes you just as vulnerable as Cersi’s malevolence.

Others will offer us safety, utopia, and ultimate security that we can just accept and then forget about. This will lead us down a path of vulnerability.

Whether those who lure you into the false sense of security are doing so because their goals are noble, or because their motives are nefarious hardly matters.

We must each be at liberty to look after our own safety.

Arya, for example, had chosen to stick around The Hound and benefit from the safety he provided. When he was incapacitated, she could have chosen to be protected by Brienne, but instead she chose to go it alone, and protect herself. She ultimately became much more capable for it.

And that is essentially the option we all need if we hope to make the world a safer place.

We should be able to choose our own government– and not just from the 200 or so very similar, subpar options currently available.

And we should also be able to choose to go it alone, or create our own society, if we don’t like the options available.

The ability to take our business elsewhere, without threat or force, will create a market for the best protection against various threats, which will improve the variety and quality of the services offered.