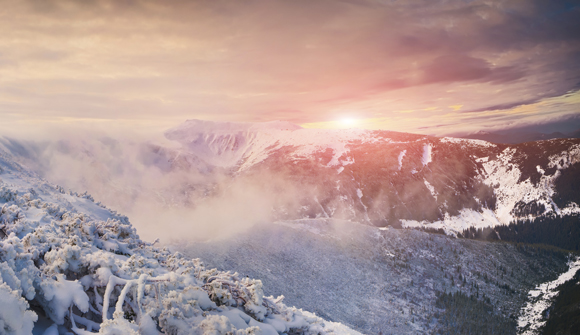 European economic storm is casting dark clouds over Davos … Slow growth and low inflation seem to have become the established condition, at least for advanced Western economies … This year's World Economic Forum is witness to a kind of capitulation, or sense of resignation. – UK Telegraph

Dominant Social Theme: Times are tough, even for top servants of the system.

Free-Market Analysis: The "big brains" gathered in Davos are mostly successful in material terms and powerful from the standpoint of our modern economic system.

But in the early 21st century, these attributes may prove ephemeral. And that's probably the reason for the gloom that is being reported in the mainstream media.

Also, since it's being widely reported, it could be that mainstream media types are anticipating something worse and the Davos reports are a kind of pump-priming.

It is always advisable to be wary of the consensus view, and particularly that of Davos, which can be a remarkably accurate contrary indicator. Yet this time around, it is hard to fault the prevailing, relatively downbeat mood that pervades this annual meeting of business, political and civic leaders.

Ever since the financial crisis first erupted, there has been a strong presumption that eventually things would bounce back to their pre-crisis norm. This year's World Economic Forum is witness to a kind of capitulation, or sense of resignation.

Slow growth and low inflation seem to have become the established condition, at least for advanced Western economies, and no one is able to articulate a plausible reason for thinking they might break free.

Once-fast-growing markets are no longer growing as rapidly as they were, while the slow-growth markets of the West are struggling to show any growth at all, with very little sign outside the US and the UK of a return to past levels of income growth.

In these circumstances, the corporate focus becomes very much that of costs and the bottom line. Pricing power has switched almost entirely from the seller to the consumer and the procurer.

On top of this cyclical fund, there is profound structural change, with the digital economy throwing up myriad challenges for the established players of the business landscape. Nowhere is this more apparent than in media, where the disconnect between what companies are providing and underlying consumption patterns has never been greater.

According to estimates compiled by the technology analyst Mary Meeker, and cited here in Davos by Sir Martin Sorrell, chief executive of the advertising goliath WPP, newspapers and magazines still account for 19pc of all advertising spend in the US, but are now only 5pc of time spent viewing media.

The picture is almost as stark for established TV, which accounts for 45pc of all advertising but an ever-diminishing share of time spent in media. These statistics point in only one direction. Media may be at the cutting edge of such change, but there is no industry unaffected by it.

These statistics point out something more than media dysfunction. It's hard to avoid the conclusion that those holding corporate purse-strings still don't want to fund the 'Net media because they would have to explain advertising decisions that are decidedly unreasonable.

That is, they would have to fund mainstream media efforts that are not nearly as significant or successful as numerous alternative media messages. The target of ad dollars would have to be justified or at least explained. Better simply to avoid the conversation altogether.

Ad dollars will only start to flow bountifully if and when alternative media successes on the Internet diminish and mainstream media finds some way of being relevant in the electronic sphere. That hasn't happened so far.

But this is part of what is depressing the power brokers at Davos. It is what caused Jay Rockefeller to say the Internet shouldn't have been developed and Hillary Clinton to exclaim that the mainstream power structure was losing the communications war.

Those at Davos are grappling with two separate disasters. On the one hand, economic vitality has not returned to the West or even to the world. On the other, people are looking considerably askance at modern sociopolitical and economic systems – and the grinding downturn is making cynicism a good deal easier to adopt.

We commented on this recently in our analysis entitled, "Davos Will Focus on Loss of Trust Regarding Big Business and Big Finance." In our conclusion, we stated the following:

What we call the Internet Reformation will continue to deal blows to the profile and trustworthiness of Big Business and Big Finance. Thus, this is not something that can be alleviated by better customer service. The tensions between customers and the mercantilist entities that serve them is part of a larger structural issue.

We accept the notion that trust will continue to erode when it comes to large institutions generally, whether they are those of government or big business.

In fact, as we have written continuously, we don't see the situation changing until some of the most powerful legal doctrines of our time are overturned in some form or other. This is just one more trend supporting an increasingly chaotic sociopolitical and economic environment.

This is presumably what those in Davos are finally perceiving, as well. Circumstances have not proven to be ephemeral. After six years of economic difficulty, the landscape seems permanently changed.

This article says as much: "Europe is widely accused here in Davos of ineffective incrementalism and denial. It's impossible to disagree."

This accusation is made specifically as regards the ECB's planned trillion euro stimulus. But it could be aimed at any one of a number areas. In the 20th century, the system's cognitive dissonance was fairly easy to disguise. Not so in the 21st.

Perhaps there will be announcements of substance issuing out of Davos. But even these will likely see little follow through. The more dangerous times are ahead of us – as ruling elites grow more desperate to sustain a failing system.

Top globalists may already have decided this – or so we think. The only solution to an abiding and evolving failure of trust is … chaos. Economic chaos, military chaos – whatever distracts people from acting on their disenchantment.

Those who are used to holding the reins of power will do what they can to pass them on in the midst of a great deal of social confusion. Thus, it is probably dawning on those at Davos that the "good times" are not returning and that the solution to the current worldwide crisis of confidence is not intended to be a rational curative but increased chaos of all sorts.

The effort to sustain one's control at the very top may well involve the sacrifice of "teammates." Too bad for them.