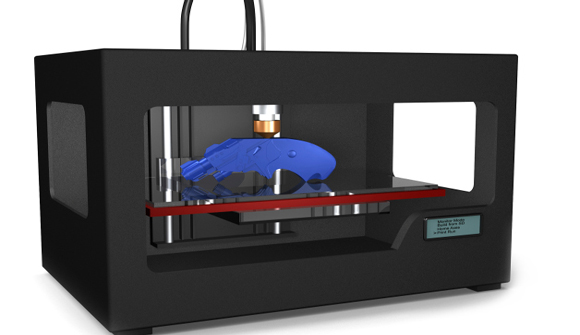 Solid Concepts' Printed Metal Gun on Sale … In just short of two months 3D printing firm Solid Concepts has introduced, and will now sell a 3D printed metal gun. While the model M1911 semi-automatic pistol is made from stainless steel and Inconel 625 it's going to cost you a bit more than your standard issue US Army pistol. – Engineering.com

Free-Market Analysis: The printed metal gun referred to in the above article excerpt is an illustration of what we might call the Law of Internet Reformation. Or we might call it karma: For every action there is a reaction.

The information/technology revolution that so dispirits many in the alternative 'Net media is – as we have long argued – a tool for enlightenment as well as authoritarianism. This is not generally appreciated by the doom-and-gloom crowd that predicts destructive scenarios.

The 3D gun is a good example. Only a few months ago, there were numerous primitive images of a "gun" flooding the Internet. Now there is the Solid Concept gun, which looks like it was put together by a master craftsman.

According to Solid Concepts its 1911DMLS will run you $11,900, a figure that should buy you an entire arsenal not just a single weapon. However, for some firearms enthusiasts the 1911DLMS might be worth the money as Solid Concepts has stated it's only planning to make 100 of the laser sintered pistols.

Along with a 1911DMLS handgun potential buyers will also receive a wooden showcase box adorned with a 3D printed metal plaque that describes the gun's unique properties and a certificate of authenticity. In addition buyers will have the opportunity to tour Solid Concepts facilities and join their engineers at a shooting range for a round of target practice.

"This is a chance to own a piece of history," said Scott McGowan, Solid Concepts' Vice-President of marketing. And while that's certainly the case it's also an excellent way to showcase the abilities of DMLS printing.

We are not alone in our admiration of this gun, which would make a helluva of Christmas present for the gun collector who has everything else. Here's something from a Reason article back in November commenting on the gun:

Politicians have fretted since Cody Wilson and Defense Distributed unveiled the first 3D-printed gun that plastic pistols raised concerns about DIY undetectable firearms. Do you think the Solid Concepts announcement will allay their concerns and set them to worrying over something else? Hmmm…

… For Solid Concepts, a California-based firm with offices in Arizona, Texas, and Michigan, (the gun was printed in Texas) the 3D-printed gun, more than anything else, was an attention-grabbing way of demonstrating the company's ability to use new technology to construct tough and durable products.

… New technology has a way of coming down in price as it matures and spreads—a phenomenon that can only be encouraged when laser-sintering patents expire in a few months.

Bingo. This kind of technology moves quickly in the modern era and it offers problems that go beyond weaponry. Soon efficient 3D-printed cars are going to be offered, and this will shake our current 20th industrial paradigm to its core.

There are numerous foundational elements of control in modern Western society. These are generated by a banking elite that fears the West's middle classes and sees them as standing in the way of a fully internationalized world.

Two main technology memes are "gun control" and the "electric car." Both of these dominant social themes are good examples of directed history.

When it comes to gun control, governments around the world have used incidents of gun violence as a way to diminish the gun trade and even criminalize it. Some of these are legitimate but others evident and obvious false flags. The point is basically that the middle class is to be disarmed. The same thing happened in Nazi Germany.

The electric car is another questionable theme. Nobody that we know of was clamoring for an electric car five years ago when they suddenly began to reappear. We've been pointing out for the longest time that electric cars offer their makers a good deal of control over customers.

The recent craze is to sell the car while leasing the battery, which appears at least questionable to us. A leased battery is a loaned battery and presumably civil officials can do a lot more with a loaner than a purchase. Didn't pay a ticket? You may find you are incapable of charging your car. Same for a lapsed license, lapsed insurance, etc. The possibilities are limitless.

These 3D printers are akin to the Gutenberg press that gave the elites of the day so much difficulty that they finally invented copyright to clamp down on the free flow of information.

People could hide the relatively small press most anywhere. And thus it is with 3D printers. A combination of public domain software, high-quality memory sticks, powerful computers and efficient and technologically advanced printers are a poisonous brew for those who want to control travel and limit self-defense.

The impact is not going to be felt right away but it will be felt soon. Those at society's top are already struggling to control what is available over the Internet. David Cameron is actually trying to ban a large swath of the 'Net from England. But how he is going to ban 3D printers and the surreptitious swapping of memory sticks and software programs that will eventually, inevitably, allow people to make a variety of things that hitherto have been fairly rare within the context of domestic craftsmanship?

Of course, you will also need material to fabricate with, but no doubt that will become more available as 3D printing becomes more efficient and available.

As technology continually speeds up, growing exponentially in efficiency over shorter and shorter timeframes, those who wish to control and further globalize society will have an ever more difficult time maintaining control.

The time sequences between technological breakthroughs are diminishing, which gives those who oppose them less and less time to develop the promotional campaigns needed to justify halting them.

Not only that, but ironically it is central banking and fiat money itself that is creating the feverishly expanding technology that is proving harder and harder to control.

The saying "hoisted on their own petard" comes to mind.