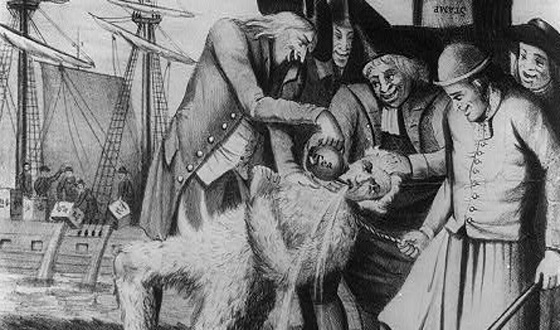 STAFF NEWS & ANALYSIS
What ever happened to the radical conservative?
By Joe Jarvis - June 25, 2019

These are the radicals conservatives cite today who allegedly inform their political opinions. These are the guys who warned us against a standing army and shot British soldiers rather than surrender their arms.

Yet today conservatives are more likely to support the police than to see them as the standing army the Founders warned against.

Benjamin Franklin’s warning against giving up freedom for security has fallen on deaf ears as polling continuously shows conservatives are the most likely group to view police favorably.

They will gladly cite the unjust laws that needed to be broken in the run-up to the Revolutionary War.

But instead of calling for more freedom today, conservatives spout off about just obeying the law.

Too bad there are now so many laws that you can’t go through a day without breaking at least one. And at that point, the government can arrest anyone at any time for anything— that’s the definition of tyranny.

And anyway, following the law didn’t work out for Philando Castile, shot to death during a traffic stop after cops pulled him over because he “resembled” a robbery suspect.

Castile was a legal firearm permit holder, who informed the police officer that he had a firearm on him. He did exactly what we are told we should do with police officers… be truthful, stay calm, follow their orders.

There is a video of the killing that made it crystal clear the cop murdered Castile–whether or not he wrongly feared for his life. And yet the officer was acquitted.

Where the hell was the revolutionary fervor from conservatives then?

Conservatives are the ones who correctly claim the real point of the Second Amendment is to protect against a tyrannical government.

Spoiler alert: the cops are the ones you’re going to have to shoot if guns are outlawed. They are the ones who will arrest you at gunpoint if you don’t turn in your bump-stock and silencer, as this “conservative” President has mandated.

And I’m over here waiting for conservatives to fight for the right to own a machine gun and mortar.

Yes, I do need a rocket launcher, thank you very much. The Venezuelans could have used them recently when military vehicles started running over protesters in the street. Explosives would have come in handy at Tiananmen Square in China in 1989.

I grew up believing–apparently incorrectly–that it would be the conservatives who fought back if our own government ever became that oppressive.

John Brown sacrificed his life breaking into a US armory to try to arm the slaves to revolt against their oppressors.

Where are the abolitionists today? Where are the conservatives calling attention to the racism inherent in firearms permitting? Or the police state built on the drug war?

So now conservatives want a strong centralized federal government to tell people old enough to serve in the military and take on $100,000 of student loans that they can’t light up a cigarette?

Another Republican Senator introduced legislation that would force platforms like Facebook and Youtube to remain politically neutral, and prove their innocence to bureaucrats by turning over private documents.

So now it is “conservative” to violate the First and Fourth Amendments, just because it’s your “side” is being turned away by private companies? How is this any different than forcing bakers to bake a cake?

Texas is ready to make sex jokes illegal on college campuses, then arrest and prosecute professors if they fail to report anything that could even remotely be considered offensive by the most delicate snowflake. Texas!

Then there are the “conservatives” who want to ban burning or disrespecting the American flag, even though it is clearly protected freedom of expression, no matter how offensive you find it.

The irony of making it illegal to mistreat the alleged symbol of freedom is apparently lost on them.

This is what the supposed supporters of the Bill of Rights are focused on– not the fact that we owe the government half of the annual fruits of our labor, not the fact that we can be thrown in a cage for smoking a plant that George Washington grew, or that federal laws trample state autonomy.

Seriously, if this is what conservatives stand for these days, they are no different than the big government progressives. It is simply a war of factions, to see who will control the American people.

Pick your brand of totalitarianism.

But in some ways, these conservatives are worse than the progressives. Because in addition to supporting huge unrestrained government, they lie about it.

At least progressives are open about their desire for the state to dominate their lives.