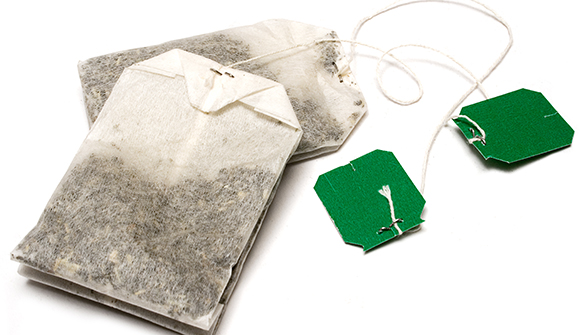 STAFF NEWS & ANALYSIS
What Tea Bags Are Telling Us About the Ties that Really Bind
By Staff News & Analysis - July 09, 2013

The new enemy of the planet … are humble tea bags really doing untold damage? … As the new Bank of England chief's wife attacks them, are humble tea bags really doing untold damage? Mark Carney's wife has criticised teabags as a waste of paper The UK is the second-largest tea market in the world, and Ireland is the first … Diana Carney, Mark Carney's wife, says teabags are an environmental threat Some environmental activists get worked up about rainforests. Others worry about the plight of polar bears or the perils of rising sea levels. But for Diana Fox Carney, an economist, green guru and wife of the new Governor of the Bank of England, the issue that gets her really, really hot under the collar is the humble tea bag. She describes the leaf-filled sachets as one of her 'pet hates' and says they are an environmental disaster. – Daily Mail

Dominant Social Theme: There are many things to be worried about and we should be vigilant about them.

Free-Market Analysis: Is it fair to write about Ms. Carney and her preoccupations, given that she is a private citizen and not one of the most powerful people on the planet – like her husband Mark Carney, head of the Bank of England?

Our answer is obviously a qualified yes because Ms. Carney is open and forthcoming about her views and apparently hasn't ceased to espouse activist views even after the ascension of her husband.

She comes across as hypersensitive and politically correct on a variety of issues ranging from women's liberation to the environment and blogs regularly about issues connected to "how to save the world."

There's nothing wrong with this, of course. She's obviously entitled to have her say but we would suggest that she is reaching a good many more people now that her husband has gained such a prominent position.

'Do we really need an extra 40 square cm of bleached and printed paper with every cup of tea?' she writes on her blog, which reviews eco-friendly products. Her husband was hopefully too preoccupied with the huge challenges of his new job at Threadneedle Street which he started yesterday to worry unduly about the contents of the Bank of England tea urn.

But for those millions who adore the convenience of the tea bag, it was enough to make us choke on our Tetley's. So does Mrs Fox Carney have a point? And are tea bags really doing untold harm to the planet?

… Major brands such as PG Tips, Tetley and Typhoo no longer use wood pulp to make their paper, but a vegetable fibre derived from the abaca plant — a relative of the banana grown mostly in Indonesia and South America. However, we certainly use a lot of it.

… More than 55 billion tea bags are dunked, squeezed and tossed away each year in the UK alone. It adds up to a lot of paper, particularly when so many tea bags are no longer rectangular — the least wasteful design for a tea bag — but round or pyramid-shaped.

… Unless you buy from an environmentally-friendly company such as Clipper (which uses unbleached bags), most of us consume clean, white tea bags that are the result of intensive chemical processes. Once, the wood pulp or vegetable fibre used in tea bags was bleached with chlorine to make it white rather than an unappealing grey.

However, bleaching attracted criticism from environmentalists because minute amounts of potentially toxic byproducts such as dioxins and furans, chemicals which cause harm when ingested, could remain in the paper and could leak into a cup or mug.

… According to the Government's waste body, Wrap, tea is the largest element of 'avoidable food waste' in our dustbins. Wrap estimates that British tea drinkers throw out 370,000 tonnes of tea bags and tea leaves each year along with vegetable peelings, onion skins and coffee grinds. Most of this ends up in landfill sites.

The Daily Mail article concludes with the suggestion, "In a world where there are genuine environmental problems, anxieties about mostly compostable teabags are misplaced."

But perhaps this is the wrong issue on which to focus. We think the larger question – deserving of scrutiny – is how such an environmental activist and seemingly anti-capitalist person is the spouse of one of the most powerful capitalists on Earth.

At first glance, Mark Carney and his wife would seem to be terminal opposites and one might be pardoned for wondering if they were growing apart … going in opposite directions.

But, in fact, we would argue the two Carneys are actually in sync, spiritually anyway. That's because in their own way, the two Carneys believe in a certain kind of managed authoritarianism.

As a feminist and social and environmental activist, Ms. Carney wants to use the force of government to impose her lifestyle perspectives on others. But isn't Mark Carney involved in the same sort of thing?

The Bank of England is responsible for mandating the price and volume of money for the British economy. Mark Carney's job is to figure out how much money the economy needs now and in the future and then implement his monetary views via force of law.

Both Carneys rely on the force of law to implement their disparate perspectives. It is this authoritarian streak that surely unites them. In this regard, one could consider both of them statists, wedded to the forceful suggestions of the state even though they seem to have somewhat different agendas.

The linkage here is the philosophical acquiescence to the use of force and that is perhaps more congruent and powerful than their political and economic philosophies.