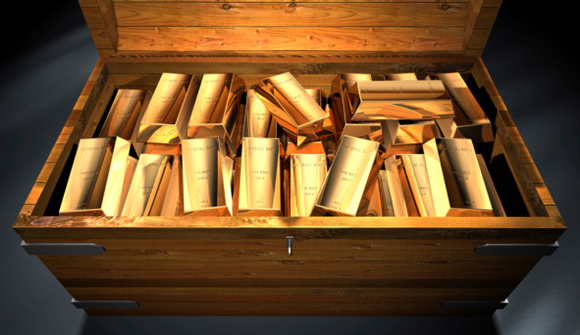 For the powerful city-state of Athens in ancient Greece, the year 430 BC was one of the most tumultuous and dramatic in its history.

Prior to 430 BC, Athens had been at the pinnacle of stability and power for decades.

But in the course of that single year, the city was invaded by Sparta at the outbreak of the Peloponnesian War; Athenian officials essentially impeached their leader, Pericles, and put him on trial; and a deadly plague killed off up to 20% of the population.

But despite all the hardship, Athens still managed to prevail. And that was in no small part due to the government’s enormous treasury surplus.

Historical records from that era show that Athens had 9,700 talents of cash reserves in its treasury.

Now, a ‘talent’ was an ancient unit of measurement for gold and silver which was equal to roughly 26 kilograms.

Given city-state’s population in the 5th century BC, that works out to be nearly $25,000 (in today’s money) for every single Athenian citizen at the time.

Bottom line, ancient Athens had plenty of cash tucked away for a rainy day. So when the mother of all storms came, they had the savings to survive.

History shows that such fiscal responsibility is EXTREMELY unusual. Most countries and governments tend to increase their spending and decrease their savings when they reach the heights of their power.

They believe that their power and wealth will last forever. So they start racking up huge debts and deficits in a belief that the future will look exactly like the present.

This is a completely irresponsible practice, but it’s incredibly common. And we see it everywhere today.

2020 has obviously been an inconceivable year… and it’s most likely going to become even crazier before it’s over.

But even before 2020, most of the ‘wealthiest’ nations in the world were posting huge budget deficits at a time when everything was still normal and OK.

I wrote about this extensively over the past few years, pointing out that, if the US government was losing $1 trillion per year during an economic boom, how bad would the results be during troubled times?

Well, we have our answer.

Over the past six months alone, the US federal debt has increased by more than $3.5 trillion. Total federal debt now stands at more than $27 trillion– more than $80,000 for every man, woman, and child in the Land of the Free.

And remember– the entire size of the US economy is $19.5 trillion according to the federal government’s latest data.

So the debt is now a whopping 138% of GDP. That smashes the previous record of 118% set during World War II.

And of course the figure gets worse every year. In a good year, the economy grows by 2% to 3%. But the national debt has been growing at more than twice that rate.

None of this takes into account other unfunded liabilities– like the fact that Social Security’s trust funds will be fully depleted within the next 10 years. Replenishing them will cost tens of trillions more.

This is clearly not sustainable. But any sense of fiscal prudence has been thrown out the window because of a virus.

There are vast factions of scientists, reporters, and politicians who still want to shut businesses down, and then send everyone free money that the government finances by going deeper into debt.

The Federal Reserve has been very supportive of this idea.

In order to facilitate this bonanza of free money, the Fed has printed trillions of dollars over the past six months and slashed interest rates back down to zero.

They’ve also committed to keeping rates low for years to come, and just last week they warned of ‘tragic’ consequences to the economy if the government doesn’t hand out trillions of dollars more in free money (and go deeper into debt in the process).

Who knew it was so easy to be prosperous? Ancient Athenians worked hard, saved money, and set aside an enormous surplus for a rainy day.

These days apparently you just have to print money and go into debt in order to prosper.

This is a huge reason why I believe that gold still has long-term potential, just as it did back in ancient Greece.

Gold has enormous value in times of uncertainty… and we’re definitely living through that now.

Who’s going to win the election? What impact will that have on the economy and public finances? Will a subsequent outbreak of Covid (or a new virus in the future) cause a stock market panic? Will there be more rioting and chaos in the streets?

These questions barely scratch the surface of what we don’t know. But it’s clear there are a lot of high-impact risks on the table.

Gold has traditionally been a great insurance policy against that sort of extreme uncertainty.

But even more importantly, it’s a safe haven during times of appalling fiscal irresponsibility. And that’s precisely what we have now.

They’re going to vastly expand the debt and print money for years to come. They’ve already told us as much.

And that’s what makes gold such an attractive, long-term asset.

Short-term, the gold price is anyone’s guess. Gold has already had an incredible run this year, and it’s possible we might see a price decline. No one knows.

But if you’re thinking about the world long-term, it’s definitely worth considering gold as part of a robust Plan B.