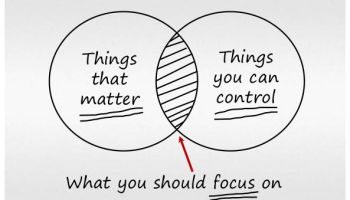 For instance, preventing global nuclear war matters. But you cannot control it.

You can control what color car you drive. But this doesn’t really matter.

But eating healthy matters, and you can control it.

The New York Times ran a piece called The Man Who Knew Too Little. He decided to create a news blockade in his life after Trump got elected last year.

He doesn’t engage at all with news anymore. And it has been pretty effective. The only things he has heard about in the last year are the Equifax data breach, something to do with North Korea, and Obamacare back in the news. Otherwise, he has successfully blocked the media from his life.

Democrats, liberals and leftists have coped with this first year of the Trump presidency in lots of ways. Some subsist on the thin gruel of political cartoon shows and online impeachment petitions. Others dwell online in the thrilling place where conspiracy is indistinguishable from truth. Others have been inspired to action, making their first run for public office, taking local action or marching in their first protest rally.

Mr. Hagerman has done the opposite of all of them.

The fact that it’s working for him — “I’m emotionally healthier than I’ve ever felt,” he said — has made him question the very value of being fed each day by the media. Why do we bother tracking faraway political developments and distant campaign speeches? What good comes of it? Why do we read all these tweets anyway?

“I had been paying attention to the news for decades,” Mr. Hagerman said. “And I never did anything with it.”

It doesn’t have to be about Trump. The media was just as aggravating during the Obama years. But Trump is built for the 24-hour news cycle. He thrives on it and pours gasoline on the fire. He knows how to control the conversation, and revels in the attention, good or bad. As a showman, he knows there is no such thing as bad publicity.

But isn’t this how the government convinces us they are relevant? They just inject themselves into our lives by sheer force. They force their programs on us and force us to pay for them. But that’s not enough. They force “the issues” into our lives through the media, then “force” us to engage in debate, or screaming matches, with everyone who disagrees.

But who cares? Yes, these things matter. It matters that we are forced to spend half our productive time working for the government. But we can’t control the tax rates. We can control where we live, and thus which rates affect us. We can control the structure of our finances and cut the theft down a little more.

I can use cryptocurrencies as much as possible, and encourage individuals to set up their lives for maximum freedom. I can pay enough attention to try to fly above the storm. But I can’t stop the storm.

Of course, we don’t have to go to the same extreme that this man has. But it is a good idea to pay attention to things which make us happy instead of frustrated. What is all the frustration for anyway?

I understand this might come off as a bit contradictory from a news site which regularly shares the terrible things the government is doing. I hope you can take that and understand all the more why to stay out of the swamp. I feel like I can generally be informed about what propaganda is hot this week, without letting it drag me in. Sometimes I am sure I am wrong about that, and my focus is diverted to unimportant things.

Everyone has their different motivations. For me, all the bad news of government shenanigans is all the more reason to disengage and do the individualist thing.

The subject of the Times article found another passion behind his news blockade. He found an abandoned lake in the real estate listings which used to be a strip coal mine. He decided to turn the property into a park that will eventually be donated to the public.

And that is going to be a better gift to society than arguing about politics and voting for one faction over the other.

Because keep in mind that however passionate a person is about politics, they might be wrong! And maybe there is no right when it comes to elections and “civic duties.”

But he didn’t. He just went ahead and decided to take the project on himself.

We could all do that. Instead of wasting time, money, and energy engaging in the political mess, we can go do our thing and make a bigger impact. Feed the hungry, develop technology, farm your land, buy good products–whatever it is that you are passionate about.

A better society will be built by individuals engaging in what they can control, and letting go of what they cannot.