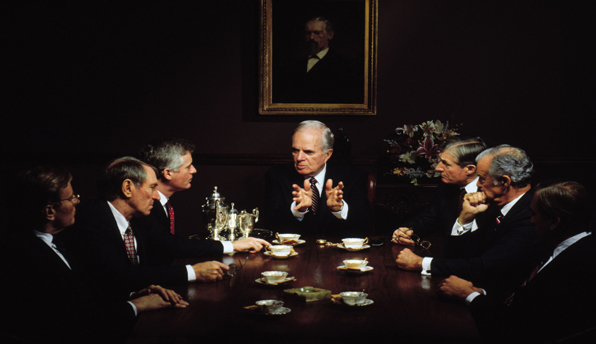 STAFF NEWS & ANALYSIS
Why Big Banks LOVE Paying Fines to the U.S. Government
By The Daily Bell Staff - May 08, 2018

When Volkswagen executives found out U.S. regulations would kill one of their diesel models, they pulled some tricks. They fooled U.S. regulators by installing software which misrepresented the emissions released.

But the U.S. found out, and arrested the top executives involved.

One of them, a German citizen, was sentenced to 7 years in prison late 2017 for his role in the scandal.

That’s a pretty intense prison sentence for trying to trick regulators. The government says that society is the victim in this case, because the regulations are an attempt to keep the environment clean.

But how does the government respond when a business directly victimizes hundreds, thousands, or tens of thousands of its own customers?

Look no further than Wells Fargo to find out.

Wells Fargo has repeatedly screwed their customers, and yet not a single executive has gone to prison.

Sovereignman sums up the last few years of scandals:

Bear in mind that the ink isn’t even dry yet on the $1 billion check that Wells Fargo wrote last week as a penalty to settle its previous scandal, where they defrauded 570,000 clients in a car insurance scam.

By the bank’s own estimates, as many as 20,000 of those clients may have had their vehicles repossessed as a result of their inability to pay for the car insurance that Wells Fargo illegally stuck them with.

And speaking of vehicle repossession, in November of last year Wells Fargo came under fire for illegally repossessing vehicles that were owned by members of the military.

In October, Wells Fargo took heat from federal regulators after it was found that the bank had deliberately recommended investment products that were “highly likely to lose value. . .”

Early that month, the bank admitted that it had ‘erroneously’ charged late fees to more than 100,000 borrowers, even though the delays were the bank’s fault.

In 2016, a number of employees at various Wells Fargo branches in California were found to have sold sensitive customer information, including Social Security Numbers, to a ring of identity thieves.

And of course, in late 2016 and all throughout 2017, Wells Fargo’s notorious ‘fake account’ scandal was found to have affected millions of customers.

Wells Fargo paid $185 million in fines for the fake account fraud. They paid a billion dollars for the car insurance scam. In the last decade, Wells Fargo has been fined $11.8 billion by the U.S. government. This includes the money it cost the bank to redress the damage done to customers, and even that was lacking.

Volkswagen fines and settlements have topped $25 billion! The next highest fine paid by an automaker was $900 million. That was when 126 customers died because of a faulty GM part.

Accidentally kill a hundred people or intentionally rob your customers, and it is no big deal.

Lie to the U.S. government, and you’ve gone too far.

The fact is Volkswagen and its executives made an irresponsible move, which cost investors dearly.

But the U.S. response is draconian, especially when compared to U.S. treatment of the banking industry.

No one from Wells Fargo has gone to prison despite intentional theft from customers.

That makes it clear that this response is meant to make an example out of VW and its executives. This is what happens if you mess with the U.S. government.

On the other hand, why would the U.S. government care to make an example out of Wells Fargo?

They only screwed their customers, not the government.

Fines are a Bargain for Corrupt Banks

Wells Fargo currently brings in about $6 billion per quarter. That puts them on pace to make almost $24 billion in revenue this year.

When a government fines a bank, it is tough for outsiders to know what kind of effect that has on the bottom line. Hundreds of millions or a billion dollars sounds like a lot of money. But for many banks, it is just a drop in the bucket.

The U.S. fined Deutsche Bank $156 million after they coordinated the buying and selling of various currencies with competitors.

The bank also failed to follow some of the Dodd-Frank rules on using the bank’s own capital for certain investments. Because Deutsche Bank is government insured through FDIC, Dodd-Frank limits what kind of investments it can make.

Deutsche Bank said they were happy to settle with the Federal Reserve.

Why is Deutsche Bank happy to settle?

Because their assets are pushing $2 trillion according to Forbes. The bank brings in tens of billions of dollars each year. Under the circumstances, $156 million is a small price to pay to get the Fed off your back. Especially if you want to keep doing what you are doing.

That fine was less than one-hundredth of one percent of their balance sheet. It’s like an average American getting a $10 parking ticket.

Deutsche Bank paid over $2 billion in fines a couple years ago to settle charges that it conspired to manipulate interest rates.

That was like a $150 speeding ticket. You might slow down for a while, but does your overall behavior change? No. You’ve got places to be!

This is simply the cost of doing business. Fines meant to punish banks are small in comparison to how much money the banks make off of the misconduct.

Banks basically legally pay-off the government to say that everything has been resolved.

This is why governments are such poor regulators. They don’t care about protecting the consumers. They are more interested in making money. So consumers might assume the government is holding banks in check, but in reality, the government would lose a nice stream of revenue if banks cleaned up their acts.

The government is essentially charging a fee to look the other way, and allow banks to continue screwing their customers.