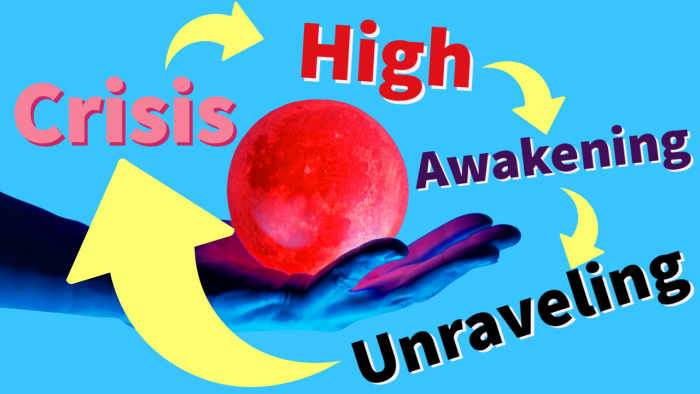 STAFF NEWS & ANALYSIS, Videos
Why I Trust Gen Z to Lead the Next Awakening
By Joe Jarvis - July 20, 2021

A 1997 book called The Fourth Turning (Amazon affiliate link) looked at American history through the lens of generations.

America goes through cycles of four, roughly 20 year long generations– with the whole cycle lasting about as long as a typical human life. The cycle follows a pattern: after a Crisis, society experiences a High, followed by an Awakening, then an Unraveling, and finally, another crisis.

1945 marked the end of World War II, a period of crisis that included the stock market crash of 1929 and Great Depression in the 1930s.

From 1965-ish began the awakening— a period when Baby Boomers started to come of age and question the status quo, led by the Silent Generation coming into their mid-life. The GI Generation– heros during the crisis period of World War II, were still in charge approaching old age, with a very militaristic, law and order style of ruling.

This period was marked by the assassinations of JFK and Martin Luther King Jr., by the hippie movement, and opposition to the Vietnam War.

Around 1985, the US entered the unraveling, where people lost trust in institutions, and the fabric of what tied America together as a nation began to come undone. It started with punk rock and the AIDs epidemic. Crime rose, the war on drugs intensified, and the President got a blow job in the oval office.

This cycle’s crisis started a little early with the September 11, 2001 attacks on the Twin Towers, and subsequent attack on our basic rights and freedoms by the US government. The crisis continued during the 2008 Global Financial Crisis and recession, and is still going strong through the pandemic and government authoritarianism of 2020 and 2021.

We can expect the crisis to escalate and reach a crescendo before 2025, after which a new high should begin. This is a time or reorganization and rebirth of society, which sets the tone for the next 80 year cycle. What exactly that high will look like depends on how we overcome the crisis.

The personality of each generation is determined by the period in which they were born or entered childhood– there is obvious a lot of overlap during transition periods. I’m including years for reference, but don’t get too hung up on specific dates of when generations begin and end.

Baby boomers were born during a high (1946-1965), which makes them a Prophet generation.

Prophets are idealists, indulged as children during the renaissance following a crisis, emerging as “self-absorbed young crusaders of an Awakening, focus on morals and principles in midlife, and emerge as elders guiding another Crisis.”

Generation X was born during an awakening (1966-1985), which makes it a Nomad generation.

Nomads are reactives, raised during an era “when young adults are passionately attacking the established institutional order… come of age as alienated, post-Awakening young adults, become pragmatic midlife leaders during a Crisis, and age into resilient post-Crisis elders.”

Baby Boomers and especially Generation X were both under-protected by their  parents during the 60s and 70s and therefore became over-protective of their Millennial, and Generation Z children in a reaction common to these cycles– a point I’ll get back to.

Millennials were born during an unraveling (1986-2005), which makes them a Hero generation.

Heroes are civic minded, self reliant, and “come of age as team-oriented young optimists during a Crisis, emerge as energetic, overly-confident mid-lifers, and age into politically powerful elders attacked by another Awakening.”

Generation Z is being born during a crisis (2006-2025), which makes it an Artist generation.

Artists are adaptive, brought up during a dangerous explosive era, marked by “aggressive institutions, and an ethic of personal sacrifice… grow up overprotected by adults preoccupied with the Crisis, come of age as the socialized and conformist young adults of a post-Crisis world, break out as process-oriented midlife leaders during an Awakening, and age into thoughtful post-Awakening elders.”

Ignoring the nice clean 20-year eras, I’d say anyone born from 2002 on is more Generation Z or Zoomer than Millennial.

Which brings me to the point of this video– Gen Z got a pretty crappy deal so far.

Essentially the very first Zoomers to graduate high school did so during a pandemic year.

Sorry, you don’t get a graduation ceremony this year, senior week, or parties. Camp is canceled kids, you can’t see your friends, you can’t even leave the house. In total of about 74 million American children, only 200 died from Covid.

That means they had a 1 in  3.7 million chance of dying from Covid over the past year.

Meanwhile, child suicide rates have been climbing, even before the pandemic. In 2018, youth had a 1 in 10,870 chance of dying from suicide.

In other words, youth suicide is a 340 times bigger killer than Covid-19.

But despite this, kids were placed on lockdown, isolated from their friends, stopped from socializing and participating in activities they loved. They were told to literally sacrifice their lives to save the old folks.

Remember, Gen Z is brought up during a time of aggressive institutions– like the CDC and state health departments to name a couple– and told to sacrifice for the greater good, while that sacrifice is very unlikely to ever be reciprocated.

We all had a year of our lives robbed by authoritarian governments, but Zoomers are in a development stage during these times of crisis. This will affect how they see the world.

Remember that reaction I talked about earlier? Gen Z is likely to rebel against their strict upbringing and elusive demands for the greater good.

They won’t be so stifling and overprotective of their kids, and they’ll usher in a mirror of the hippie movement of the 60s during the next awakening from around 2046-2065, when they’ll be in mid-life.

But instead of the protests being aimed at the dominant militaristic authorities like the Silent Generation Artists’ rebellion of the 1960s, it will be a revolt against the dominant woke-theology of the modern social justice warriors and socialists.

A recent article on Gen Z about what some psychologists are now calling “the sacrificed generation” states that Zoomers “know they will be paying higher taxes, carrying bigger personal debts and facing more uncertainty than any generation since the second world war.”

That’s a perfect analogy, because the article is talking about the Silent Generation, born during the Great Depression and World War II, then asked to sacrifice even more during Vietnam.

Like this artist generation before them, Zoomers will realize their sacrifices for the greater good were meaningless, and only actually benefitted the people in power– just like the meaningless sacrifices made during the Vietnam War.

They are ready to believe, as one respondent puts it, “the world could end tomorrow”; that civilisation could collapse; that the current system is “held together with tape and toothpicks”; that the present is as “unpredictable as it is monotonous”.

That’s why I have faith in Generation Z to lead the next awakening.

They’ll look beyond these stale, old, government, big bank, crony-corporation institutions for solutions to the issues that matter to them.

They’ll focus instead on technological innovation, and new ways to organize that are not plagued by the corruption and inefficiencies of the old institutions– from government to college.

Now, you may have noticed I’ve skipped over exactly how this crisis will play out over the next few years, and what type of order will emerge during the next high, or renaissance, from 2026-2045.

This whole video is already pretty long and dense, and sets the stage for that discussion– the type of High that the Millennial “heroes” and Gen X “nomads” will usher in after we resolve this Crisis.

This is a huge, really important topic for understanding how the world is likely to unfold over the next decade. So please hit that subscribe button, and the little notification bell, so that we can continue this discussion in upcoming videos.

For now, if you have any questions, or something to add– if you recognize world events lining up with this Fourth Turning (amazon affiliate link) theory, throw me a comment.