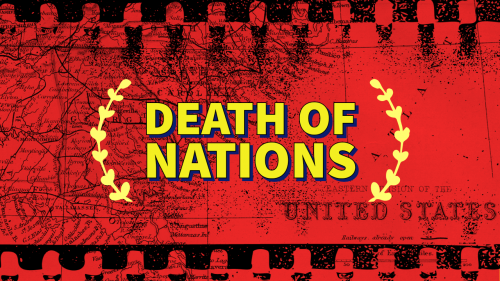 STAFF NEWS & ANALYSIS, Videos
Why Nation-States Will Die-Off in the Information Age
By Joe Jarvis - June 06, 2021

When was the fall of the Roman Empire? Was it in 410 when the Visigoths sacked Rome, or 455 when the Vandals plundered Rome? Or was it 476, when the last western Roman Emperor was deposed?

Whatever the answer, the people alive on the ground at the time surely did not wake up to a headline saying: “Rome has fallen, commence medieval barbarianism.”

It’s possible, therefore, that we are already past the date that will be considered the fall of the American Empire.

Perhaps historians will look back and say that September 11, 2001 marks the sacking of the American Empire. Not because the Twin Towers fell, but because that’s the day rule of law and due process came crashing down as well.

History may shed more light on the silent coup that occurred behind the scenes, which shifted the US governing structure to a relative dictatorship.

Yes, just like in Rome, the appearances carried on. The Senate still passed bills, and the courts still nominally gave fair trials. But the great erosion hit a turning point. From there on out, due process was not required to assassinate enemies of the US, to spy on “potential terrorists”, and even to confiscate property using civil asset forfeiture.

Or perhaps the CIA already took over as dictators in 1963 with the assassination of the last truly elected US President, John F. Kennedy.

Maybe the fall of the American Empire will be seen in terms of the destruction of the US dollar. The 1913 creation of the Federal Reserve, the 1933 debasement of the gold backed currency, and the 1971 total removal of the gold standard from the US dollar are all part of slow downfall.

These are the events which allowed the barbarians who invaded the US government to loot the treasury  culminating in this, perhaps final stage of vast money printing.

It may be more obvious, in hindsight, that the US government is currently only a shell, serving as a vehicle for barbarians to loot the corpse of a once great empire.

Some people think that the American Empire will simply be replaced by the next globally dominant superpower. And of course there are concerns that China is next in line to dominate the globe, as I discuss in another video on how China used Covid to play Western civilization.

But more likely is the death of all nation states, as we transition out of the industrial age, and into the information age.

I’m going to explain what I mean, but first a quick note– one short video will never do these concepts justice. So if you’re interested in this subject please subscribe and hit the notification bell. That way you will receive a slow drip of content like this that will help you transition smoothly into this new age, at this really exciting time to be alive.

Back to the point–  let me explain why the industrial age was characterized by large nation states.

See, the nation state is more than just a country or a government– those have existed for thousands of years. The nation state aims to bind massive numbers of people in a territory together with myths of common cause, culture, and patriotism. This allows a single government to extract much more revenue and build much bigger armies. And this large scale government rose with the industrial era, because countries required large scale armies to defend the industrial production in a given area.

The scale provided by nation states allowed industry to invest and grow in areas that were relatively safe from plunder and destruction by barbarians or rival countries. Since a factory can’t so easily pick up and move, it needs a stable environment and protection in order to make the large capital investment worth the risk. Therefore, powerful nation states attracted more industry, and thus became richer in the process. Less stable regions, with smaller governments unable to protect their capital did not become as wealthy.

But that situation is rapidly changing as wealth becomes less about material production, and more about information technology, and human capital. These things are extremely mobile, and not very susceptible to plunder. They therefore do NOT require a massive nation states to justify investments.

And for this reason, we are witnessing, in real time, the fall of the nation state. But again, when you are so close to such a major global shift, it’s hard to pinpoint exactly what is happening.

The end of the industrial age won’t be obvious, and only in the future will historians look back and try to pinpoint a day or year that the world transitioned into the age of information.

1989 is also a great year to mark the end of the industrial era because it is the year that the World Wide Web was invented, marking the beginning of all the massive changes that would come to the world through the internet, and mass communication.

Also 1989 was the year I was born, so I like to think of myself as yet another herald for the glorious death of the nation state.

We have been in the industrial era since the end of the feudal age. If we want to pick a nice clean date, we might pinpoint 1492 as the major shift, with Columbus’ exploration being an early sign of nation states competing for industrial capital.

As the Renaissance bloomed the power of the Catholic Church faded, and a new myth was required to bind the people to their governments.

But now those myths hold less and less power. People, companies, and capital are more mobile than ever, and frequently shop around for the best jurisdictions in which to live, work, and run a business.

Smaller countries and city-states are actually better positioned than nation states to take advantage of this– without the need for massive military and government spending, they can offer government services as a product, based on the actual cost.

There are already a number of signs of the transition to government as a service provider, such as Caribbean nations selling citizenship through investment, Estonia selling e-citizenship, places like the country Georgia, Panama, Portugal and so many others offering competitive tax rates to attract residents and business.

Of course it may seem like these small nations will be threatened by massive governments with huge armies that could take over, sort of like what has happened with China and Hong Kong. And this is still a threat. The dying nation state will not go out without a fight. They will fight to preserve their power in a changing world. They’ll exploit crises like pandemics and terrorism to make it seem like we still need the nation state.

But these efforts will inevitably fail, because nation states can no longer grow rich through conquest and plunder.

And competition among a hopefully growing number of countries will make it so that no government can charge more than a market rate for their services.

No more paying 50% of your income to receive some basic subpar services– the price will be based on product, with plenty of jurisdictions offering a la carte government services.

New models of governance will mean government is no longer characterized by involuntary monopolization on land and force.

Instead we will see, Free Private Cities where you sign a contract with the government, virtual governments which behave similar to insurance companies, distributed governments which do not require their citizens to all be located in the same geographic area, and so much more innovation in how societies will be governed.

That said plenty of people will be left behind by these great new forms of government, because they simply will refuse to believe that Rome has collapsed. Shells of nation-states will remain, offering the worst conditions for the price. But even these may be forced to adapt if only to compete with the new much better forms of governance.

This doesn’t mean you can simply ignore the dying nation-states– they may be more dangerous than ever at this stage. They have the capacity for violence, without much restraint.

This does pose a bit of a balancing act for the sovereign individual.

We have to at the same time make sure we do not become targets of the dying nation state’s wrath, without letting its rules hold us back from participating in the dawning of a new age.

There are still enough legal avenues to participate in the new era of humanity that we don’t have to poke the nation-state and risk our own lives and freedom.

Pay as little taxes as legally possibly, find the best jurisdiction, and diversify so you can safely weather the storm.We’re living in extremely interesting times, with the promise of individual freedom never before afforded to individuals.

Again this is a huge subject so definitely subscribe, hit the bell so you’re notified, and join my email list in case YouTube deletes me in it’s attempts to keep the nation state on life support for a little longer.

Also you might consider reading the book, The Sovereign Individual: Mastering the Transition to the Information Age, (Amazon affiliate link) on which most of this video was based. It’s really fascinating one because it’s about 20 years old and has already accurately predicted a lot, and two because it goes into a deep dive on all this information to help us understand and better navigate this changing world.