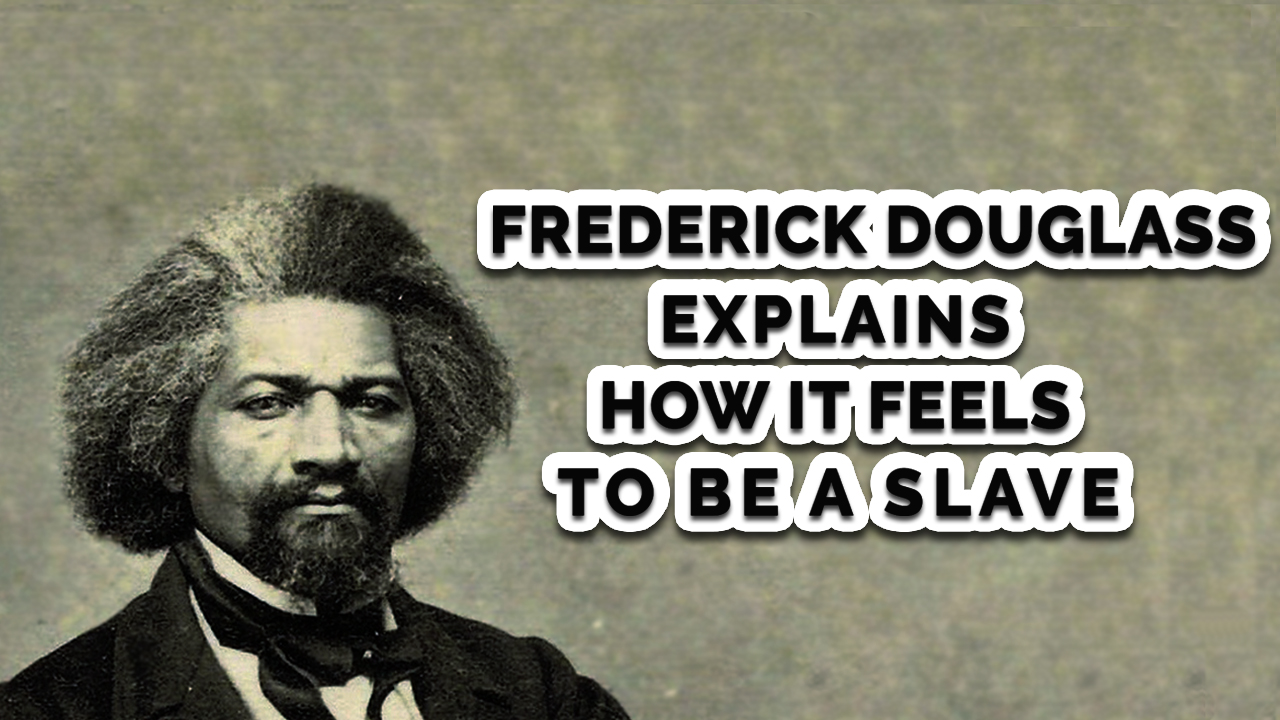 Everyone knows that slavery is when someone else owns you.

Freedom is when you own yourself.

All individual rights stem from the concept of self-ownership.

For example, the reason why consent is required for sex, is that no one gets to decide what you do with your body.

Unfortunately, we do not live in a society that respects self-ownership.

Slavery is embedded in the structure of our society, right down to the relationship between government and citizens.

Born into slavery, Frederick Douglass was in a unique position to see the parallels between outright chattel slavery, which is owning another human being outright, and other “milder” forms of slavery, where only a portion of your time, labor, and money is stolen from you by force, without your consent.

At some points, Frederick Douglass was essentially rented out by his master to work a regular job, and then forced to pay all his income to his owner.

In his 1855 book My Bondage and My Freedom, Douglass explained:

Besides, I was now getting—as I have said—a dollar and fifty cents per day. I contracted for it, worked for it, earned it, collected it; it was paid to me, and it was rightfully my own; and yet, upon every returning Saturday night, this money—my own hard earnings, every cent of it—was demanded of me, and taken from me by Master Hugh.

He did not earn it; he had no hand in earning it; why, then, should he have it? I owed him nothing. He had given me no schooling, and I had received from him only my food and raiment; and for these, my services were supposed to pay, from the first.

The right to take my earnings, was the right of the robber. He had the power to compel me to give him the fruits of my labor, and this power was his only right in the case.

Douglass draws a distinction: his master had the power to make him a slave, but certainly not the right.

Douglass then explains what allows masters to keep men enslaved.

To make a contented slave, you must make a thoughtless one. It is necessary to darken his moral and mental vision, and, as far as possible, to annihilate his power of reason. He must be able to detect no inconsistencies in slavery. The man that takes his earnings, must be able to convince him that he has a perfect right to do so.

It must not depend upon mere force; the slave must know no Higher Law than his master’s will. The whole relationship must not only demonstrate, to his mind, its necessity, but its absolute rightfulness. If there be one crevice through which a single drop can fall, it will certainly rust off the slave’s chain.

Douglass also recounted the advice he received from his master, on how to live happily as a slave.

He exhorted me to content myself, and be obedient. He told me, if I would be happy, I must lay out no plans for the future. He said, if I behaved myself properly, he would take care of me. Indeed, he advised me to complete thoughtlessness of the future, and taught me to depend solely upon him for happiness.

He seemed to see fully the pressing necessity of setting aside my intellectual nature, in order to contentment in slavery. But in spite of him, and even in spite of myself, I continued to think, and to think about the injustice of my enslavement, and the means of escape.

One arrangement in slavery was that a slave would be allowed to essentially go out and live his own life. But he would be forced to give a percentage of his income to his master. A slave was essentially renting ownership of himself.

Frederick Douglass found himself in this situation, and felt no better for it.

I could see no reason why I should, at the end of each week, pour the reward of my toil into the purse of my master…

He would, however, when I made him six dollars, sometimes give me six cents, to encourage me.

It had the opposite effect. I regarded it as a sort of admission of my right to the whole. The fact that he gave me any part of my wages was proof, to my mind, that he believed me entitled to the whole of them.

I always felt worse for having received any thing; for I feared that the giving me a few cents would ease his conscience, and make him feel himself to be a pretty honorable sort of robber.

To Douglass this arrangement was the worst of both worlds.

I was to be allowed all my time, make all contracts with those for whom I worked, and find my own employment; and, in return for this liberty, I was to pay him three dollars at the end of each week; find myself in calking tools, and in board and clothing. My board was two dollars and a half per week. This, with the wear and tear of clothing and calking tools, made my regular expenses about six dollars per week. This amount I was compelled to make up, or relinquish the privilege of hiring my time. Rain or shine, work or no work, at the end of each week the money must be forthcoming, or I must give up my privilege.

This arrangement, it will be perceived, was decidedly in my master’s favor. It relieved him of all need of looking after me. His money was sure. He received all the benefits of slaveholding without its evils; while I endured all the evils of a slave, and suffered all the care and anxiety of a freeman.

According to how much of his wages and labor were taken by his master, Douglass was 100% a slave at times, at other times 99% a slave, and even at one point 50% a slave.

He was still a slave, because he did not own himself.

But in 1838, Douglass embarked on his second attempt to escape slavery.

Frederick Douglass disguised himself a free black sailor. He boarded a train in Maryland with a sailor’s protection pass, borrowed from a free black man he knew. After a few close calls, Douglass arrived in New York. With the help of abolitionists, he found safety in New Bedford, Massachusetts, and began his life as a free man.

Don’t let the masters keep you a thoughtless slave.