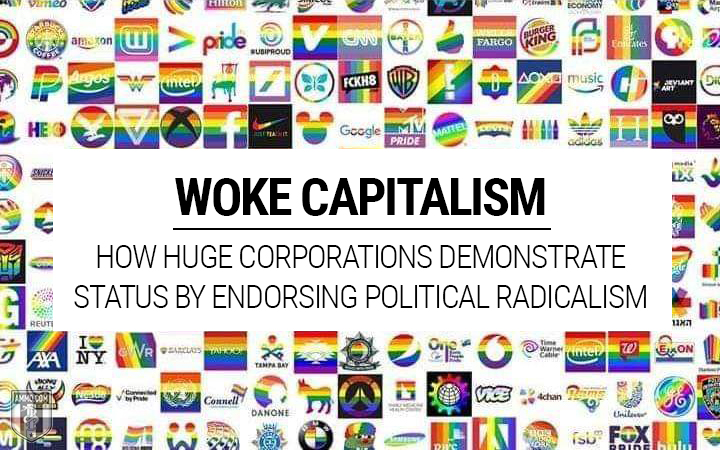 It’s a rather strange claim of the American far left that their interests are opposed to that of corporate America, because there’s virtually no evidence to support it. Quite the contrary: During the wave of Black Lives Matter rioting that took place during the early summer of 2020, American corporations marched in lockstep. Not only did they use social media to swear fealty to this political movement, but they also made massive internal changes in conformity with BLM propaganda.

It’s called “woke capitalism” and while it’s not necessarily new, it’s certainly more prevalent than it ever has been. The term itself was coined by conservative editorial writer Ross Douthat in 2018. He succinctly summed up what woke capitalism is: superficial nods toward cultural leftism that allow the company to do what it really exists to do – make money.

You might be confused or think that there’s something ironic or askew about major corporations backing supposed “rebel” ideologies. However, this stems from a very surface understanding of the topic. When we delve deeper into it, the motivation for large corporations siding with ostensibly “anti-capitalist” groups will come clearly into focus.

What is “Wokeness?”: Understanding “Critical Theory” and The Frankfurt School

Before going any further, we should spend some time defining what “wokeness” means.

Wokeness is a kind of shorthand for an area of the American political left that is obsessed with identity politics. This is, as the name would imply, the politics of identity. Thus, people are not rational actors, nor are they necessarily economic units. Rather, they are little more than a collection (or, in the parlance of this ideology, the intersections) of skin color and séxuality.

Socioeconomic class might enter into this, but if it does, it’s generally as an afterthought. While Marxism might play some influential role, the wokeists are far more likely to locate the revolutionary subject in, for example, trans-identified black men than it is the working class.

One can understand the hostility of the “woke” to the Bernie Sanders campaign in this context: it is much more revolutionary under the guidelines established by wokeism, to put more racial minorities with unusual séxual identities on the board of Lockheed-Martin and Goldman-Sachs than it is to provide for greater economic equality on behalf of their workers.

The bedrock of wokeness is not classical Marxist socialism, but something called “critical theory” and in particular its variant “critical race theory.” This has its roots in the Frankfurt School and an early 20th-century Italian philosopher and politician named Antonio Gramsci. Gramsci’s big idea was that cultural power preceded political power. Thus, to have a Marxist political revolution, one first needed a Marxist cultural revolution. This was to be accomplished by a “long march through the institutions.” What this means is that leftists were to infiltrate every institution of significance and gain power within them.

We can see the result of this idea today. While American leftists bear little, if any, resemblance to Marxists of old, they have penetrated our institutions and dominate culturally – in academia, in entertainment and increasingly in the economic sphere as well. If one were to read the Communist Manifesto, there are a series of demands at the end, most of which have come to fruition such as universal public education, a progressive income tax, a national bank, and the industrialization of agriculture.

This isn’t to say that there is a massive Gramscian conspiracy with thousands of members. Such a thing would be completely impossible to prove or disprove. However, the kernel of the idea has taken root, in part thanks to bona fide promotion in academia, and in part because it simply seems to have largely been a successful operation.

Thus “critical theory” is effectively a sociological philosophy and method that involves constant ideological attacks on Western civilization. Its guiding principle is that Western civilization is based on subjugation, dominance and tyranny. This takes many forms including “racism,” “patriarchy,” “heteronormativity” and “cisséxism” – all of which are predicated upon weaponized guilt.

Weaponized guilt is essentially taking those elements of Western and Anglo-Saxon culture, which prize even-handedness and “fair play,” and turning them against the culture itself. Indeed, the selection of the name “Black Lives Matter” is a masterstroke in weaponizing guilt: The only possible disagreement (or so say the advocates and allies of the movement) is that you don’t think black lives do actually matter. But, of course, except for extremely isolated, marginalized and numerically insignificant pockets, virtually everyone agrees that all lives have the same value. Indeed, it is a cornerstone of Western civilization and Christian teaching that this is true. It is nearly axiomatic. The Declaration of Independence declares that the basic equality of men is “self-evident.” No one would even know where to begin “arguing” this, simply because it is so accepted as a fact.

It’s worth noting that wokeness largely entered the American political vernacular after the fall of the Occupy Movement. This is not an endorsement of either the Occupy Movement specifically, nor economic reductionism and confiscatory tax redistribution schemes more generally. However, it is worth noting that the corporate affinity for a seemingly “radical” form of politics requiring nothing in the way of actual financial sacrifice began after the death of a political movement demanding corporate accountability and economic redistribution starting at the very top.

The Business Side of Things

A “conspiracy,” or however we wish to define it, is not the only reason that Wall Street loves wokeness. Beyond the misdirection, there is also a lot of money to be made catering to the woke. This has nothing to do with what “most people” in America want or need. Rather, it has to do with catering to those on the coasts and within bigger cities in the interior of our nation.

Almost all of the income growth in America over the last ten years has been concentrated in cities in Southern California, Silicon Valley and the Pacific Northwest, hotbeds of leftism in general and wokeism in particular. However, even places outside of these regions that have seen income growth tend to be far left-leaning. Examples include Austin, TX, Denver, CO and Nashville, TN.

What this means is that the larger companies in America, including the big banks in New York, the tech companies in Silicon Valley, the entertainment industry in South California and the cable news companies that cover the goings on in Washington, D.C., are all interested in chasing after the dollar of urban wokes. Increased wealth concentration, including the massive transfer of wealth that happened under the COVID-19 panic and subsequent lockdown, have made big companies increasingly the only game in town, with smaller, more responsive Main Street America businesses becoming more and more marginalized where they continue to exist at all.

It’s not that big companies think they’re too good for your money – they just know that you don’t have anywhere else to go.

The Colin Kaaepernick sneaker incident is an excellent example of woke capitalism in action. In times past, companies generally avoided wading into controversial social issues. After all, in the words of Michael Jordan, “Republicans buy shoes too.” But in an attempt to appeal to Generation Z (also known as “Zoomers”), many companies are deciding that it’s worth alienating rural and exurban flyover people in favor of courting the woke dollar.

For Nike and many other companies, this commitment to “social justice” doesn’t run much deeper than marketing. Nike knows it has a disproportionately black customer base. But only 8 percent of their vice presidents are black. What’s more, the company is notorious for using sweatshop labor in the third world to produce its expensive sneakers.

Some other quick notes on the purchasing power of the woke left: While there is certainly no direct overlap between a college education and being a radical wokeist, the woke are certainly clustered around America’s college campuses and the cities that they move to after graduation. (The average college graduate is going to earn over $1 million more than their less educated counterpart over the course of their life.)

There is also the spectre of the unmarried and the childless: these people will also have significantly greater disposable income than married couples with children living in smaller flyover cities.

All of this adds up to a very lucrative market, both for catering to the woke and pillorying the unwoke. There is no shortage of examples of either on your television during commercials.