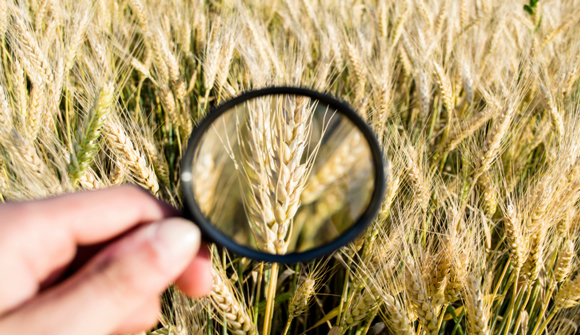 Last year, the U.S. Department of Agriculture (USDA) and the Animal and Plant Health Inspection Service (APHIS) agencies investigated the appearance of what appeared to be GE wheat on an Oregon farm, and concluded that it was an isolated incident. The investigation was closed after 'exhausting all leads,' but new GMO wheat has been detected at the Montana State University's Southern Agricultural Research Center (SARC) in Huntley, Montana, where Monsanto and researchers grew GE wheat as part of field trials from 2000 to 2003. – National Society

Free-Market Analysis: Genetically modified wheat has again been discovered in the US, but you won't read much about it in the mainstream media. The last time GM wheat was discovered in US farm fields, the domestic export market crashed and Japan issued a US wheat ban.

The meme here is that GM foods are necessary to feed the growing billions of people on planet Earth, though there is no evidence from what we can tell that mass starvation is imminent (absent economic and military interference to make it so).

The 1960s "green revolution" was at the time touted as a way to end hunger on Earth, though, in fact, its reliance on petroleum-based products and pesticides has ended up degrading soil around the world. We have no doubt that whatever companies like Monsanto produce, it likely will not be as healthy or helpful as claimed.

GM wheat is especially controversial and has not yet been approved generally for public consumption. For this reason, finding GM wheat in the food chain has economic consequences. People are suspicious; nations ban it. It's not good to find it in your fields, though this is not the first time that has happened.

… A new investigation will be opened to investigate regulatory compliance issues with the GE wheat found growing at the research facility in Montana. While this site was previously authorized for Monsanto to conduct field trials, the company is not supposed to be growing GM wheat or any other GM crop there now.

Furthermore, the GM wheat found growing there now has been genetically tested and is significantly different from the GE wheat found growing in Oregon last year. Since the original field trials granted to Monsanto, the APHIS has not deregulated any GE wheat varieties. They are not to be for sale or in commercial production in the U.S.

… Though Monsanto's initial GM wheat field tests were conducted under APHIS' regulatory approval, they have no business growing GM wheat now. This is a serious breech of compliance, and as many have suspected, Monsanto has little regard for regulatory approval for their GM crop experiments, though they often receive it through political maneuvering and illegal campaign contributions nonetheless.

… It is clear with this new Montana GM scandal that cross-breeding, the scarce but resilient GM plant that lasts after a crop has been cleared, as well as the insidious business habits of Monsanto are still threatening organic farmers' fields and the right of the U.S. public to have GMO-free food.

The takeaway here is something we already understand: Monsanto has little regard for the regulations aimed in its direction and instead, turns the law to its advantage aggressively, especially civil law. The company liberally sues farmers who harvest crops from seeds that have blown into their fields and uses corporate funds to create legislative initiatives favorable to its interests.

This process is known as mercantilism and Monsanto is very good at it. Because Monsanto is so big and aggressive, it generates legislative support for its business practices which it then parlays into commercial advantages.

Monsanto needs to do this sort of thing because there are continued, considerable questions about its products. Without its mercantilist strategies – without acquiring the threat of government force to implement its programs – Monsanto would apparently lose many of its commercial advantages.

Here's an excerpt from a NaturalNews.com article on Monsanto's genetically altered wheat, posted in 2012:

Genetically engineered wheat contains an enzyme suppressor that, when consumed by humans, could cause permanent liver failure (and death). That's the warning issued today by molecular biologist Jack Heinemann of the University of Canterbury in Australia.

Heinemann has published an eye-opening report that details this warning and calls for rigorous scientific testing on animals before this crop is ever consumed by humans. The enzyme suppressor in the wheat, he says, might also attack a human enzyme that produces glycogen. Consumers who eat genetically modified wheat would end up contaminating their bodies with this enzyme-destroying wheat, causing their own livers to be unable to produce glycogen, a hormone molecule that helps the body regulate blood sugar metabolism.

This, in turn, would lead to liver failure. "What we found is that the molecules created in this wheat, intended to silence wheat genes, can match human genes, and through ingestion, these molecules can enter human beings and potentially silence our genes," said Heinemann in a press conference on the threat of GM wheat.

Now, the above certainly seems in some ways to be speculative, but the point is that it's difficult to actually establish damages that may be produced by genetically modified crops. One would like to argue that the market itself will decide on the viability of Monsanto products, but that's not the case because of Monsanto's preference to use legislative means – and thus the threat of state force – to introduce and popularize its products.

There's certainly no outcry for the implementation of GM crops; there was never, so far as we know, a mass movement of some sort among those in the agriculture industry to find alternatives to natural crops. It's very likely that the real reason companies like Monsanto are pursuing GM crops is because they can be patented and owned.

This is the Western model of big business, and one that applies to the products of pharmaceutical corporations, as well. These corporations find natural palliatives and then create chemical counterparts that they can patent and sell. Monsanto intends to create patented food solutions.

In part because of the aggressiveness of Monsanto and other companies such as Cargill, a countertrend has emerged in the "organic farming" movement. Unlike Monsanto's corporatization of farming, the organic farming movement seems to be "grassroots." It has sprung up because people are increasingly suspicious of Big Agriculture and the questionable products that are being produced and disseminated.

The organic farming movement seems to be a populist reaction to Western government's increased control over food and farming – and as such, it has attracted a good deal of investor attention. A Forbes article posted in late September and entitled "Dirt Cheap? Investors Are Plowing Into Farmland, Here's Why" updated the trend.

Here's a phrase you don't hear so often: multimillionaire farmers. If you've read my column, you know that I often try to shine some light on whatever "alternative" or esoteric investment has captured the attention of wealthy families and institutions. Well, hold on to your straw hats, because one of the most interesting investments to catch their fancy recently is farmland.

The best indexes of land values come from Iowa, which has nearly 31 million acres of farmland. In April an outfit called the Iowa Farm & Land Chapter #2 Realtors Land Institute (chew on that mouthful) said its survey of local farmland brokers put the average price of the highest-quality farmland there at $11,674 per acre.

Even the midgrade dirt was fetching $8,300 per acre. While those prices were down 5 percent or so from a year earlier, they are still way, way up over the long run. In the late 1990s you could buy midgrade farmland for less than $1,700 per acre.

Iowa State University also provides a good survey of land values. It reports that a landowner who bought in 2000 and sold last year would have earned a 12.6 percent annualized return on his investment — and that is not including the proceeds from farming the land or leasing it out to a farmer.

Yep: Farmland has solidly beaten the stock market since the late 1990s. So there are many millionaire farmers around Iowa. After all, the average size of a farm there is 333 acres, meaning the average Iowa farmer tilling his own high-grade soil has an asset worth $4 million. So the next time you pass through Waterloo or Story City, show the guys in overalls some respect, even if they're not carrying pitchforks.

To be sure, it's not the farmers themselves who are driving the boom in prices. As I mentioned, it's the money pouring in from outside investors. The smart money wants to own hard assets that are critical to the maintenance of advanced industrial civilization. Among these core assets necessary for human life is, obviously, the production of food.

Huge institutional investors ranging from sovereign wealth funds to university endowments to the Mormon church have been heavily investing in farmland not only in the United States but around the world (particularly in Africa and South America) for a while now. So, if you believe in following the smart money, farmland must be a solid investment.

This last paragraph is noteworthy because the organic farming trend – and farmland as an investment generally – is not just a domestic US trend but is an expanding investment opportunity around the world.

In a sense, here as elsewhere we find what we call a VESTS paradigm at work. Globalist forces are obviously supporting the expansion of patentable GM foods and these activities are expanding worldwide. At the same time, the evolution of an organic foods movement has provided a direct countertrend.

Both sides have specific commercial and investment advantages and chances are that at least in the short- to mid-term, neither side will "win." Of course, here at The Daily Bell we know where we stand, having decided that we are more comfortable with industry trends that undercut elite dominant social themes. We're not comfortable, for instance, with investments that support the increasingly globalized, Western military-industrial complex.

And so we wouldn't be comfortable investing in GM-specific corporate initiatives. But certainly organic farming offers an investment that can provide growth within a positive context. Wholesome food grown within a context of family or community farming is a great trend that allows people to take control of their foodstuffs once more. Predictably, you find government resistance to this trend.

Forbes seems positive about this trend, as well, though the article points out the explosive growth in farming generally might lead one to believe that this is a better time to sit on the proverbial sidelines than to enter into extensive positions.

We're not sure we agree with this perspective, certainly not in the long term. The world will continue to need vast amounts of food, obviously, and presumably people will increasingly prefer healthy food over food that is adulterated and subject to GM manipulation.

We'll bet on organic farming. As a trend, it seems a "keeper."