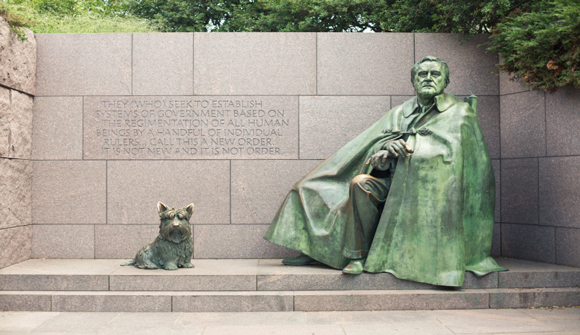 Here's a new dominant social theme: US presidents are good and they ought to be in movies.

Of course, it helps if you are a socialist leader and make maximum use of the awesome power of Leviathan. The two presidents currently being lionized – surprise, surprise – are Franklin Delano Roosevelt and Abraham Lincoln.

Roosevelt presided over the initial, massive expansion of the welfare state – the same one that has brought the US some US$200 trillion in payables and will eventually spell the end of the US as a going concern. Lincoln paved the way for the activist leader Roosevelt by insisting that the Union was indivisible and doing his part to murder or otherwise maim about a million people to prove it.

The movies that portray these leaders don't provide us with this stark – if historically realistic – point of view, of course. The bloody-minded decisions and subsequent ramifications are presented as historical necessity.

These are sympathetic portrayals and it is hard not to come to the conclusion that once again Hollywood is sending us a message about the Way the World Works, and US power politics especially. More on that in a moment.

Presumably, we are to walk away from these movies believing US presidents are bold visionaries who are willing to move their often warlike policies forward for the "greater good." And there is certainly an audience for this sort of perspective. Steven Spielberg's "Lincoln" was just released and has already taken in more than US$13 million.

There is another movie out there on Lincoln that attracted a good deal of attention, as it featured Lincoln as a vampire killer. This isn't strictly speaking a biopic but it is surely a kind of hagiography.

Two movies about Franklin Delano Roosevelt are currently being distributed. The one that hasn't got much attention is called "FDR, American Badass." It is described by Wikipedia as "a slapstick comedy that has the 32nd President of the United States riding a 'wheelchair of death' to stop the world from werewolves who carry the polio virus, including werewolf versions of Hitler, Mussolini, and Emperor Hirohito."

The "important" FDR film – just released – is called "Hyde Park on Hudson." It's about a social event hosted by President Franklin Delano Roosevelt (at his country home) for the King and Queen of England. The tension of the movie is in part derived from the mission of the Royals, who seek support for the war against Germany that had just started.

The movie seeks to portray FDR as a sly and charming mastermind who understands that the Royals need to be humanized if they are to win over the US populace. By feeding them hot dogs and otherwise presenting the weekend with the Royals as an informal event, Roosevelt presented the King and Queen of England as "just folks" who needed help facing the juggernaut of the German military machine.

The result, the movie implies, was the initial turning point in what was to become World War II. An incident little-noted by historians, this weekend of entertainment provided by FDR would generate enough US public sympathy for England to allow Roosevelt to begin the process of entering the war on England's side.

Of course, Roosevelt's masterful public relations manipulation was aided by the same media that protected his image by refusing to photograph or otherwise portray him below the waist throughout his three terms. Roosevelt was paralyzed as the result of what was once considered the effects of polio but is now thought to have been Guillain-Barré syndrome.

The media was also complicit in covering up Roosevelt's extramarital dalliances as well as his wife's apparent Sapphic ones. One of the titillating aspects of "Hyde Park on Hudson" is centered around Roosevelt's complicated sex life and many mistresses.

Roosevelt is played by the famous comic actor Bill Murray and "Hyde Park on Hudson" is supposed to do for FDR what he intended to do for the King and Queen of England – humanize them and introduce them to a US audience that did not have a great deal of familiarity with them. The New York Post's Lou Lumenick reviewed the movie sympathetically as follows:

Half as long and twice as much fun as the self-important "Lincoln,' Roger Michell's charming sex-and-politics comedy "Hyde Park on Hudson' is basically a frothy tabloid take on presidential history. And for my money, that's a good thing in a season filled with puffed-up prestige pictures.

Anchored by a thoroughly delightful performance by Bill Murray, the film shows President Franklin D. Roosevelt wrestling with two problems as World War II looms in the spring of 1939.

History tells us this was one of the biggest public relations coups of FDR's career, convincing the American people that the English were "like us' and deserving of support when World War II erupted just two months later.

The big problem with this review is that its premise is faulty. Today, we know that much of Hitler's military buildup and indeed his rise to power was supported by same Western financial forces that are today pursuing "the war on terror" and apparently for much the same reasons.

Thanks to what we call the Internet Reformation, we can see the scope of history more fully. The information is finally available. It seems to show us that the real reason both the first and second world wars were fought was in part to generate global governance, a process that remains underway today.

And we can see that after every large war, the West lost considerable freedoms. Under Lincoln, the free press was suspended, politicians and journalists who opposed the war were jailed. The result of an exceptionally bloody war was that states could not secede without facing military retaliation. History shows us that once a regime is emplaced by force, empire (of a sort) is inevitable and then, eventually, a downfall.

This is certainly the process that is underway in the US – and Europe, too, where an EU empire is a-building … and tottering. The two US presidents most responsible for the current US empire are Lincoln and Roosevelt. (One could make a case for Woodrow Wilson, as well, but he was not as charismatic, it would seem.)

As students of elite dominant social themes, we long ago came to the conclusion that social and media trends are often deliberate rather than coincidental. The spate of movies portraying activist and warlike US presidents in a sympathetic light may well be intended to set a certain tone.

If so, this is a disturbing supposition. It would seem to be indicating that something is to unfold in President Barack Obama's second term that may replicate some of the same sort of events that took place under FDR and Lincoln.

What those events are to be is not yet clear. But it is a most disturbing supposition.