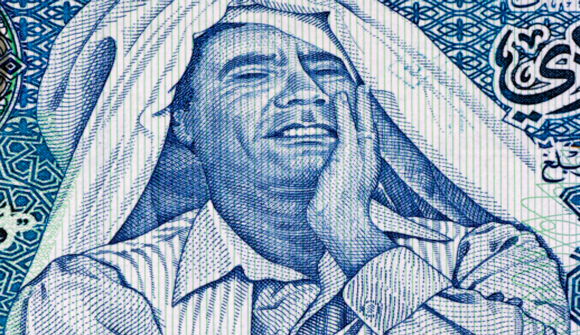 Plans for attacking Muammar Gaddafi apparently go back some 20 years, and even US President Ronald Reagan tried to kill him, deeming him a threat to America power. The latest attacks are in keeping with the larger wave of aggression initiated by the Anglo-American power elite that is on to the next stage of its implementation of the "new world order."

This power elite, based mostly in the one-square mile City of London, is said to seek world domination if it can get it – and sooner rather than later in the face of a growing Internet Reformation.

But there may be another reason for the Libyan attacks that explain their timing. According to a Russia Today news story, for which I was interviewed, Gaddafi was planning to introduce a gold dinar – "a single African currency made from gold, a true sharing of the wealth."

The idea, according to Gaddafi, was that African and Muslim nations would join together to create this new currency and would use it to purchase oil and other resources in exclusion of the dollar and other currencies. RT calls it "an idea that would shift the economic balance of the world."

It was not a democratic perspective in the sense that a country's wealth would revolve around gold and its population. But that's how modern money works. The current dollar reserve system benefits the US. In Gaddafi's case, as he held some 144 tons of gold against a fairly small population, a gold dinar would prove a most powerful currency.

When I was interviewed by RT, I said the following: "If Gaddafi had an intent to try to re-price his oil or whatever else the country was selling on the global market and accept something else as a currency or maybe launch a gold dinar currency, any move such as that would certainly not be welcomed by the power elite today, who are responsible for controlling the world's central banks. … So yes, that would certainly be something that would cause his immediate dismissal and the need for other reasons to be brought forward from moving him from power."

There are many who believe Iraq's Saddam Hussein's overthrow by the US was sealed when he announced Iraqi oil would be traded in euros, not dollars. Sanctions and then a US invasion followed. Coincidence? Hussein's idea would have strengthened the euro, but Gaddafi's idea would have strengthened all of Africa in the opinion of hard-money economists. Gold is the ultimate honest money and the peg against which all other fiat currencies are ultimately devalued.

Pricing oil in something other than the dollar would attack the basis of US power in the world. The dollar is the reserve currency based on a deal made with the Saudis back in 1971 in which the Saudis as the world's largest oil producer agreed to accept only dollars for oil. RT concludes: "A change in this policy its NATO allies literally could not afford to let that happen."

The central banking Ponzi scheme requires an ever-increasing base of demand and the immediate silencing of those who would threaten its existence. Perhaps that is what the hurry is in removing Gaddafi in particular and those who might have been sympathetic to his monetary idea.