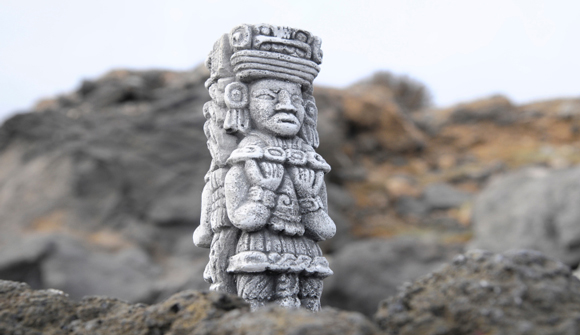 Here we go again. Global warming is suddenly back in the news and I think I know why. But before I discuss that, let's take a look at the latest grim findings.

Once more we're reading about the terrible toll that global warming can take. In this case, we're being led to understand that it may have resulted in the demise of a great, ancient civilization and also the reduction in size of various noble mammals.

Civilization first. According to hundreds of articles now clogging the Internet, scientists in Britain believe that a lack of rainfall may have doomed the great Mayan civilization.

This "speculation" is based on the idea that rainfall in areas of Mayan habitat declined for as long as a decade at a time. The scientists published their findings in the Feb. 24 issue of the journal Science.

FoxNews/LiveScience quotes the lead researcher himself. "'Our results show rather modest rainfall reductions between times when the Classic Maya civilization flourished and its collapse between 800 to 950,' said Eelco Rohling, a paleoclimatologist at the University of Southampton in England.

"These reductions amount to only 25 to 40 percent in annual rainfall, but they were large enough for evaporation to become dominant over rainfall, and open water availability was rapidly reduced. The data suggest that the main cause was a decrease in summer storm activity."

According to Rholing, even modest reductions in rainfall may have toppled the Mayans if the rainfall occurred in the summer when the Mayans planted and harvested.

What does the article conclude? "The collapse of the ancient Mayan civilization may have been linked to relatively modest dry spells, researchers now say."

According to the story, "Scientists have long drawn connections between the slow decline of the ancient Maya, which took about two centuries, 'to climate change, and especially to drought,' said researcher Martín Medina-Elizalde at the Yucatan Center for Scientific Research in Mexico."

OK, so climate change (global warming) caused the end of a wonderful civilization. But worse is to come. Climate change apparently shrinks mammals, including humans.

According to another spate of articles hitting the Internet, humans may miniaturize as a result of global warming.

Here's something from the Christian Science Monitor on the syndrome: "It's been long known that the Earth's rising surface temperatures portend mass extinction, prolonged droughts, extreme weather, and rising seas. Now we can add a new worry: Humanity could be transformed into a race of hobbits."

The article tells us that Sifrhippus sandrae, "the earliest known horse," was about the size of a small dog but actually got even smaller during a time when the globe was warming, about 56 million years ago. The decline in stature lasted about 130,000 years and then, when the planet began to cool, the size of the horses "shot back up" over the next 45,000 years. Here's some more from the article:

The researchers ruled out atmospheric pressure and aridity, and the animal's diet, and concluded that temperature was causing the species' rapid shrinkage and growth. "This, for the first time, tells us that temperature is what's driving the body size evolution for these horses," said the University of Florida's Jonathan Bloch, who co-authored the study, in an interview with LiveScience.

These findings, which were published Thursday in the journal Science, are consistent with Bergmann's rule, an ecological principle, first proposed by German naturalist Christian Bergmann in 1847, that animals of a given species tend to be smaller in hotter climates. Bergmann's rule holds for about three-quarters of all mammals. But does that include us? Anthropologists have found that Arctic populations such as the Inuit, Aleut, and Sami peoples, tend, on average, to be heavier than people living closer to the equator. But there are many exceptions to this tendency.

The article about the Mayans is a speculative one. The researchers involved make the case that "modest" reductions in rainfall may have ruined Mayan civilization. But here at the Daily Bell, we've generally become fairly skeptical of these sorts of reports. Scientists, it seems, are constantly trying to explain the demise of "great" civilizations based on disasters that have a specifically modern character.

Of course, these civilizations weren't so great after all. The "empire" phase of civilization may actually spell the END of a vibrant civilization. Scientists are constantly bemoaning the fate of such civilizations when the violent, bloody, expansionary phase is an expression of a particular culture's "last gasp." We've written about that many times. You can see one such article here: Mayan Worship.

The reports about equestrian shrinkage are new to me, but no less suspect. Notice, please, the incredible specificity with which these results are presented. The timeline is exact even though one has to travel back over 50 million years to make the appropriate connections. Now, you may believe in the reports of these "experts," but I'm personally skeptical of articles that track events that are tens of millions of years old with such exactitude.

So if there are considerable reasons to doubt these two reports that have appeared back to back in the journal Science, why might they have been presented now?

Well … here at The Daily Bell, we track the dominant social themes of the elites. These elites are, in our view, trying to create world government and regularly attempt to frighten Western middle classes into giving up power and wealth to globalist institutions like the UN.

Global warming is an almost textbook case of one such dominant social theme, and I'd argue these reports fit right into the larger pattern we attempt to analyze. The idea is to both criminalize and monetize energy to gain greater control over Western sociopolitical and economic facilities.

"Climate change" is likely one of their latest and most important methodologies. It's also a failing one. It's been exposed time and again via failed models being used to establish the phenomenon. Then there are the many emails that evidently show a small group of committed climatologists have conspired to create phony evidence of warming.

It may be, of course, that the globe is (somehow) warming, though that surely doesn't seem established to me. But the idea that humans' tiny contribution to the carbon dioxide in the air is the contributing factor to any potential rise in temperature is simply adding one speculation to another.

It is something to try to reshape human behavior around – at great cost. That doesn't stop the elites from trying, of course. There are already "climate exchanges" in Europe and Africa and the top-end cars of prestigious manufacturers like Mercedes and BMW are turning out autos that supposedly produce little or no carbon dioxide.

I'd also note that these two reports are fairly conveniently timed to buttress the recent outcome of a South African (UN) conference on global warming. Here's an excerpt of a report on the Durban affair I found at Townhall.com. It's written by attorney, Shannon Goessling:

The world community stepped away from the United Nations Climate Change Conference in Durban, South Africa two short months ago with promises that all nations will submit to the climate control supremacy of the UN – by 2020.

In the interim, developed (i.e., Western) countries will be required to pay into a $100 billion a year Green Climate Fund – run by the UN – ostensibly to help offset the "costs" to countries affected by climate change. More ominously, a Climate Court of Justice is to be established to oversee and enforce the new emissions mandates.

When in doubt … follow the money. About US$100 billion is now at stake along with a radical expansion in UN power. The meme itself seems to hang in the balance. I'd argue, therefore, these two articles appearing NOW are no coincidence. I expect more such reports.

What we here at the Daily Bell call the Internet Reformation has done us a great service when it comes to elite themes. Not only can we track their creation and dissemination, we can see the timing as well.

Now, one can argue that none of these observations are credible and that it is all "coincidence." But what cannot be argued is that there are only a handful of major media firms now – perhaps five in all of the US.

Track the ownership and I'm fairly sure you'll find the same handful of names over and over again. The power at the top of the West is fairly incestuously distributed. How could it be otherwise? The top elite families apparently control hundreds of TRILLIONS of dollars via their grip over central banking.

And while 100 years ago there were almost NO central banks, today there are 150 and the BIS to supervise them. How did that happen? And who supervises the BIS? I think I know.

Global warming, in my view, is just another tool the elites are trying to use to consolidate yet more power and wealth over the rest of us. This is one of the reasons I'm suspicious of these articles and their timing. Promotion … or professional research? Or both. You decide.