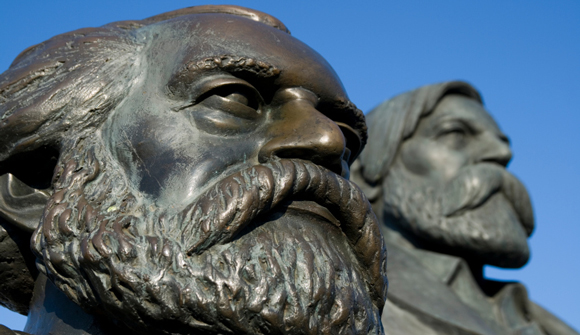 EDITORIAL
Barack Obama and the Meaning of Socialism
By Richard Ebeling - December 24, 2013

Barack Obama is finishing his fifth year as president, and continues to try to move America further in the direction of increased government paternalism with the implementation of ObamaCare, a push for a higher minimum wage, more intrusive business regulation, a drive for higher taxes to redistribute wealth and a persistent insistence that individuals must sacrifice their own interests for that of "society."

Nothing that Obama has advocated or had legislated by Congress or commanded through executive order should have come as a surprise. He was very straightforward about his conception of "change" long before he was even thought of as a contender for the White House.

For example, way back in September of 2001 when he was an Illinois State Senator, in an interview with Chicago public radio station WBEZ, he was asked about the achievements and challenges of the Civil Rights Movement in America.

Obama said that the Supreme Court had focused on "court-imposed remedies regarding segregation and voting rights." But, he went on, "the Supreme Court never ventured into the issues of redistribution of wealth and sort of more basic issues of political and economic justice in society."

The Supreme Court, Obama went on, "didn't break free from the essential constraints that were placed by the Founding Fathers in the Constitution, at least as it has been interpreted." And, thus, the Court "wasn't that radical."

At the same time, the Civil Rights Movement never "put together the actual coalitions of power through which you bring about redistributive change."

It was clear that Obama thought that the next "progressive" phase of "change" for America needed to be precisely in the direction of greater "distributive justice." And that, of course, required an increasingly more intrusive hand of government in the economic, financial and personal affairs of the citizenry.

Why the difference? Because in the eyes of socialists and communists Western democracies were not really "free." They argued that what prevailed in the West were false "bourgeois freedoms" – freedom of speech and press, freedom of religion, freedom of assembly and association, freedom to vote and elect people to political office and freedom to own and use private property.

"Real freedom," socialists said, could only come with the end of capitalism and its system of profit-based exploitation of the workers by greedy, self-interested capitalists. The democratic systems of the West were merely political shams used to dupe the masses into a "false consciousness" to passively accept their oppression by the ruling capitalist class.

Only under socialism and communism would "the workers" – the broad masses of the population – have that "true freedom" through the common ownership of the means of production and through redistribution of wealth from the immoral and unjust hands of "the rich" to the deserving and needy toiling laborers and the poor.

True democracies were "People's Democracies" and "People's Republics" where the economy was controlled by the government – in the name of the people and for their benefit, of course – and redistributive justice ("social justice") assured that each received what they "rightly" deserved.

From Socialist Planning to the Welfare State

In the post-World War II period, socialists in Western Europe were forced, slowly but surely, to give up on the ideal of government direct ownership and central planning of industry and agriculture. Socialism's economic inefficiencies and experienced political abuse, corruption and brutal tyranny as witnessed in the Soviet bloc countries became too clear to too many people in Western society for it to remain a shining ideal for Western socialists to espouse.

What the Social Democrats in Western Europe retreated to was the interventionist-welfare state. To have "social justice," they argued, it was not necessary for the government to fully nationalize industry and all other economic activity. It is sufficient for the government to "tame" capitalism through a spider's web of controls, regulations and commands, and to use the tax system to redistribute wealth from the rich to the poor and the deserving middle class, and to establish a network of "social safety nets" such as social security, national health care, public housing and state subsidization of all education.

This is basically the ideal that Barack Obama, from all his public statements, clearly has long believed in and wanted to see expanded beyond the extent to which they are already practiced in America. Thus, he wants to use the tax system to "spread the wealth" and apply the regulatory powers of the government to more forcefully manage and direct the economic affairs of the citizenry – all for a particular interpretation of the "common good," of course.

Obama's criticism of the Supreme Court in 2001 goes back to the fact that the Constitution of the United States was designed to secure people in their individual rights to life, liberty and honestly acquired property. It was not designed to micromanage the population's personal, social and economic affairs, and redistribute wealth from some who are designated "the rich" to others labeled "the poor."

So is Barack Obama a "socialist"? In November of 2013, while on a three-day campaign trip to raise money for Democratic Party candidates, the president said that he was "not a particularly ideological person," but that he was passionate about his "values" and "practical" about how to achieve them.

But what are those "values" that arouse his "passion" for the achievement of which he is willing to be "practical"? In July 2013, Obama said in a speech, "If you were successful, somebody along the line gave you some help… If you've got a business, you didn't build that. Somebody else made that happen."

Underlying this statement is a fundamental belief that all that the individual might achieve and enjoy is due not to his own creative ability or determination and work, but to the efforts of the others in the "collective" to which he belongs. He therefore owes everything to "the group" and thus, any wealth and material comfort that he might enjoy is really a "debt" that he owes to all those others in the society in which he lives.

The idea that an individual has "earned" that wealth and material comfort as a result of his own mind and efforts is an illusion, and if he is allowed to have any of that wealth or material well-being he should accept the fact that it is only at the "pleasure" of the collective others in society.

Hence, every successful businessman and entrepreneur should realize that all that he claims to be his own is really "unearned income" – a category even embedded in the tax code.

Here, again, is the ghost of Karl Marx who defined "productive labor" as the material output resulting from the physical effects of "the workers." The businessman was an "exploiter" who demanded a portion of the workers' output as the "price" for letting them use the machines and tools in the factory that he unjustly declared to be his private property.

Thus, the businessman "did not build it." The workers did. And his profits, rent and dividends are a measure of the degree to which he has "exploited" and "stolen" from the real producers, "the workers" on the shop floor.

Denying the Creative Mind Behind All that is Built

From whose accumulated savings came the resources to build the factory or business, and to pay the workers their salaries until the work was done and a product was ready for sale? From whose creative mind and imagination came the idea of how to build it, and for the manufacturing of what goods to satisfy the demands of others in society in their role as consumers? From whose entrepreneurial spirit came the willingness and character to bear the uncertainty of whether a profit might be earned or a loss suffered in the competition of the market place?

These questions were irrelevant to Karl Marx and seem to be equally unimportant to Barack Obama. The only thing that matters is to find the "practical" political means to tax and regulate the capitalist creators so to fulfill those "values" of redistribution and the equalizing of outcomes. After all, in Obama's eyes it really does not belong to those from whom it is taken.

This is the false and insidious idea: that the individual is really nothing and the collective everything, and that the creative mind that imagines what might be done is less important than the physical work that reflects the implementation of the creative idea.

This is the idea behind the socialist conception of man, society and government. And it is the basis of the "values" that guide the policies and "practical" politics of the current occupant of the White House.