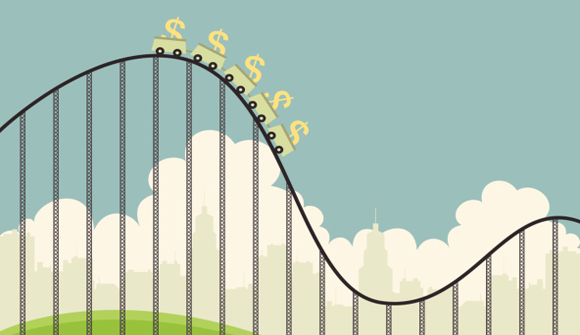 EDITORIAL
Ludwig von Mises and the Austrian Theory of Inflations and Recessions
By Richard Ebeling - October 21, 2014

Eighty years ago, in the autumn of 1934, there appeared in English one of the most important books on money and inflation penned in the twentieth century, The Theory of Money and Credit by the Austrian economist, Ludwig von Mises. Even eight decades later, it still offers the clearest analysis and understanding of booms and busts, inflations and depressions.

Mises insisted that the economic rollercoaster of the business cycle was not caused by any inherent weaknesses or contradictions within the free market capitalist system. Rather, inflationary booms followed by the bust of economic depression or recession had its origin in the control and mismanagement by governments of the monetary and banking system.

Mises the Man and Economist

Mises was born in Lemberg (now Lvov, Ukraine) in the old Austro-Hungarian Empire on September 29, 1881. He attended the University of Vienna and earned a doctoral degree in jurisprudence in 1906, with an emphasis on economics. He made his living, however, not in academia but in the world of public policy, in the role of senior economic analyst for the Vienna Chamber of Commerce, Crafts, and Industry, a position he held from 1909 until 1934.

In the Austria between the two world wars he was a leading figure in bringing the Great Austrian Inflation to a halt and assisted in reorganizing the Austrian National Bank on a non-inflationary, gold-backed basis. He was an influential voice in preventing the Austrian socialists from nationalizing commerce and industry and was in charge of a department of the League of Nations' Reparations Commission in Austria in the early 1920s.

Mises also founded the Austrian Institute for Business Cycle Research, taught a highly acclaimed seminar each term at the University of Vienna, was the Austrian representative of the European Free Trade Association and led a world-renowned private seminar for Austrian and visiting scholars at his office at the Chamber of Commerce.

After spending several years teaching in Geneva, Switzerland in the second half of the 1930s, Mises moved to the United States in 1940. He taught for nearly a quarter of a century at New York University before retiring, and passed away on October 10, 1973 at the age of 92.

His international recognition and reputation during his years in Europe and the United States was the result of his profoundly important contributions to economics and social philosophy that began when he first developed what became known as the Austrian theory of money and the business cycle in The Theory of Money and Credit (1912), which appeared in English eighty years ago, in 1934, in a revised edition.

Money Emerges from Markets, Not Government

Building on the earlier work of Carl Menger, the founder of the Austrian School of Economics, Mises demonstrated that money is not the creature or the creation of the State. Money is a market-based and market-generated social institution that spontaneously emerges out of the interactions of people attempting to overcome the hindrances and difficulties of direct barter exchange.

People discover that certain commodities possess combinations of useful qualities and characteristics that make them more marketable than others, and therefore more easily traded away for various goods that someone might wish to acquire in exchange with potential trading partners.

Historically, gold and silver were found through time to have those attributes most desirable for use as a medium of exchange to facilitate the ever-growing network of complex market transactions that enabled the development of an ever-more productive system of division of labor.

Money and the Savings-Investment Process

Willing investors can borrow from willing savers sums of money set aside out of earned income to then use to purchase and hire various quantities of productive resources – including capital equipment, workers for hire and useful resources and raw materials – to employ them in production activities that will finally result in potentially marketable and profitable finished consumer goods at some point in the future.

Out of earned revenues from such sales, the investor pays back the borrowed savings with any agreed-upon interest payment, which reflects the time preference of the savers for having been willing to defer the use of a part of their own income for the period of time covered by the loan.

Under a commodity monetary system such as a market-based gold standard, there is a fairly close and closed connection between income earned and consumer spending, and savings set aside and savings borrowed for investment purposes.

Suppose that $1,000 represents the money income earned by people during a given period of time. And suppose that these income earners decide to spend $750 on desired consumer goods and to save the remaining $250 of their earned income.

That $250 of saved income can be lent out at interest to those wishing to undertake future-oriented investment projects. The real resources – capital, labor services, raw materials – that the $250 of purchasing power represents are transferred from the savers to the investors. The remaining real resources of the society represented by the $750 of buying power that income earners choose to spend in the present are directed to the manufacture and marketing of more immediately available consumer goods.

Thus, the scarce and valuable resources of the society are effectively coordinated between their two general uses – producing goods closer to the present (such as a currently existing oven being combined with labor and raw materials to bake the daily bread that people wish to consume), or being used to manufacture goods that will be available and of use at some point later in time (such as the production of new ovens to replace the existing ones that eventually wear out or to add to the number of existing ovens so bread production can be increased in the future).

Like all other prices on the market, the rates of interest on loans coordinate the choices of savers with the decisions of borrowers so to keep supplies in balance with demands for either consumer goods or future-oriented investment goods.

In principle, there is nothing to suggest that within the free market economy, itself, there are forces likely to bring about imbalance or discoordination between the choices and decisions of those trading in the marketplace, either for consumer goods in the present, or for savings in the present in exchange for more and better goods in the future through informed and successful investment by profit-oriented entrepreneurs.

Central Banks as the Cause of the Business Cycle

But what Ludwig von Mises showed in The Theory of Money and Credit and then in even greater detail in his master work, Human Action, a Treatise on Economics (1949), was how the harmony and coordination of the competitive, free market can be thrown out of balance through the monetary central planning of governments and central banks.

First under a weakened gold standard and then under systems of purely government-controlled paper monies, central banks have the ability to create the illusion that there is more savings available in the economy to sustain investment-oriented uses of scarce resources in the society than is actually the case.

For example, in the United States, the Federal Reserve (America's central bank) has the authority and power to buy up government securities and other "assets" such as mortgaged-backed securities, and pay for them by creating money "out of thin air" that then adds to the loanable funds available to the banking system for lending purposes.

People may be still consuming and saving in the same proportions out of their earned income as they have in the past, but now financial institutions have artificially created bank credit to offer to potential borrowers, and at below what would otherwise be market-generated rates of interest to make investment borrowing more attractive to undertake.

To use our previous example, suppose that people are still spending $750 of their $1,000 of earn income on desired consumer goods and saving the remaining $250. But suppose that the central bank has increased available loanable funds in the banking system by an additional $250.

Investment borrowers, attracted by the lower rates of interest, borrow a total of $500 from banks – $250 of "real savings" and $250 of artificially created credit. They attempt to draw $500 worth of the society's scarce and real resources into future-oriented investment activities that would not increase output in the economy until sometime later.

But income earners are still spending $750 of their originally earned income on desired consumer goods. This results in the limited and scarce capital, labor and raw materials in the society being "pulled" in two incompatible directions at once – into the manufacture of $750 worth of consumer goods and $500 worth of investment goods, when to begin with there were only $1,000 worth of such real and scarce means of production.

Price Inflation and Misdirection of Resources

This will inevitably tend to push up prices in general in the economy above where they would otherwise have been if not for the central bank's expansion of the money supply in the initial form of new bank credit, as consumers and investors bid against each other to attract into their direction the goods and services they, respectively, are attempting to buy. Thus, such monetary manipulation always carries the seed of future price inflation within it.

At the same time, Mises argued, the fact that the newly created money first enters the economy through the banking system through investment loans brings about a malinvestment of capital and misallocation of labor and other resources as investment borrowers attempt to employ (as in our example) the equivalent of fifty percent of the society's resources into future-oriented investment activities ($500), while income earners wish only to save the equivalent of twenty-five percent of their income ($250).

Even though price inflation will push up the dollar amount of money income earned, the unsustainable imbalance between savings and investment brought about by central bank monetary policy will be reflected in any discoordination between the percentage amount of income (and the real resources they represent) that people wish to set aside for purposes of savings and the amount of money investment borrowers attempt to undertake as a percentage of the real resources available in the society, due to central bank money creation.

This misdirection of capital, labor and raw materials away from that allocation and use consistent with people's actual decisions to consume and to save, means that every monetary-induced inflationary boom carries within it the seeds of an eventual and inescapable economic downturn.

Why? Because once the monetary expansion either slows down or is ended, interest rates will begin to more correctly reflect real available savings to sustain investments in the economy. At which point, it will start to be discovered that capital and labor have been drawn into investment uses and employments that cannot be completed or maintained in a, now, non-monetary inflationary environment.

An economic recession, therefore, is the discovery period of misallocations of scarce resources in the economy that requires a rebalancing and a recoordination of supplies and demands for a return to market- and competitively-determined harmony in the society's economic activities for long-run growth, employment and improved standards of living.

The current boom-bust cycle through which the U.S. and the world economy has been passing for over a decade, now, has shown the real world application and logic of what Ludwig von Mises demonstrated in The Theory of Money and Credit decades ago in the twentieth century.

And why reading and learning from this true classic of monetary theory and policy still offers an invaluable guide for ending the business cycles of our own time.