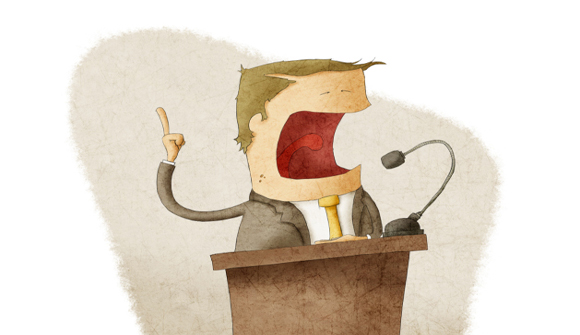 EDITORIAL
The Address Obama Should Have Given – For a Change to Freedom
By Richard Ebeling - January 29, 2010

President Barack Obama delivered his first State of the Union address before the Congress of the United States on January 27, and in essence called for more of the same policies that he has advocated during his first year in the White House.

The president proposed a new "stimulus" packaged to create "green" jobs in the small business and exporting sectors of the American economy; a continuing effort to implement some version of nationalized health care; the introduction of strangling environmental regulations over private enterprise; plus, additional and more intrusive government oversight of the finance and banking industry. He also proposed a partial "freeze" on some discretionary spending in the Federal government's budget.

In other words, the president, in an often defiant tone, insisted that as far as he is concerned the era of "Big Government" is not only still here to stay, but needs to be dramatically expanded — even if some recent elections and public opinion polls suggest that a growing number of Americans are leery of moving further in this direction.

In the face of the President Obama's determination to push for more "change" down the path of expanding political paternalism, one imagines what he might have said in the State of the Union address if he had chosen to propose the type of change that really would have meant greater freedom and opportunity for the American people.

"My fellow Americans, I come before you tonight to lay out a new agenda for change that will not only get our great nation out of our current and difficult economic times, but will put us on track for a bright and better future for ourselves and our children.

"Let me start out by saying that last month during my Christmas holiday vacation in Hawaii, I had the time to catch up on some reading. I found on the top shelf of a bookcase in the White House some books that I guess must have been left over from when Ronald Reagan was president more than twenty years ago.

"So I took with me some books I've never read before, indeed, that my "progressive" professors and mentors had never even mentioned during my college days. I read Henry Hazlitt's Economics in One Lesson, Milton Friedman's Free to Choose, Friedrich A. Hayek's The Road to Serfdom, and Ayn Rand's Capitalism: the Unknown Ideal.

"I stand before you tonight, my fellow Americans, and tell you that I now realize how misguided and wrong-headed were all the ideas that I learned and which molded by thinking as a young man, and which inspired my campaign when I ran for this high office in 2008."

[Behind the president, frozen and confused looks on the faces of Vice-President Joe Biden and Speaker Nancy Pelosi.]

"I now appreciate that real "people power" does not come by giving more political power and control to politicians and bureaucrats over the lives of the citizenry. No, it can only come from reducing the size and scope of government, and giving people the freedom to plan and direct their own lives through the peaceful and productive avenues of the free market and entrepreneurial creativity."

[Restive murmurs from the Democratic side of the House of Representatives.]

"Today, America still faces high unemployment and a sluggish business recovery. It is clear to me, now, that is was the "easy money" monetary policy of the Federal Reserve and government manipulation of the housing market through Fannie Mae and Freddie Mac during the Bush years that created the economic bubbles that burst before I took office.

"But after doing some follow-up reading while flying back to Washington right after the Detroit bomb-scare, I understand, now, that once the financial boom years had lead to the inescapable bust through which we are living, the policies that I advocated and pushed Congress to implement last year have only ended up making a bad situation even worse.

"I have instructed Treasury Secretary Tim Geithner to see to it that before the end of February every senior and middle level officer in his department will have read the works of Ludwig von Mises and Friedrich A. Hayek on the "Austrian" theory of the business cycle. They will be required to successfully pass a written test to demonstrate their understanding of this theory if they are to retain their positions in the Treasury Department"

[Secretary Geithner is seen on television text messaging on his Blackberry some of his Wall Street friends about possible job openings for someone with his background and experience.]

"I have also informed Ben Bernanke, that I am withdrawing my nomination for his reappointment for another term as chairman of the Federal Reserve System. I will immediately have my staff start vetting new candidates for that position who support transitioning the United States back to the gold standard."

[Ben Bernanke is seen on camera muttering under his breathe, "In Keynes we trust, in Keynes we trust," while making notes about courses he might teach back at Princeton University in the fall semester.]

"But the real change, my fellow Americans, will come from a radical reversal of the types of policies that our country has been following for far too long. To begin with, I will be presenting to the Congress an agenda to cut government spending across the board by 20 percent for each of the remaining three years of my term of office as your president. I am not only talking about cutting discretionary spending, which only makes up only a fraction of the Federal budget. No, I mean all programs, including what are called entitlement programs, as well. I will appoint a blue ribbon commission to devise a plan to completely end government involvement in and privatize social security and health care.

"The only way out of our current economic recession is to get out of the way of the private sector so it can create new and sustainable jobs to replace those that were recently lost because of the disastrous policies of the past that produced the unsustainable employments and imbalances that now need to be set right through the free interplay of market supply and demand.

"This will not come through the smoke and mirrors of supposed "stimulus" packages that only siphon off the wealth of you, the people, through taxes and borrowing, and which leave a huge debt that we and our children will have hanging over our heads for decades to come.

"I am determined to end all government regulatory, subsidy and redistributive programs that take the hard earned income and wealth out of your hands, the hardworking American citizenry, and return to you the financial ability and open and competitive opportunity to plan what is best for you and your family. "

[The cell phones start to vibrate in the pockets of every Senator and Congressmen on both sides of the aisle from lobbying representatives of special interest groups that have been feeding at the trough of government spending, and benefitting from regulatory favors and privileges.]

"Government cannot create wealth. It can only either redistribute it or destroy it. Wealth comes from free men applying their minds to creatively finding ways to improve life. This requires that each and every American know that their government will protect their life and property, and not plunder them for the benefit of privileged others who use the power of the state to gain what they cannot honestly earn in the free exchange of the market place.

"I would like to introduce Shalala Brown, sitting over there in the gallery next to my wife. Shalala is a heroic inner city young woman of seventeen who dropped out of high school to help support her family, but who cannot find a job because the minimum wage law has priced her modest labor skills out of the market.

"Sitting on the other side of my wife is Jenny Jones. Jenny is 93 this year. She worked hard, saved her money, and had been living all of her life in a modest, but well kept home that was taken away from her under eminent domain laws. A fat cat land developer with close ties to the mayor in the town where Jenny lived had her home condemned so a shopping mall could be built where Jenny's house once stood.

"What kind of judicial decision would deprive an honest, hardworking American of their home to benefit a greedy special interest and a money-hungry local government?"

[The president glances over, with a stern look of disapproval, at the justices of the Supreme Court.]

"I now realize that it has been the most exaggerated arrogance by people like myself – before I did my Christmas holiday reading – to think that we have the knowledge, wisdom and ability to plan, direct, and manipulate the lives of others in society.

[Behind the president, Speaker Pelosi is seen hyperventilating and grasping her chest. Vice-President Biden has a look of bewilderment with his hands stiff in mid-clap.]

"The knowledge, wisdom and ability to solve any and all of our problems can be found. But they only can be found through energies and efforts of free men and women who work together in the market place.

"The profit motive and pressures of peaceful competition for excellence through free enterprise will be the ways we find solutions to health care, the environment, and a more prosperous life and future for all Americans in the twenty-first century.

"My fellow Americans, thank you, and God bless America. Let the real changes for freedom begin."

If only the President of the United States had the understanding and the courage to give such a State of the Union address!