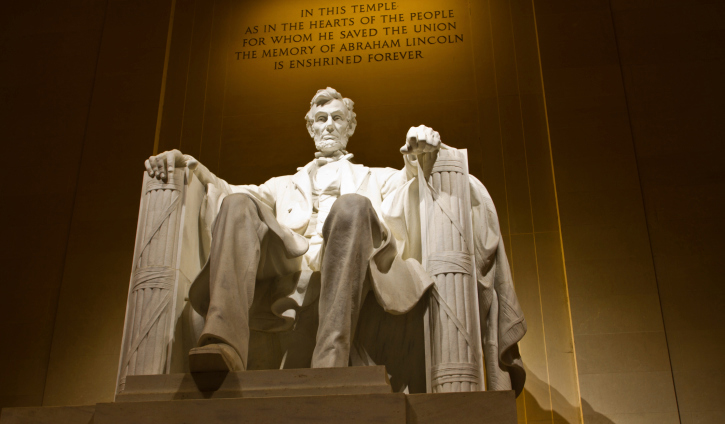 EDITORIAL
Lincoln and the Gettysburg Gospel
By Wendy McElroy - March 13, 2014

It has been called "the Gettysburg Gospel" because Abraham Lincoln's 271-word speech in 1863 is a key document in the creation of "civil religion" in America. Ronald Beiner, a professor of political science at the University of Toronto, defined "civil religion" as "the appropriation of religion by politics for its purposes." It occurs when a state uses religious concepts, rhetoric, rituals and symbolism to champion nationalism and other values it wishes to embed. The values then rise to the status of sacred doctrine and questioning them becomes blasphemy.

The Gettysburg Address is rife with biblical-style language and sentiment. In his 2009 book, Lincoln's Gettysburg Address: Echoes of the Bible and Book of Common Prayer, A.E. Elmore persuasively argues that Lincoln consciously drew upon both the Bible and the Episcopal Book of Common Prayer. For example, the address opens with the words "Four score and seven years ago"; this echoes Psalm 90:10, which states the lifespan of human beings as "threescore years and ten." The address closes with the words "government of the people, by the people, for the people, shall not perish from the earth." John 3:16 states that "who so ever believeth in him [Christ] shall not perish but have everlasting life." What "shall not perish" is "this nation, under God"which substitutes for Christ. Lincoln stated that the nation would continue because "the brave men, living and dead, who struggled here, have consecrated it." And from the "honored dead," Lincoln called for the living to "take increased devotion to that cause for which they gave the last full measure of devotion."

[Note: It is not known if Lincoln uttered the phrase "under God" at Gettysburg. The two drafts he wrote out before the address do not contain the phrase. It only appears in the various 'fund-raising' drafts he wrote afterward. Some historians believe he ad libbed the reference to God, however.]

The biblical references are not explained by deep religious piety within Lincoln himself. In his essay "Five Men at Random," Prejudices: Third Series, the iconoclastic libertarian H.L. Mencken commented, "Did he [Lincoln] believe in the Divinity of Christ? I am left in doubt. He was very polite about it, and very cautious, as befitted a politician in need of Christian votes, but how much genuine conviction was in that politeness?… Herndon and some of his other close friends always maintained that he was an atheist." Whether the report is true, Lincoln clearly disbelieved in some popular religious teachings of the day, such as those of the Methodist and Baptist Churches.

Lincoln was a highly-skilled politician. For example, he waited until 1863 to issue the Emancipation Proclamation, instead of doing it in the wake of Bull Run (1861), the first major land battle of the war. The proclamation is commonly credited with ending slavery but it contained a strange omission. It applied only to slaves within rebellious states that were not under Union control and not to slaves within Northern states over which Lincoln could have exerted immediate authority. Thus, the Proclamation simply ignored an estimated 900,000 Northern slaves, undoubtedly because it would have been politically unpopular. Nevertheless, as Mencken noted, few historians called Lincoln to task for such acts of practical politics. Instead, "[a]ll the popular pictures of him show him in his robes of state, and wearing an expression fit for a man about to be hanged… a sort of amalgam of John Wesley and the Holy Ghost."

The image befits a patron saint of America's civil religion.

What was the thrust of Lincoln's civil religion?

A dominant theme is America as "one nation, under God." Quite apart from the moral issue of slavery, this nationalistic belief sanctified a civil war against seceding states; it hallowed the bloodied conflict America has known by far.

It is ironic that Lincoln cites the Declaration of Independence because that document champions the right of secession by states and arguably by individuals. The Declaration opens, "When in the Course of human events, it becomes necessary for one people to dissolve the political bands which have connected them with another…" This is primarily a secession document. Only after announcing the right of the individual colonies to secede does the Declaration go on to state, "We hold these truths to be self-evident, that all men are created equal…" Yet Lincoln focused entirely upon the Declaration's statement of all men being created equal – an obvious reference to the unAmerican wrong of slavery.

Why? Because he needed that righteous focus in order to create a holy doctrine of nationalism; for the same reason, he needed to ignore the Declaration's cry for secession. This was a sea-change in America's self-image.

Was the Republic a unified nation in which the individual states had merged their sovereign rights and identities forever, or was it a federation of sovereign states joined together for specific purposes from which they could withdraw at any time?

Eventually, to justify the wholesale slaughter of one neighbor by another, Lincoln began to emphasize the moral need for emancipation. As background, however, I should state two caveats. First: Slavery always lay at the core of the Civil War if only because it was the basis upon which representation in the House of Representatives was based. The 3/5th rule in the Constitution gave each state representation based on their white adult male population plus 3/5ths of their slaves. [Note: The word "slave" never occurred in the Constitution.] And, so, the issue of slavery became inextricably tangled with political clout, which was inextricably tangled with the different economic interests of North and South.

In 1876, the black abolitionist Frederick Douglas said of Lincoln: "From a genuine abolition point of view, Mr. Lincoln seemed tardy, cold, dull, and indifferent, but measuring him by the sentiment of his country…he was swift, zealous, radical, and determined." Douglas's opinion was undoubtedly informed by the famous Lincoln-Douglas debates (Senator Stephen Douglas) of 1858 in which Lincoln said he could accept the prospect of slavery continuing for 100 years if he knew it was "on a course to ultimate extinction." This means slavery would have been outlawed in 1958. Thus, even though Lincoln was sincerely against slavery – and more so than the general populace – he was not an abolitionist. He did not plunge half a continent into death and misery over the moral need for emancipation. He issued the Emancipation Proclamation only when it was politically popular enough for him to do so and even then he exempted Northern slaves from the promise of freedom. In using slavery as a justification for war, Lincoln became what the libertarian Isabel Paterson called "a humanitarian with a guillotine."

The most plausible motive for the incredibly savage war: "My paramount object in this struggle is to save the Union." One nation, under God. The United States is – not are. He cemented the sacred doctrine of America's new civil religion: a strong centralized America, under God, and the living embodiment of equality. It was a nation from which no state could secede.

Many other messages reside in the Gettysburg Address, the Civil War and Lincoln's presidency. Arguably, they are all dwarfed by one message of civil religion; namely, a holy war will be launched against heretics who believe secession is possible. The nation is one. And it is one under God, whose will and truth is expressed through a government "of the people, by the people, for the people." Those who defy this canon will be punished unto death because heretics are hated worse than infidels.