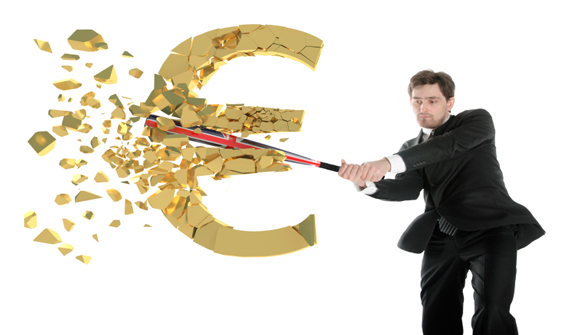 The great Lira revolt has begun in Italy … Italy's Five Star Movement has thrown down the gauntlet, calling for a euro referendum to end depression and save democracy, writes Ambrose Evans-Pritchard … The die is cast in Italy. Beppe Grillo's Five Star movement has launched a petition to drive for Italian withdrawal from Europe's monetary union and for the restoration of economic sovereignty. "We must leave the euro as soon as possible," said Mr Grillo, speaking at a rally over the weekend. "Tonight we are launching a consultative referendum. We will collect half a million signatures in six months – a million signatures – and we will take our case to parliament, and this time thanks to our 150 legislators, they will have to talk to us." – UK Telegraph

Free-Market Analysis: And so, the UK Telegraph tells us, it begins … the dizzy unraveling of the euro.

But not so fast. We've written about Beppe Grillo before. He's a very successful comic and politician, someone who is influential both culturally and politically.

But he also shaped the platform of his political party around Joseph Stiglitz's socialist economic ideas. And it's not the ideas that are puzzling so much as the affiliations, for Stiglitz is closely affiliated with George Soros – and Soros's Open Society Foundation is friendly to Grillo.

We wrote about it here:

Here's more from that previous article:

We can see from this reporting that far from being a convulsive national movement, Grillo's political effort seems at least in part to be a manufactured entity with a small initial base and a political narrative that has been manufactured by his recent victories.

We've written already about Grillo's associations with the socialist economist Stiglitz – and a visitor to George Soros's Open Society will find analyses of Grillo's victory as being a triumph for social media.

The Open Society seems quite supportive of Grillo despite his political opposition to the kind of globalism that Soros espouses. Stiglitz and Soros are reportedly longtime friends that share a fascination with turning IMF SDRs into a full-scale global currency.

But you will find none of this background about Grillo in this most recent Telegraph article. He is presented as an agitator, but a straightforward one. The conversation is about what Grillo intends to do as a disruptor and left-wing leader.

The relationship between Grillo, Stiglitz and Soros gives rise to all sorts of fascinating speculation. When one examines the globalist movement generally, one usually discovers a dialectic in which both sides of an argument are subject to considerable globalist influence.

That would seem to be the case here, though one would be hard put to believe that those who want expansive internationalism would work against their own cause by creating a political party and a celebrity politician taking a stand against the euro. Nonetheless, that could be the case.

Ever since the pugnacious comedian burst on the political scene, the eurozone elites have comforted themselves that the party is not really Eurosceptic at heart, and certainly does not wish bring back the lira. This illusion has been shattered.

A referendum itself would not be binding, but a "law of popular initiative" certainly would be. For the first time, a process is underway in Italy that will set off a national debate on monetary union and may force a vote on EMU membership that cannot easily be controlled.

Gianroberto Casaleggio, the party's co-founder and economic guru, told me today that the Five Star Movement – or Cinque Stelle – had set out its demands in May, calling for the creation of Eurobonds to back up EMU, as well as the abolition of the EU Fiscal Compact. "Five months have gone by and we have had no reply. They have totally ignored us," he said.

… The ECB letter – La Lettera as it is known simply in Italy – was the secret diktat sent to Italy's leader Silvio Berlusconi in August 2011. It demanded drastic "reforms" of all kinds. A similar letter was sent to Spain's leader. The quid pro quo was bond purchases.

… Cinque Stelle won 25.6pc of the vote in Italy's general elections last year, neck and neck with the ruling Democratic Party (PD) . (It did not win a comparable bloc of seats because of the way the parliamentary system is designed). It has 108 deputies in the lower house, and 54 senators.

We have reached a remarkable state of affairs in all three of EMU's leading economies: France's Front National swept to victory in the European elections in May with calls for an immediate return of the French franc; Germany's anti-euro party AfD has suddenly broken into three state parliaments with calls for a return of the Deutsche Mark; and now Cinque Stelle wants a return of the lira in a country that has been reliably and passionately pro-European for sixty years.

We're sure if we take a look at Europe's other "alternative" parties such as those mentioned above, we'll find some sort of elite backing. The idea is always to have a say in both sides of the political fray. But in the case of Grillo, the scenario is certainly a surprising one.

It bears watching. Perhaps the idea is to bring anti-euro feelings to a head, create a referendum and work to generate a popular vote that reaffirms the status quo. That's the strategy that seems to have been adopted in Scotland and it's probably quieted anti-British sentiment, at least for the short term.

Another possibility is that backers of the euro have had enough: Perhaps Grillo's announcement signals the beginning of a controlled takedown of the euro. It doesn't necessarily mean the end of the euro; perhaps it could mark a new strategy that will result in a Northern and Southern euro.

There are other possibilities, all of them having considerable financial and investment impacts. We'll have to wait and see how Grillo's latest initiative evolves.

But one thing we're sure of … It's likely not exactly what it seems. These narratives are never especially straightforward, not in the modern era of "directed history."