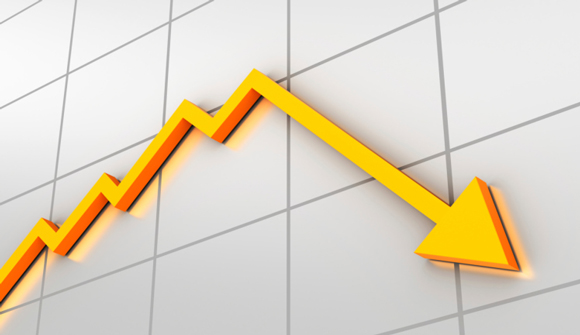 Credit Suisse: 'Gold Is Going To Get Crushed' … Bearish sentiment toward gold has prices for the yellow metal tumbling again. On Wednesday, George Soros revealed through a regulatory filing that he cut his gold exposure during the first quarter. In a new note to clients, Credit Suisse's Ric Deverall forecasted that gold would plunge to $1,100 this year and eventually to $1,000 within five years. This according to Bloomberg's Maria Kolesnikova. – Business Insider

Dominant Social Theme: There is nothing positive in the gold story. Get out while you can – and never buy it again. It's just … barbaric.

Free-Market Analysis: The repression of the gold price has turned into a timely dominant social theme, in our view. The lines are clearly drawn and insiders are signaling that the trend is down.

They are talking it down, pushing it down and forecasting further down markets.

Nothing is much clearer in the markets than this meme. It is surely a further vindication of our paradigm because money has been made and lost via the implementation in an enthusiastic and visible way using evident and obvious promotional methodologies.

In fact, it has been so visible that we often wonder why people don't sue. There are likely millions of investors who have lost considerable wealth because of certain market manipulations affecting the price of paper gold.

And recall, please, that paper gold is not physical. With the rise of ETFs, futures and options, the price of paper gold is infinitely fungible. And that is the price that has moved down.

Thus, the act of buying physical gold and taking delivery is placed artificially alongside the act of purchasing gold electronically and foregoing delivery.

They are infinitely different acts. But they are considered the same for purposes of pricing, as we understand it.

In fact, the price of physical gold and delivery is likely a good deal higher than the act of purchasing paper gold. It may be as much as US$500 higher, if one can even find the gold to purchase.

And increasingly, the price differential is probably creating a kind of gray market for off-exchange private deals. People will not stand for the "formal" price and thus, will not utilize formal methodologies for buying and selling.

Over time this differential will lead to … what? At least an erosion of formal authority over the gold market.

And when the formal instrumentalities are eroded, this surely will bring forth a contemplation of force by governmental authorities. They will not wish to lose control, even if it means something as Draconian as the contemplation of confiscation.

This is just one of the issues that people should consider when configuring their gold purchases and taking delivery. People should also look at equity markets. While these markets seem to us more controlled than ever, the powers-that-be are being fairly definitive about the positive prospects for paper investments generally, including stocks.

Just listen to this language:

"Gold is going to get crushed," Deverell told reporters in London today. "The need to buy gold for wealth preservation fell down and the probability of inflation on a one- to three-year horizon is significantly] diminished." … "When gold is going up, it looks like a great idea to buy more gold," Deverell said. "And when it's going down, do you really think risk-averse central bankers are going to try and catch the knife? No."

Deverell was responding to the latest stats on central bank gold reserves. According to a new report from the World Gold Council, these banks bought around 109 tonnes of gold in the first quarter, marking the seventh straight quarter of net purchases.

See how definitive it is? You need to pay attention, in our humble view. The world is a big playground for those who promote the kinds of dominant social themes that we try to analyze. Right now, physical investments are under attack and the globalists involved are doing what they can to pump up paper investments of all kinds. Of course, paper investments are far more controllable than gold and silver.

Once one understands the patterns, they can become obvious. Forewarned is forearmed.