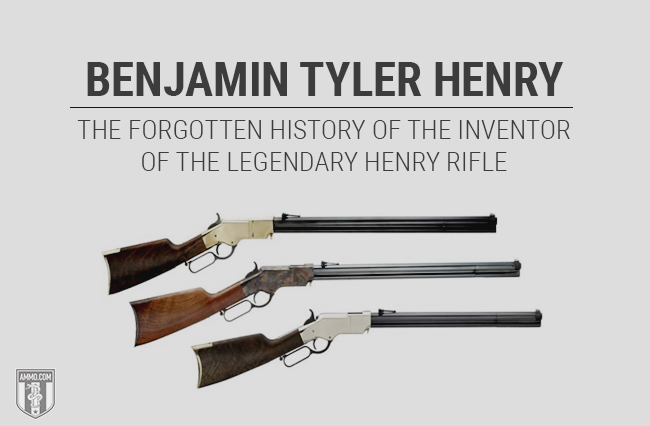 While he doesn’t have the same household recognition as Sam Colt or Smith & Wesson, Benjamin Tyler Henry is a towering figure in the world of ammunition and firearms – and those in the know, know. Henry invented the eponymous Henry rifle, which was the world’s first repeating revolver that actually worked.

Henry was born in Claremont, New Hampshire in 1821, to one of the most prominent families in the area. His grandfather, Colonel Benjamin Tyler, had been the town’s first millwright, who founded several successful mills in the town and invented the wry-fly water wheel. One of his cousins, James Tyler, likewise continued in the innovative spirit of their shared grandfather by perfecting this water-wheel design, creating much of the prosperity that visited the town during the early years of the Industrial Revolution, but allowing paper and textile mills to spring up throughout the town using the power of this perfected design.

At a young age, he became an apprentice gunsmith, working his way up to the foreman at Robins & Lawrence Arms Company of Windsor, Vermont. It was here that he worked with Horace Smith and Daniel B. Wesson on the volitional repeater, which would eventually become the Henry rifle.

This development prompted Smith and Wesson to form the first Smith & Wesson Company, later known as the Volcanic Repeating Arms Company, which is what it is commonly referred to as today to differentiate it from the later (and current) Smith & Wesson. This company was started in 1855, with the addition of some new investors, one of whom was Oliver Winchester. This was arguably one of the most stacked payrolls in the history of weapons design.

Unfortunately, it was not to last. Wesson left eight months later. For his part, Winchester forced the company into insolvency in late 1856, took the company over, moved it to New Haven, Connecticut, and transformed it into the New Haven Arms Company – which later became the Winchester Repeating Arms Company. Henry was hired as the plant superintendent by Winchester, because he was deeply trusted by all the principals of the company.

Henry had to work hard and doggedly to get a design that would work as intended. Finally, the hard work paid off. On October 16, 1860, Henry received a patent for the Henry .44 caliber repeating rifle, which soon demonstrated just how effective such a weapon would be on the field of battle during the Civil War. The repeating rifle quickly demonstrated its superiority to the muzzle-loaded rifle when it was rolled out onto the battlefield in 1862. It effectively gave a single man the firepower of a dozen men.

The Confederacy could hardly stand a chance when it was so outgunned. While a highly skilled rifleman could fire off a few rounds in a minute from his muzzle loader, the Henry repeating rifle allowed for 16 shots to be fired without any reloading at all. Muskets were much cheaper, often less than half the price of the Henry. However, the dollar of a soldier and the military was much better spent on something with the comparatively awesome firepower of the Henry.

All told 15,000 Henrys were produced, many of which are collectors items today. The brass is known to patinate beautifully. No one at the time was able to see how much of an impact the Henry was going to have both on the world of firearms – and by extension, human history, thanks to its role in the Civil War and the Indian Wars.

The weapon was likewise incredibly popular with the civilian sector. The sales were particularly brisk in places that were in the borderland area between North and South: Kentucky, Illinois, Missouri and Indiana. It’s also worth noting that a number of these places were still reasonably considered “the frontier” at the time that the Henry repeating rifle made its debut on the scene.

This is because the rifle wasn’t just fast in terms of its rate of fire. It was also highly accurate. Major William Ludlow’s tale of the Henry rifle’s efficacy during the Battle of Allatoona Pass likely sold cases of the weapon: “What saved us that day was the fact that we had a number of Henry rifles.” All told, a company of 16 shooters hit the parapet and were quickly dropped with the Henry rifle. Indeed, such a psychological effect was produced that no one else dared to try to take the fort.

In 1864, Henry began his split from Winchester. He was unhappy about his compensation and even petitioned the Connecticut State Legislature to give him ownership over the company. WInchester, for his part, beat a quick path back from Europe and outfoxed Henry by once again reforming New Haven Arms as the Winchester Repeating Arms Company, the name by which it was known for decades. Winchester modified the original Henry repeating rifle to make it into the Winchester Model 1866.

Compensation was not the only source of his unhappiness. Henry was also unsatisfied with his work. More than anything, he wanted to be a designer rather than a foreman, leading the daily work of production. He was always looking for ways to improve and perfect his creation.

Henry continued his work as a lone gunsmith until his passing in 1898. By all accounts, he was happy and satisfied with his work, which allowed him to innovate and work with weapons in the kind of hands-on way that Winchester prevented him from doing. While he did seek what he believed was his, he never sought fame or fortune through making firearms – if that had been his aim, he certainly could have started up another weapons factory after parting ways with Winchester.

To own a Henry is to own a classic piece of American design. Think of yourself as owning a 1903 Harley-Davidson. Sure, you’re not going to win any motorcycle races with it, but who cares? It’s hardly the point.

Henry was in many ways the first wildcatter – a man who saw a need in the world of firearms and went about making what he and others needed. A true American original.

Benjamin Tyler Henry: The Forgotten History of the Inventor of the Legendary Henry Rifle originally appeared in the Resistance Library at Ammo.com.