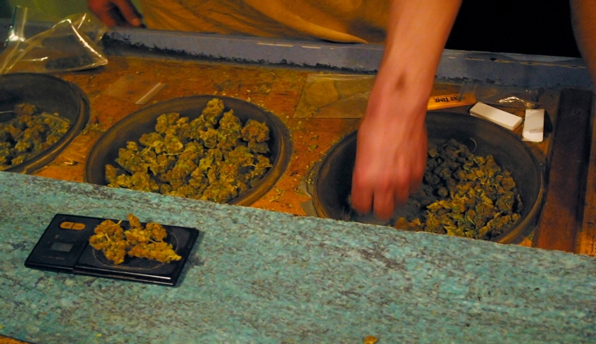 Federal Liberals maintain 10 per cent lead over Conservatives A new Forum Research public opinion poll shows the federal Liberals maintaining their 10 per cent lead over the Conservatives in popular support … A new poll by Forum Research found 39 per cent of respondents would vote Liberal if the federal election were held today, while 29 per cent would vote Conservative. When you break out the latest numbers regionally across the country, the picture looks very promising for the Liberals … — TheStar.com

Free-Market Analysis: The victory of Federal Liberals in upcoming Canadian elections would surely help confirm our hypothesis that the legalization of marijuana is a pre-planned elite promotion.

Justin Trudeau himself is behind it – and Trudeau is a convincing asset when it comes such legalization. A handsome and seemingly sincere scion of a political legend (former socialist Prime Minister Pierre Trudeau), it is perfectly likely that at some point he may be in a position to change the legal status of marijuana. It may be sooner rather than later.

Conservatives had initially decided to make Trudeau's objective of a legal recreational marijuana market into a campaign issue. But then they did some research and found out that most Canadians were perfectly comfortable with legal marijuana.

The Orléans Star recently put it this way:

Then the Conservatives had second thoughts. They organized focus groups and ordered up public opinion surveys and to their surprise discovered that a great many Canadians want the marijuana laws changed.

The same thing is happening in the United States where one state after another is relaxing marijuana laws. Suddenly laughing at Trudeau's marijuana plan was no longer such a priority for the Conservative caucus. Nor was it politically viable. But they couldn't just come out and say "Trudeau was right; and now we agree with him on legalization or decriminalization."

So on March 5, the Justice minister Peter MacKay came out with his own plan, saying that he was discussing with police a new policy that would allow police officers to issue "tickets" to people caught with small amounts of marijuana, rather than laying criminal charges which in many cases leaves people with a criminal record that does them no good in later life.

… Frequent marijuana smokers had a fun day. They began talking about MacKay's cops giving out "pot tickets." When a cabinet minister makes an official announcement like that, it means he's already talked it over with the other cabinet ministers. It also meant the Conservative caucus had to stop attacking Trudeau on marijuana … Meanwhile, nobody in Conservative ranks is laughing at Trudeau or "pot-for-the-kids."

The last sentence is noteworthy because Conservatives had intended to attack Trudeau for corrupting children by making marijuana more easily available to them.

This attack was likely doomed even before Conservatives discovered they were on the wrong side of the issue with the Canadian public. That's because legalization almost inevitably leads to better outcomes for a specific product or service.

Ideally, the market itself would regulate marijuana. Parents for the most part can do a much better job of looking out for their children's welfare than the state. But even so, legalization would be a step forward for those who are concerned about juvenile access to cannabis.

The Conservative argument was never going to be convincing, and the idea of giving marijuana users "tickets" is probably no more viable. Obviously, the Conservative brain trust has not yet internalized the message that legal marijuana is the wave of the future.

We understand this to be true because we know a power-elite production when we see one. After all, the legal marijuana meme had its roots in little Uruguay – and just a few months later The Economist magazine (an obvious globalist mouthpiece) named Uruguay its "country of the year."

This has been a globalist production from the beginning. Even globalist point man George Soros is deeply involved. We're not sure exactly WHY legalizing marijuana became a power elite production, but we figure one reason is that it gives the mainstream media something to talk about besides the increasingly authoritarian war on terror and failing economic and political policies.

No doubt, further reasons shall emerge as this dominant social theme matures. But even now it's easy to see this theme blowing up around the world – and the charismatic Justin Trudeau's support for legalization is just one more evidence of a meme whose time has come.

Trudeau is doubtless on the right side of this issue. The Conservatives are probably going to lose in Canada and eventually marijuana is going to be decriminalized and possibly legalized. This is part of a larger worldwide promotion that is being presented by globalists as a kind of directed history.

We're supposed to believe the marijuana meme is spontaneous, but it's not. We'll take it anyway …