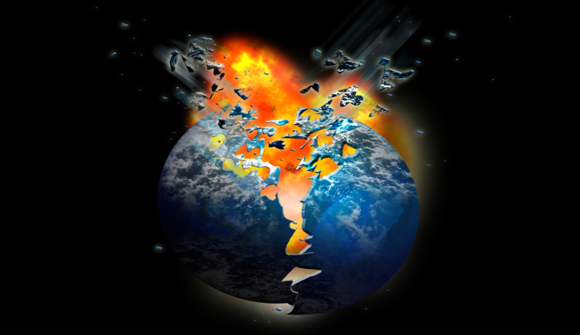 STAFF NEWS & ANALYSIS
Carney Gets Ready to Blow Up the World
By Staff News & Analysis - October 29, 2013

Central banks need to 'keep up' with markets says Mark Carney … The Bank of England, Mark Carney said on Thursday night, is open for business. The governor's message to the City was clear. The days when the Old Lady preached the perils of "moral hazard" without due regard to financial pressures are well and truly over. – Financial Times

Free-Market Analysis: This article is truly scary. Like a bullet across the bow, or the crack of a whip, it announces with certainty that the world's top bankers intend to blanket the world with faux currency.

They don't give a hoot. They're out to give us the business and bust the bank. When it's done, there'll be nothing left but a smoking ruin. Reading between the lines, that's what this article says.

Are we exaggerating? Let's see.

Carney was said by his central banking peers to be the "best" central banker of his generation and his recent choice to head the Bank of England was therefore preordained. In fact, we figured that was a bit like being the "best" used car salesman.

But we were wrong. It's worse, much worse. What this article in the Financial Times tells us is that Carney was brought in not just to glad-hand the media and put a sympathetic face on this bloody and miserable facility, but his real brief is to use its powers to the utmost.

He's even talking about printing money for banks in currencies other than sterling!

Now, we might carry a glimmer of sympathy for Carney were this another time. If this were, say, 1982, right after a thorough purge of fiat money with the economy flat on its back and withering from lack of liquidity. But this is, we figure, somewhere around 1976.

See, the business cycle hasn't turned yet. The gold miners haven't blown off. The business cycle has been stopped in its tracks but the economy is still gravely distorted. The largest financial outfits still need purging, or even bankruptcy before the bankers can resume flogging the system with yet more power.

But they don't seem to care. To reinflate now as hard as possible is, well … bananas.

Under Lord King, its former governor, the BoE gained a reputation for taking an almost Victorian attitude to imperilled banks – with its reaction to the crisis surrounding failed Northern Rock in 2007 proving to be particularly sluggish. Then, the former governor was gradually forced to relax his battle against moral hazard as he realised just how grave the crisis afflicting the sector had become.

Today, a new regime has arrived. Central banks need to "keep up" with financial market developments, Mr Carney said at a Financial Times event. The BoE is rolling up its sleeves and doing what is necessary to keep the banking sector humming – in both the normal course of business and in crisis conditions.

The BoE does not want its facilities for providing liquidity to the banking sector to be ornamental, Mr Carney explained. "We can catalyse more efficient and effective private collateral management by backstopping private markets."

The terms on which the BoE will engage with the private banking sector will be significantly eased under the new governor's framework. Banks will be able to borrow against a broader range of collateral, including portfolios of loans, for longer periods of time and in exchange for fees that in some cases will be halved. "Banks can be confident that, when they want to use our facilities, they will be allowed to access them," the governor said.

This, he stressed, should not be taken as a sign that the BoE was becoming a soft touch. Mr Carney insisted last night that the bank was not "cheerleading for the City". With supervision returned to the central bank from the now-defunct Financial Services Authority, it is in a much better position to know whether its private counterparties are running their operations in a prudent fashion.

On top of that, new liquidity regulations will ensure that banks do not leave themselves so exposed to sudden market freezes. The reforms follow a report delivered by veteran banker Bill Winters which said the BoE's liquidity systems were "robust and broadly fit for purpose" but that the bank needed to find ways of reducing the stigma attached to banks seeking liquidity through its discount window facility.

Accordingly the BoE's discount window facility, which banks can approach confidentially when they are facing temporary cash crunches, will have a lower, flat-rate "entry fee". The BoE will delay the disclosure of any use of the facility as it seeks to minimise the risks of banks being punished in the markets for accessing it. The BoE's indexed long-term repo auction, a standard monthly facility, will also be cheaper and will be offered against a broader range of collateral and for an extended term.

On top of this, the BoE is making permanent its extended collateral term repo – a facility aimed at quelling periods of market-wide stress that was introduced last year at the height of the euro crisis. Mr Carney said he will consider going further and extending access to its regular facilities to nonbanks, raising the prospect that broker-dealers could be welcomed to the inner circle of BoE counterparties.

The central bank will also review the possibility of providing liquidity in currencies other than sterling, cementing its status as one of the prime global financial centres.

You see? It's truly sociopathic. Having pumped something like US$50 trillion into the world's economy (we figure) over the past five years, they are now moving to open the taps further.

In a fit of incredulity some four years ago, we estimated that central bankers would spend US$100 trillion reinflating from the crash of 2008. Last year we apologized, writing that it was probably only going to cost US$50 trillion, short term.

These people are obviously ready to dump another US$10 or 20 or 30 or even more into the markets over the next few years. To repeat: We can't believe it. They're even willing to do it in other currencies!

The central bank will also review the possibility of providing liquidity in currencies other than sterling, cementing its status as one of the prime global financial centres.

We didn't understand why the Bank of Japan decided suddenly on stimulative measures, or the Bank of India, for that matter. But now we "get it." This is a BIS coordinated affair. They may come out with different rationales for different banks but the result is going to be the same. Print, baby, print.

It's all fitting together. Even the crazy Economist article we analyzed the other day that called for increased monetization to break out of a non-existent "liquidity trap."

And Janet Yellen's nomination, too. She's been tapped because she's pre-disposed to money printing. She doesn't even need to be manipulated by the men behind the scenes setting all of this up. She's a true believer.

So, yes, like serial murderers with a taste for blood, these people are going back on the prowl. They're going to print like maniacs, sending stock averages through the proverbial roof. Carney, like some kind of genial sociopath, is going to preside over Britain's ultimate reflation.

And Yellen will do the deed in the US.

This won't last long. A few years maybe, or maybe less. And then there'll be blood on the streets. There are already bubbles in real estate and the stock market in London and Germany.

They don't seem to care. They're shoving ahead like bullies in a lunch line. They won't stop until they've reached the punch bowl and offered everyone in the room free glasses again and again.

It's truly crazy what they have in mind.

Get ready to watch stocks run up to the moon, and then probably back down – if there are even any markets left after they're through.