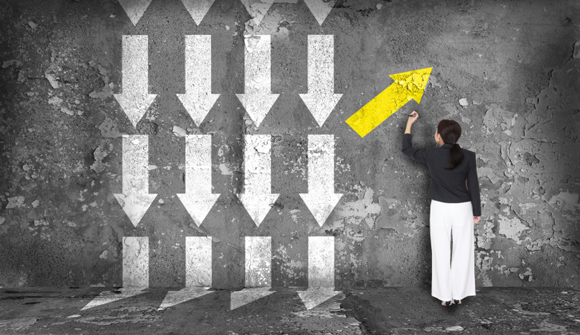 What if saving the economy was the easy part? … If the past seven years have proven anything, it's that the biggest danger is often the one that no one sees coming. "You have to worry, otherwise you can't be a central banker," Fed Vice Chairman Stanley Fischer said in a speech this month. "What worries me most is that things happen: You've got a nice framework. It's all organized. You're going down this path, looking left, looking right — something hits you right in the back of the head. "That's what most frightens me. What are we missing?" – Washington Post

Dominant Social Theme: The Fed muddled through, but challenges continue.

Free-Market Analysis: This endless article, excerpted above, is a perfect expression of a favorite establishment meme: The Fed as an innocuous intellectual muddle.

For thousands of words, the article describes the ins and outs of various Fed attempts to salvage the US economy beginning in 2008. Presumably the reason for the article is that this period is now coming to an end. Mission accomplished. The article is meant to be a retrospective.

But in these overly sophisticated times, it wouldn't do to write an article that merely delineates a prolonged triumph. Instead the article drones on about all the different things Fed officials tried to help the US economy come back to life – how they failed and tried again … and again.

One would not think reading this article that the Fed was an extracurricular banking entity of enormous power that had just illegally lent some US$15 trillion or more abroad to banking entities in danger of shutting down. No mention of that, of course.

The Fed legally has no brief to provide currency to non-US financial facilities but Ben Bernanke apparently did it nonetheless in 2008-2009, sending short-term loans overseas as necessary. Even today, reportedly, these loans have not been returned.

But that is not the point of an article that begins like this:

As the nation's financial system teetered on the brink of collapse seven years ago, top officials at the Federal Reserve huddled inside their marbled headquarters in Washington to brainstorm what it would take to save the American economy.

They called it "blue-sky thinking," and then-Fed Chairman Ben S. Bernanke led the exercises. The goal was to come up with the most creative, most aggressive, most powerful strategies the central bank could pursue to fight the worst economic downturn in nearly 70 years.

The list was long, and freed from the political and financial constraints of the real world, the suggestions at times felt faintly fictitious. But in fact, the country would require more help than the Fed ever imagined.

The reason that the economy would require so much help is because Bernanke, like Greenspan before him, was determined to keep interest rates artificially low for a prolonged period of time.

However, Bernanke's effort only came after he hiked rates hard in the middle of the first decade, inverting the yield curve that almost inevitably announces a recession.

You won't find any reference to the yield curve inversion in this article, which is not surprising given that despite the massive number of US financial publications very few ever mention Bernanke's hikes within the context of the following subprime crash.

Instead, we get recitations of all the ways the Fed tried and failed to reignite an economy it was responsible for damping in the first place. Inevitably, when the price and volume of currency is "fixed" rather than allowed to settle on a marketplace rate, bubbles form and burst and millions suffer.

That's not emphasized, either. The emphasis of the article, again, is on the endless efforts of the Fed to muddle through. "Even blue-sky thinking didn't anticipate the grinding pace of the nation's recovery, and officials repeatedly found themselves reaching beyond the horizon."

You see? They try hard. They fail. They try again. They are just like us except that they print as much money as they want and send it wherever they wish.

Finally, we are informed, a kind of victory occurs. "Their historic effort is … coming to an end. This month, the central bank announced it is beginning to phase out its support for the American economy."

Hallelujah! The system works. And it is manned by modest individuals. "I thought the recovery would happen more quickly," said Don Kohn, second-in-command at the central bank during the crisis and now a senior fellow at the Brookings Institution. "I wouldn't have guessed in the fall of 2008 that it would be seven years before interest rates rose again."

Kohn is quoted as saying that "humility" was an important lesson for central bankers to internalize. "Never be too sure of yourself," Kohn said. And Bernanke comes off well, too, indicating that it was no fun to be straddling the beating heart of the world's most powerful financial institution.

"It was kind of like if you're in a car wreck. You're mostly involved in trying to avoid going off the bridge," Bernanke reflected last year at the Brookings Institution in his final public appearance before stepping down from the top job. "And then later on, you say, 'Oh, my God.' "

The result, the article tells us: It worked. "Less than a year after the 'Lehman weekend,' America's recession was officially over."

But since this article is not really interested in handing out plaudits, the tone immediately reverts. We learn there is plenty of dissension within the ranks of the Fed, with various top officials believing they should have moved sooner to hike rates.

"Two of the Fed's staunchest supporters of stimulus, Williams and Boston Fed President Eric Rosengren, warned that years of low rates may have driven investors to seek bigger returns in riskier corners of the market, such as commercial real estate."

Of course, the sniping doesn't just come from Fed officials. Plenty of others are dissatisfied with the Fed's performance including Democratic presidential candidate Bernie Sanders.

In a recent New York Times op-ed, Sanders blasted the Fed for its rate hike and called for fundamental change in the way the Fed is run. A self-proclaimed democratic socialist senator from Vermont, Sanders called the Fed a "puppet" for Wall Street.

The recent decision by the Fed to raise interest rates is the latest example of the rigged economic system. Big bankers and their supporters in Congress have been telling us for years that runaway inflation is just around the corner. They have been dead wrong each time. Raising interest rates now is a disaster for small business owners who need loans to hire more workers and Americans who need more jobs and higher wages."

Sanders said he would attempt to make significant changes to the way the Fed operates if elected president by having Congress nominate and confirm board members. He also wants full and unredacted transcripts from the Federal Open Market Committee released within six months, not five years.

The trouble with Sanders's recommendations is that they don't solve the fundamental problem the Fed poses. It is not, as the Washington Post tries to portray it, an innocuous facility filled with self-effacing academics. It is the most powerful force in US society and as the producer of the world's reserve currency it is also the most important factor in the world's economy.

And yet its creation and implementation is fundamentally flawed. It is impossible to fix the price and value of currency without creating disastrous distortions in the economy. After great booms come equally great busts, sapping the wealth of the nation and the entrepreneurial zeal of its inhabitants.

Every collapse consolidates power among fewer and fewer people and further erodes social comity. Eventually, a tipping point results and the nation itself is toppled either in pieces or all at once.

This enormous power to terraform whole societies while simultaneously debasing money and ruining the middle class is a tool that those who wield it are surely loath to give up. In other words, they won't without a fight … literally. The Fed unfortunately is so intertwined with the economy of the world and the US that it is hard to fathom how things could change fundamentally.

We often point out that to wait for real socio-economic change is a kind of fool's errand. One needs to take human action for oneself and one's family. One's prosperity, wealth and position within a community are all controllable to some extent over time. Begin planning now, we have urged, and use all the tools at your disposal.

You are reading The Daily Bell and perhaps other such publications. Act on what you know.