Much to the chagrin of the ruling class, despite their best efforts for over half of a year, an uncooperative 25% percent of the American proletariat still refuses to submit to the “vaccine” agenda.

Just like any analyst familiar with their keep-it-stupid-simple modus operandi would expect them to, the neoliberal media goon squad has turned, as it inevitably does, to old-fashioned Russophobia and race-baiting once their agenda hit a brick wall.

“Investigations by the US State Department and the UK Foreign Office have described how Russian intelligence organizations seek to discredit Western COVID-19 vaccines… President Joe Biden has warned Russian media groups to halt their anti-vaccine aggression.”

Well, golly gee, if the US State Department says so…. it’s not as if bureaucrats on its payroll lie all the time, as a matter of routine for political expediency:

“State Department spokesman Richard Boucher said though the search for WMD yielded no results, the United States, based on ‘extensive intelligence,’ believed before it invaded Iraq that Saddam was intent on acquiring them.” 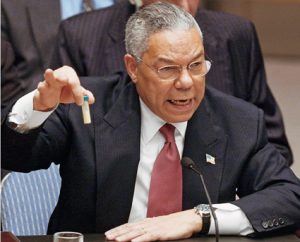 Shifting gears from red-baiting to racism, the Nature Journal “war on anti-vaxxers” manual offers the next explanation for why normal Americans don’t believe the state propaganda on experimental mRNA gene therapies marketed as “vaccines”:

But, you might ask: where is the actual evidence that “far-right extremists” (whatever that means) are influencing racial minorities to disrespect the science?

The Nature Journal piece is long on paranoid accusations against Russians and white nationalists but notably short on facts.

The actual, primary reason normal Americans don’t “respect the science,” as the corporate media puts it, is that the public health authorities (in collusion with the corporate media) lied for a year straight – in many instances citing the exact same Nature Journal that now peddles race-baiting Russiagate agitprop to harangue Americans into submission to the vaccine agenda — about the true origins of the COVID pandemic:

“There’s still much we don’t know about the coronavirus pandemic, but virus experts agree on one piece of its origin story…

In early February, Chinese researchers published an article in Nature — a top science journal — that concluded the “2019-nCoV is 96% identical at the whole-genome level to a bat coronavirus.”

In “How Privilege Plays A Role In America’s Vaccine Hesitancy,” NPR guest Junaid Nabi tries a variation on Nature Journal’s shut-up-racist-and-roll-up-your-sleeve strategy – in this instance, an homage to the classic eat-your-vegetables-because-starving-African-children-don’t-have-any nag of mothers worldwide:

“To refuse getting vaccinations, that to me is a big privilege because this is not something that’s available to people in other parts of the world. They are struggling to get vaccinations.”**

*Addendum #1: Impoverished residents of the Third World are not, in fact, “struggling to get vaccinations” because Nebraska corn farmers won’t take their shots (or whatever the lazy insinuation from NPR is here); rather, they can’t access said “vaccines” because self-professed philanthropist Bill Gates refuses to share “vaccine” formulas with third-party manufacturers in a cynical ploy to protect Big Pharma profits.

Perhaps, though, the NPR hit piece on Big Pharma’s epic greed in the middle of what the medical-industrial complex itself describes as a worldwide public health catastrophe is forthcoming; just don’t hold your breath.

*Addendum #2: Are the 40-50% of NIH employees who themselves refuse the COVID “vaccines” (as admitted by Anthony Fauci in May 11th, 2021 Congressional testimony) also exercising undue privilege? 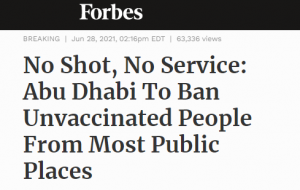 In the FB comments section of a June 28th Forbes article titled “No Shot, No Service: Abu Dhabi To Ban Unvaccinated People From Most Public Places” celebrating vaccine apartheid in the UAE, the pro-vaxxers ran wild, beta-testing “plague rat” as a visceral new replacement label for the tamer “vaccine-hesitant” label. 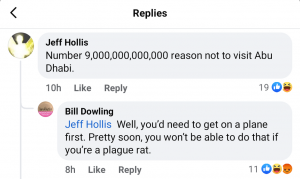 Joseph Goebbels would be proud: 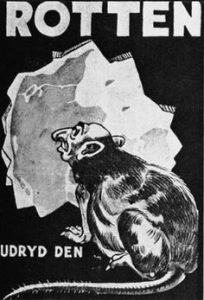 Next stop on the COVID crazy-train: internment camps for the deplorables?

Normal people volunteer by mentoring a daddy-less child or planting petunias along their neighborhood sidewalks or helping old ladies traverse the crosswalk, etc.

The trendiest #BlueMAGA “volunteer work,” though, is to manipulate unsuspecting social media users (i.e., “honey-potting” them) into getting vaxxed:

“Dave and Richard… now run multiple ‘honeypot’ Facebook groups… Inside the groups, people who believe in vaccine and Covid-19 conspiracy theories are allowed by the moderators to post false and misleading articles…. ‘And then…’ Richard says, ‘we’d start questioning their narrative.'”

In sweet, honey-coated irony, however, Facebook (as part of its extensive censorship regime uncovered by Project Veritas) suspended the group for “COVID misinformation”:

“Richard and Dave’s honeypot group has been suspended – because while they say their intentions are good, the group does contain posts pushing falsehoods… It’s a situation that highlights the moderation challenges faced by Facebook – where a group like this, which they say is dedicated to helping individuals, technically breaches the company’s rules.” 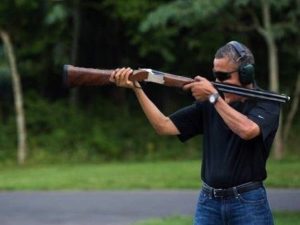 Ben Bartee is a Bangkok-based American journalist with opposable thumbs. Via his blog, Armageddon Prose, subscribe to get his free stuff, contact him, or offer a token of financial support. Armageddon Prose on social media: Facebook Twitter Gab LinkedIn Medium