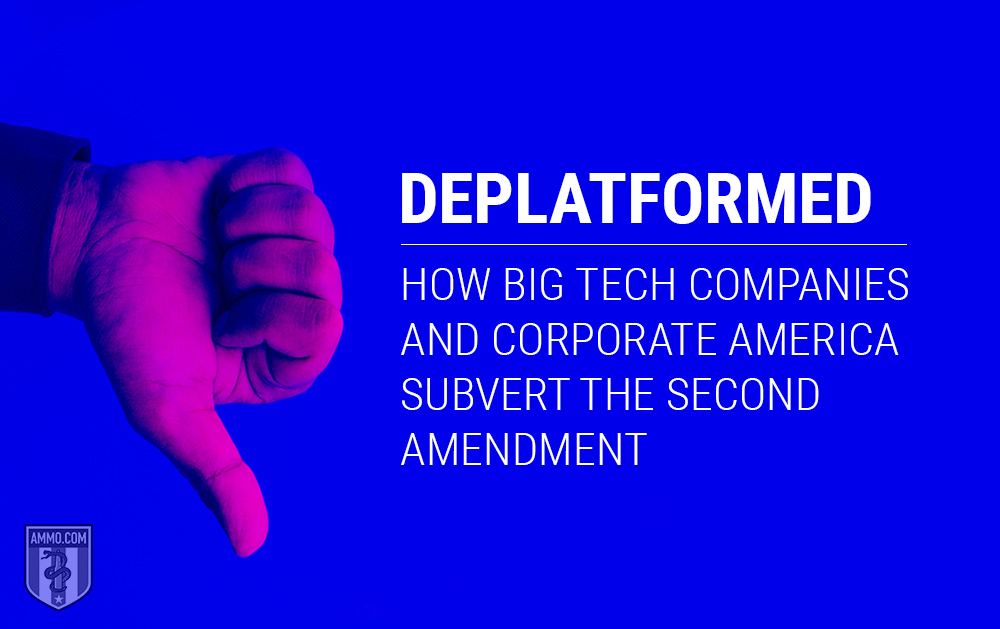 Twitter permanently banned the libertarian financial website Zero Hedge from the platform on Friday—January 31st after it published an article questioning the involvement of a Chinese scientist in the outbreak of the deadly Coronavirus.

Regardless of one’s religious faith or lack thereof, there is an illustrative case in this biblical story: When one cannot buy or sell, one is metaphorically up the creek. Short of producing everything one needs oneself, buying and selling are necessary parts of virtually every modern person’s life.

In our modern world, we can begin to see a sort of Mark of the Beast: While ideas and even objects aren’t banned, they are increasingly difficult to come by, not due to government fiat, but due to the machinations of corporations hostile to the American values of freedom.

One can be in favor of the free market while recognizing a simple truth: There is no way that America’s Founding Fathers would have sat on their hands while five corporations dominated American discourse and commerce. It is hard to imagine, for example, the Founders suffering a single private bank processing most of the payments in the United States and refusing to do business with gun merchants. Alternately, one can scarcely imagine that the Founders would have sat still for three companies – all of them hostile toward American values and the Constitution – dominating political discourse and deplatforming anyone who opposed them.

This is the situation in which we find ourselves as a nation today: Guns are not illegal, but private companies will make it increasingly difficult to buy, sell or own them – up to and including pulling your bank account. You have all the freedom of speech you like, but prepare to be deplatformed or have your voice buried by large tech corporations with their thumb on the scale of American discourse.

As the American economy has become more corporatist – such that the market is controlled by the interrelation between monolithic mega-corporations, Wall Street and the state – and less capitalistic and dynamic, the American press and economy are now being dominated by forces hostile toward the American public and American values.

No less an authority than James Madison warned Americans that the First Amendment alone was not enough to protect free speech. In Federalist No. 47 and Federalist No. 51, he argued that the separation of powers was necessary to protect free speech by preventing one branch of government from accumulating too much power at the expense of the others and, indeed, the rest of society at large.

This is an important point to remember when considering the First Amendment implications of Big Tech and its war on free speech and gun freedom. The Founding Fathers did not live in a world where a few large corporations had more power than the (incredibly limited and power impoverished) government had, either at the federal or the state level. It’s doubtful that they could have conceived of such a thing.

But they did carefully consider the problem of centralized power as it pertained to the rights enshrined in the Constitution. At the end of the day, the Constitution is just a piece of paper with no ability to enforce itself. What’s more, if the Founders did not address the notion that the private sector could meaningfully and substantially circumvent rights for all Americans, it was simply because they could not conceive of such a thing, not because they were writing the private sector a blank check.

Who needs to pass gun control laws anymore? The left can simply appeal to payment systems, banks and processors as a method of non-state gun control.

Case in point: Andrew Ross Sorkin’s December 2018 article decrying credit card companies for “financing” mass shootings. As with many arguments from the left, the premise is flawed, but very simple: Because eight out of 13 shootings that killed more than 10 people in the 2010s involved a credit card purchase (though, as always, it is worth asking what counts as a mass shooting and what is being left out of the tally – more on this here), credit card companies have a responsibility to step up and stop allowing their customers to make purchases for firearms using credit cards.

This effectively amounts to a request for banks to begin surveilling the legal economic activity of their customers.

It’s not far-fetched to consider that some mass shootings have been facilitated by credit card purchases. The Orlando nightclub shooter Omar Mateen as well as Aurora theater shooter James Holmes used credit cards to purchase the weapons and ammunition they ultimately used to commit mass murder.

But mass shootings, particularly those not part of urban gang warfare, are incredibly rare, despite the overwhelming amount of media attention paid to them. What’s more, while statistics for such would be difficult to formulate, the vast, overwhelming majority of firearms and ammunition purchases made with credit cards are made by law-abiding citizens for entirely legal purposes. For most Americans, firearms purchases can be a spike in their normal spending for the month. And what of it? The call for credit card companies and other payment processors to monitor the economic activity of law-abiding citizens would cause an outrage if the government were to do it, so why is the American public supposed to sit still for an invasion of their privacy simply because a private company is performing the surveillance?

Anyone who has ever made a firearms purchase knows that the bill can add up quickly. The oft-demonized AR-15 can easily top $4,000 when the price of a scope, rifle case and a decent cache of ammunition are added to the bill. Even a humble handgun purchase can quickly hit over $1,000 when a good holster and ammo are tacked on. This means that millions of Americans purchasing firearms for no reason other than recreation or self defense are going to have their personal finances investigated by a corporate Big Brother, with all the lack of transparency one can expect from a massive bank whose starting premise is “guilty until proven innocent.”

The attempt by the left to get banks to snoop on legal purchases amounts to nothing more than the stigmatization of the exercise of one of the rights enshrined in our Constitution. And while some would argue that the Constitution only limits the government’s actions, it must constantly be asked why we should allow for such an intrusion into our private lives simply because a private company is doing it.

“If you don’t like it, just make your own credit card company.”