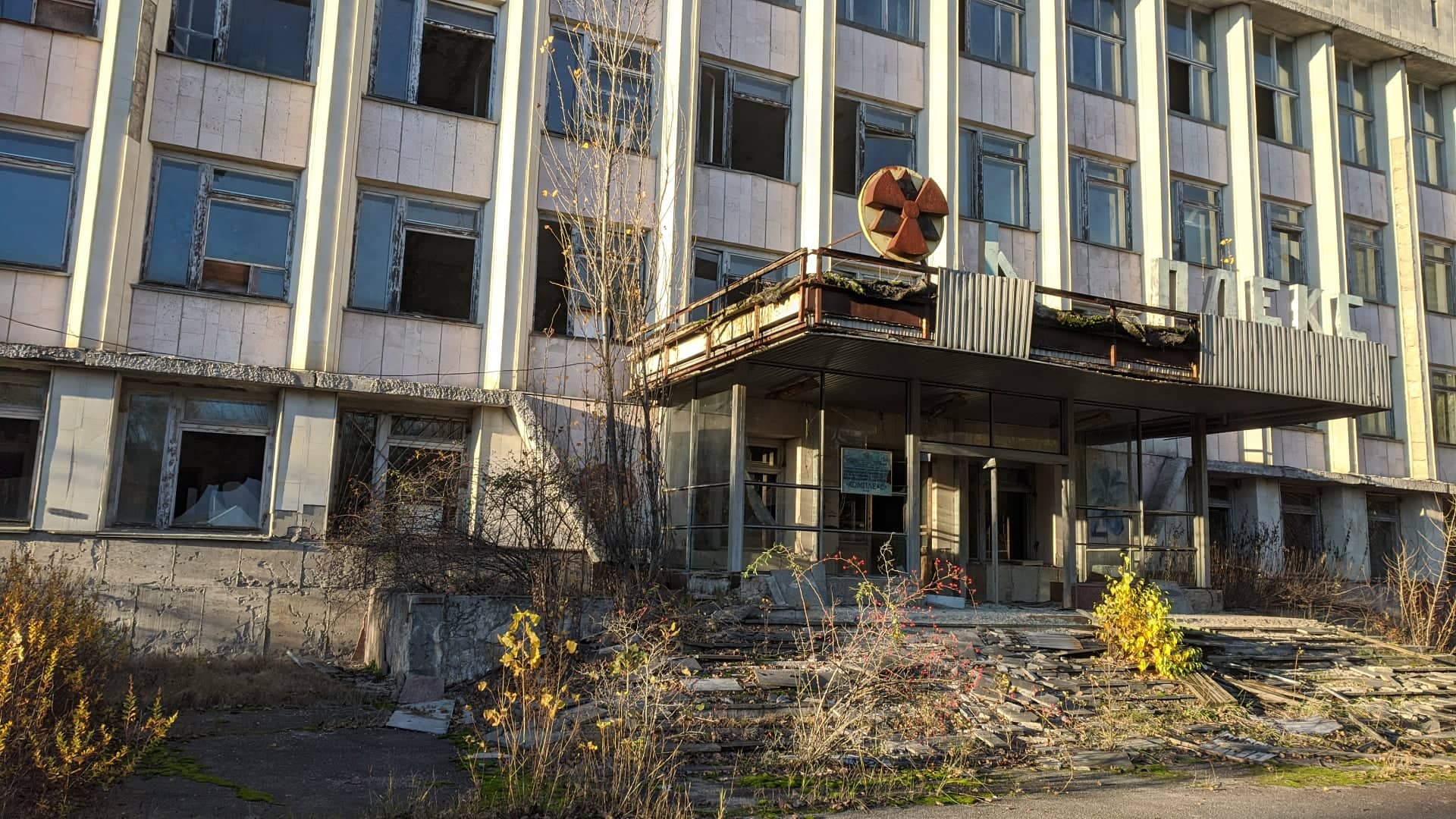 Chernobyl is arguably the closest real-life sampling of a post-apocalyptic world that you can access on a day tour. It’s the stuff of Misfits horror-pop. It’s the ultimate (morally questionable) disaster tourism. And it’s worth all 2,800 UAH ($100).

Traversing through what were once streets made of concrete and paint, which have been cracked and eroded by nature for 34 years, a tour guide cheerfully and helpfully explained the ruins surrounding us to our tour group of ten.

For her, this was surely a routine; she probably had a walk through a nuclear disaster site 5 days a week. To us who listened to her stories, it was a whole new world.

Like other museums, the outdoor remains of the biggest nuclear explosion meltdown in history are now open to inspection by the public via a sanctioned tour guide with a Geiger counter and a picture-book of how the area appeared in 1986.

And, as in other museums like Auschwitz, the air was heavy on the footpaths through the urban decay. The vibe was ambient despair– the metaphysical residual of the things that happened here. The November sky was cold and distant. 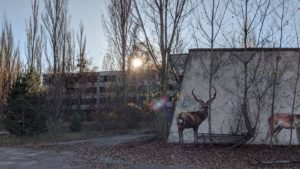 The remnants of the social forces that constructed the nuclear site in the first place on this strip of seemingly unremarkable land on the vast steppes of Eurasia are still erect. The radiation didn’t destroy them, unlike their biological engineers who died of radiation poisoning.

The iconography of the overseers is still intact, though the glory has faded. 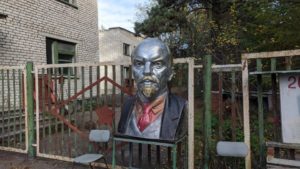 If there is a central lesson to Chernobyl, it’s that the hubris with which we manipulate our physical reality and the materials within it – whether through pharmaceutical drugs, rapacious mineral mining, or nuclear experimentation –carries the potential of horrendous consequences for ourselves and the ecology around us.

Far from Gods, humans are only slightly evolved monkeys. We know not what we do.

Chernobyl should have been a call for humility. The still-burning nuclear reactor came within hours of forever poisoning the entire continent of Europe and beyond. Hundreds of millions of casualties would have ensued. The suffering would have been unimaginable – but for a few hours.

Devastation on an unthinkable scale was averted by mere hours.

Instead of acknowledging their errors and immediately working to correct them, the Soviet authorities did what all governments do – they lied and covered up the incident until it no longer became plausible to deny because of radiation floating to the free world. 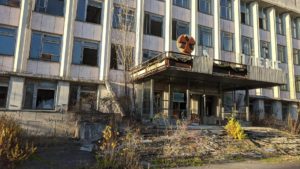 Reminders that shock the conscience hardest are the smallest ones – here, they were decaying stuffed animals left on the disrepaired floor of a former family home – something abandoned which had once been so treasured. 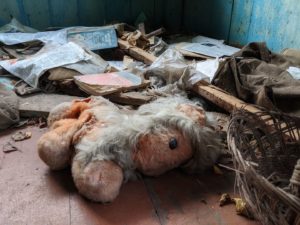 Pripyat — the city adjacent to the nuclear plant that housed engineers and their families — was actually a cosmopolitan municipality by Soviet standards.

As our knowledgeable tour guide explained, the ranks of the workers were generally superior to the average Soviet, and so they were allowed in their nuclear city access to resources like supermarkets that were traditionally off-limits to the meager amenities of life behind the Iron Curtain. 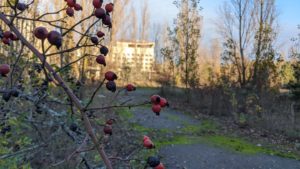 The reality of the human devastation is driven home by the remains of what we take as unremarkable everyday materials – like shopping cars – left frozen in place in heaps of rubble. Because the radiation sticks to surfaces, human hands may not have touched them since 1986. They may never again.

The atmosphere is a mixture of fall and spring. Yes, the air is cold and the sky seems more distant here than even in other regions of gloomy Eastern Europe. Nonetheless, there is something springlike about the abandoned village – it’s clear that something, at the very least, has managed to grow in the absence of the humans who fled. The background, ambient springtime reminder that life carries complements the darkness of the scene.

Shrubs and even trees grow out of the broken cracks in the pavement.

The quarantine zone – the so-called 30 km “exclusion zone” that was evacuated by the Soviet military in the ensuing days of the reactor destruction – is now one of the only remaining homes to wild horses left in the world. They moved in after the humans left. The same with grey wolves, whom researchers now believe may spread mutated DNA beyond the borders of the forbidden zone.

Eager scientists – well-intentioned, many of them — push their research and implementation agendas far beyond the capacity of their foresight to predict the future consequences. So it was with nuclear energy and so it is for the unproven mRNA vaccines curing under development at a frantic pace.

In 2020, decision-making authorities are in danger of the same hubris clouding their judgment of COVID-19 vaccines that befell the Soviet Union in Chernobyl. Vaccine manufacturers have paid out over $4 billion dollars in damages so far to the Vaccine Injury Compensation Program – one must wonder how much they will eventually be forced to pay out to the families of the inevitable victims of an unproven mRNA vaccine distributed to 7 billion people?

Rest assured, though, that the payout will pale in comparison to the profits generated for the pharmaceutical giants that foist their drugs on the American people via de facto government decree.

Classical literature record is replete with warnings against, out of hubris, playing God with forces beyond our limited wisdom; such a moral lesson was the entire point of Frankenstein.

You wouldn’t trust a monkey behind a cockpit because he is incapable of foreseeing the drastic consequences of his actions – and even less equipped to correct course and save the day.

The ratio of what the best scientists on the planet know about any given scientific line of inquiry is minuscule compared to the knowledge there is to be gained through further study – and the necessary wisdom to apply it to use.

The tragedy of unforeseen consequences is palpable in what were once the neatly paved streets of Chernobyl.

Ben Bartee is a Bangkok-based American journalist, grant writer, political essayist, researcher, travel blogger, and amateur philosopher. Contact him via his portfolio or on LinkedIn.