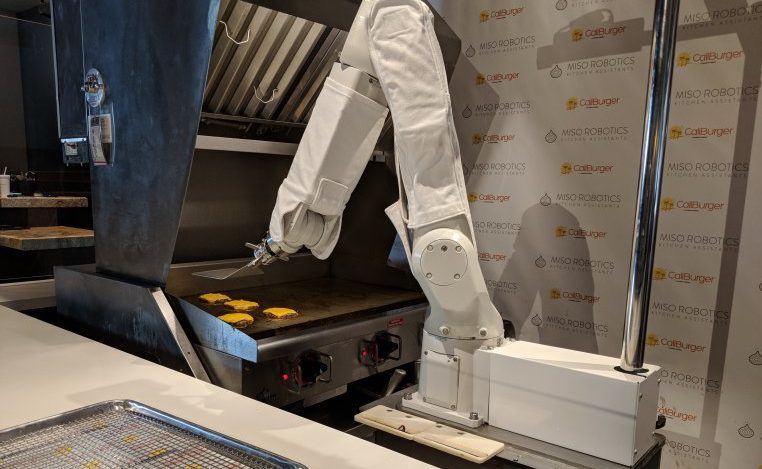 No one should have to compete with robots. That is why everyone should strive to do what robots cannot.

Flipping burgers and taking orders are quite easy tasks for robots. We have already seen touchscreens offer an alternative to human cashiers. Now robots are starting to replace the backroom staff.

Flippy still requires some human help, but its learning. Flippy’s boss though says he is already better at his job than most workers.

A little quicker, he doesn’t mess up as much. The funny thing is that when you watch him scrape the grill after these burgers are done, he actually does it better than my average employee.

The added benefit is that Flippy can’t feel pain, and so no one is at risk of getting burned by the hot grill. And the owner doesn’t have to worry about getting sued or shortstaffed. Then again, I wouldn’t be surprised if robot unions aren’t far behind.

Easy to laugh now, right? But Flippy is learning fast. Flippy and his cousins will start by taking over the service industry. But they won’t stop there.

Robots will continue to do more and more complex tasks, putting more and more current jobs at risk. But some jobs of the future have not even been imagined yet. For the jobs that remain, people might get paid the same for working a quarter the time. Other fun jobs like coaching or singing could become full-time gigs for more and more of the population.

Think about the amazing people that volunteer their time for neglected kids, or abandoned elderly in nursing homes. These people can turn their charity into work, and help a lot more people in the process. Human interaction will carry a premium. Just being a pleasant and joyful human being will be in high demand for employers.

What this does mean though, is that in the modern economy, you cannot simply get a degree and expect that education to serve you for 40 years until retirement.

People who talk about “living wages” for low skilled labor must think very poorly of their fellow humans.

I laugh when low skilled workers are replaced by robots not because I have contempt for low skilled laborers. On the contrary, I am glad for them.

Stagnancy is a horrible fate. Seeing people settle for less is depressing. And some percentage of people who get replaced by Flippy the Robot will go on to do great things. But only if they advance themselves and their skills. They should strive to do what robots cannot.

Robots taking jobs is a good thing. It increases the overall wealth of society. It drops prices for customers, which means their money goes further and can fuel other sectors of the economy.

If a robot drives a shipping truck instead of a human, that means shipped goods cost less. Now you can spend your money on going to the Opera. But don’t worry about the truck driver, he wanted to be an Opera singer all along!

But seriously, everyone replaced by robots is being given an opportunity to do more with their time, to do something more enjoyable, fulfilling, and useful.

Robots free people from menial tasks. Robots free up the most valuable resource, time. That is a gift. Humans’ most valuable tool is not their hands, it is their brain. And I believe in my fellow humans enough to know they can put that brain to work and thrive in the modern economy.

But other people don’t want to believe in economic realities. I truly believe that future societies will produce enough wealth that even those who do not want to work will be able to live off the system. But they still won’t be happy. They will still feel they are owed more than society gives them.

Too many people see jobs as a means to an end. But robot workers should remind us that productive work can be so much more. We are coming into an age where virtually no one will have to worry about putting food on the table or finding a place to sleep.

Then without feeling compelled to flip burgers to pay the bills, people will have the opportunity to contribute to bringing themselves and society to unimaginable heights.

Opportunity is the keyword. Society will move on with or without you. Don’t try to hold it back by preserving jobs and labor that is not necessary. That is a fear based response.

Rejoice for robots, because it means people can follow their passions, instead of running on the treadmill just to keep up with everyday life.