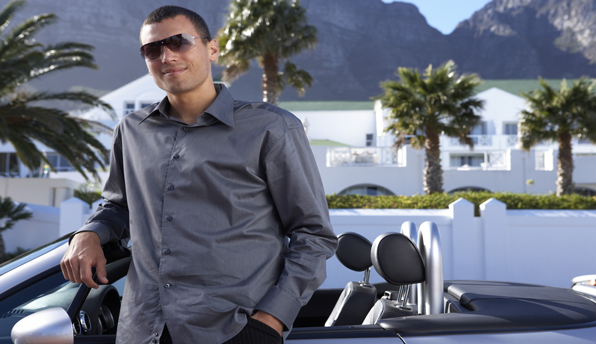 Ex-Bankers Upgrade the Good Life to Get a Violin-Shaped Pool … What's ambitious about Jay Dweck's bathroom isn't the television by his whirlpool tub or the screen that will face his toilet and bidet. It isn't the wide nook in his shower for a third TV and one more across from the sink, or his plan to have each turn on automatically when he's nearby. It's that Dweck, a former Goldman Sachs Group Inc. and Morgan Stanley executive, wants to sell fellow bankers on renovations like the one at his $4.8 million house an hour's drive north of New York in Bedford Corners. "I always have visions and dreams of things you can do, and this is a realization of something," Dweck, 58, said near his violin-shaped pool, where about 5,600 fiber-optic cables light up like multicolored strings. – BusinessWeek

Dominant Social Theme: Innovation is the soul of capitalism.

Free-Market Analysis: Let the good times roll. Once again, monetary inflation is being confused with high-end entrepreneurialism. If there was any question about our Wall Street Party meme, this article should help dispel it.

Always, these sorts of articles show up when the stock market is booming. Usually the articles have to do with high-end cars, or the art market, or the sudden expansion in the value of, say … stamps.

The idea is always the same: Someone has discovered an investment, industry or company that not long ago was considered dormant – or not even considered at all – but now may be thought of as a coming attraction, even the Next Big Thing.

And so it is with this article. Here's more:

"The idea is to improve quality of life using technology." The company he registered last month, Live Better Systems LLC, will have competition from Wall Street veterans working to make the good life better.

In a year when Thomas Piketty's book on swelling inequality sold out on Amazon.com, the former bankers don't see their upgrades as indulgences for the pampered, according to interviews with half a dozen of them. They call them innovations that will spread.

"We're launching this brand and launching this movement," Paul Scialla said before a tour of the $50 million penthouse his company, Delos Living LLC, is selling with posture-boosting cork floors, purified air and antimicrobial coatings in New York's East Village.

"There's so much attention focused on the environmental impact of buildings, and we didn't think there was enough focus on the human."

Scialla, 40, was co-head of U.S. interest-rate products cash trading at Goldman Sachs last year when he and his twin brother Peter left the firm's partnership pool to expand Delos. It's bringing "curated environments that optimize health" to Las Vegas hotel suites, Philadelphia dorms and Los Angeles offices, according to a website that describes lighting built around circadian rhythms and Vitamin C-infused showers.

The two apartments the company has sold in its five-unit building on East 11th Street went to actor Leonardo DiCaprio and author Deepak Chopra, both Delos advisory-board members. Scialla said the company and affiliate International WELL Building Institute do more than house celebrities, and that he left Goldman Sachs when he envisioned the potential social benefits and financial rewards.

"If we can scale this and get this to as many people as we can through real estate, that's a real big win," he said, citing hospitals and affordable apartments as options, along with housing for Haitian orphans the company has pledged to build.

"Anything with four walls and a roof can be infused with this thought." Last month, former Lehman Brothers Holdings Inc. vice president Monica Kirchner also cited mass appeal, or a version of it, after she began selling the first websites that end in .luxury instead of .com.

Kirchner, whose Beverly Hills, California-based Dot Luxury won an auction for rights to the domain, said her target audience spans "ultra-high net worth all the way into just your middle income." Her firm's website skews to the former with a photograph of a grinning woman on a yacht. "Welcome to .Luxury," a greeting below says. "We've been expecting you."

The article goes on like this, prattling foolishly about beneficial effects of capitalism (when the operative influence is monopoly money printing) and of course attempting to turn high-end expenditures into some sort of philosophical statement.

One of the reasons we honor Ludwig von Mises, the great Austrian economist, is because he was not fooled about the wealth effect of modern finance and, indeed, with his colleague FA Hayek dealt a devastating blow to the ever-reoccurring idea that "this time it's different."

It's not different. Never. It just depends on where you are in the business cycle.

And while we are on the subject, let us point out that this sort of article is proof once again that people are indeed prone to misapprehending such cycles no matter how smart or sophisticated they are. Over and over, people who should know better conclude that a temporary wealth effect is a permanent reality.

Bill Clinton did so when he declared that the business cycle had been retired during his administration. A little bit later the tech crash occurred. It is always the same, like clockwork. The money flows and the optimistic analyses begin.

One of the most famous and insufferable commentators in this regard was the late (non) lamented John Kenneth Galbraith who found his voice in the 1950s and 1960s writing such books as American Capitalism (1952), The Affluent Society (1958) and The New Industrial State (1967).

Here's something from Wikipedia describing the themes inherent in such books as The Affluent Society.

The "central tradition" in economics, created by Adam Smith and expanded by David Ricardo and Thomas Robert Malthus in the late eighteenth and early nineteenth centuries, is poorly suited to the affluent post-World War II U.S. society. This is so because the "central tradition" economists wrote during a time of widespread poverty where production of basic goods was necessary. U.S. society, at the time of Galbraith's writing, was one of widespread affluence, where production was based on luxury goods and wants.

Of course, little more than a decade after the publication of The Affluent Society the US government was so broke it had to abandon what was left of the gold standard, the price of gasoline galloped upwards and soon enough interest rates hovered close to 20 percent.

So much for the Affluent Society.

Like a bad penny, this dream often recurs when the Fed has dumped enough money into the economy. These funds slosh around in the recesses of commercial banks and financial firms and then gradually find their way into stock markets and thence into high-end real estate.

We are obviously at that point now.

Last month, before the tour of the Delos penthouse, Scialla showed the Manhattan Meatpacking District loft he shares with his brother. It, too, features a television in the bathroom. There's also a signed poster of Oliver Stone's "Wall Street," two pianos and Delos features including cork floors and blue-shaded lighting to boost morning energy. Across from the kitchen's industrial-size juicer and a shelf of wheatgrass were two bottles of Patron tequila. "Well," Scialla said, "it's all about balance."

No, Mr. Scialla, it's about the predictable recurrence of the effects of monetary inflation in a monopoly central banking economy. The US economy is surely headed up – or at least stock markets are – in the near term, as we have predicted. In the long term, the "balance" Scialla refers to will reassert itself with a vengeance.